The meat rather than the noodles are at the core of this dish by executive chef and partner Mike Morales of Sunda, with locations in Chicago and Nashville.

He starts with a broth of duck stock, oxtail jus, fish sauce, star anise, cardamom pods, cinnamon sticks and cloves. He braises beef short ribs in that and then plates the meat with mung bean noodles, cilantro, Thai basil, sliced red chiles, hoisin sauce and sambal. He adds lemon grass and lemon balm to the braising liquid, which is poured from a cast-iron teapot tableside

For this small plate at The Bar at Willett, which opened in September at Willett Distillery in Bardstown, Ky., executive chef John Sleasman braises turkey tails, then fries them, and then finishes them over a hot grill fired by Japanese binchotan charcoal. He glazes them in a combination of honey, smoked tamari, charred peanuts, green Sichuan peppercorn oil, chives, Korean chile pepper and vinegar. It’s garnished with Thai basil and lime.

This seasonal dish at Little Tong Noodle Shop in New York City features butternut squash and tofu instead of the more usual spiced pork. It also has preserved duck yolk and spiced peanuts all over mixian rice noodles

Cascara, the fruit outside the coffee bean, which until not long ago was generally discarded, is increasingly being consumed as a treat in its own right, such as at 7-unit Klatch Coffee, based in Rancho Cucamonga, Calif. There the cascara is steeped in hot water with black tea, ginger, brown sugar, vanilla and orange blossom water and topped with steamed milk.

How do you justify a $19 price tag for a grilled cheese sandwich? At Center Bar at the Time Warner Center in New York City, executive chef Michael Lomonaco does it by using Fontina Fontal cheese and truffle butter on country white bread that he serves with a side of fig jam 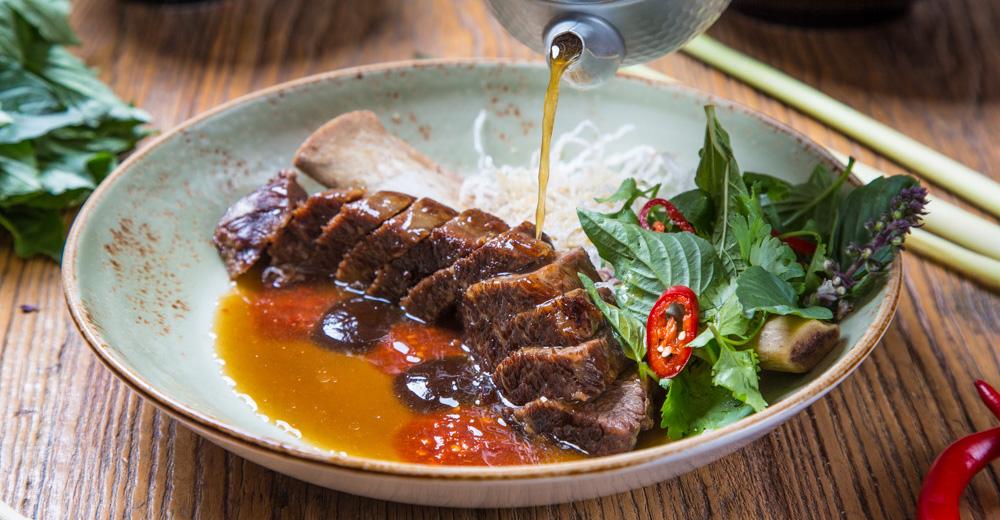