Andrew Sutin, chef of Market Table in New York City, makes use of the bounty of the state’s Hudson Valley for this dish.

On the bottom of the plate is a vinaigrette made by charring Eckerton Farms heirloom cherry tomatoes and then roasting them until they burst, then deglazing the pan with white wine and emulsifying that with olive oil.

Next is a warm pilaf made with quinoa instead of rice that he dresses in the house vinaigrette, made of sherry vinegar, shallots, olive oil, Dijon mustard, salt and pepper. Sutin also tosses into the pilaf whatever herbs are growing at the restaurant.

The ratatouille itself is made by roasting gold bar squash, zucchini, graffiti eggplant and red bell peppers with olive oil and dressing it with fresh oregano, lemon zest and Aleppo pepper.

Then that’s mixed with a mushroom ragù made by simmering mushrooms with tomato and confit garlic and adding balsamic vinegar.

The dish is accompanied by a salad of frisée and baby mizuna lettuce in the house vinaigrette.

“My inspiration behind this dish was really trying to give our guests a healthy, vegan, and gluten-free entrée that wasn't just an afterthought like many vegan dishes so frequently are.” Sutin said. “Having it be its own delicious, gorgeous, and craveable entree, I wanted to put as much love and care into this dish as I would a roasted halibut or a dry aged New York strip steak. I think by embracing the Hudson Valley's oasis of summer produce, we were able to create something super soulful: It's warm, bright, satisfying, and nutritious all at the same time.”

Creamline Beer Garden opened this summer at Chelsea Market in New York City and is serving this potent ice cream float inspired by owner Harris Mayer-Selinger’s study of beer and food pairing at the Cornel University School of Hotel Administration, where he noticed that stout beers are often described as having chocolate and coffee notes. It was in that class that he first added ice cream to beer.

But for this item, he actually uses black lager, not a stout, from Catskill Brewery in Livingston Manor, N.Y. Mayer-Selinger says that beer has a cocoa nib-like bitterness as well as the aromas of coffee and chocolate that are classic flavors of stouts.

“It makes the sweetness from the ice cream pop,” he says. He fills a 16-ounce shake glass 2/3 of the way with a swirl of their chocolate and vanilla soft serve ice cream made with local Ronnybrook Farms cream and then tops it with the beer.

He serves it with a spoon, a straw, and the remainder of the beer in the can.

Sara Clark, the beverage director of The Dearborn in Chicago, makes this drink by shaking 1.5 ounces of Sipsmith London Dry Gin with ¾ ounce each of bianco di Torino Tempus Fugit Alessio Vermouth and a gastrique made from celery juice and concord grape ice wine, plus two dashes of The Bitter Truth Lemon Bitters and a dash of dried butterfly pea flower.

That’s strained into a coupe, topped with 1.5 ounces of Prosecco and garnished with a ball of honeydew melon that has been macerated in Chareau Aloe Liqueur.

Omri Aflalo, chef and partner of Tribune, located in the Tribune Building in Oakland, Calif., gently caramelizes white chocolate until it takes on slight nutty notes and then folds that and some crème fraîche into his cheesecake batter. That’s poured into a graham cracker crust made with brown butter, baked low and slow to keep it creamy, and then tops it with house-made toasted marshmallow fluff and garnishes it with shaved white chocolate and edible flowers.

It’s also accompanied by a seasonal compote (not pictured).

Vincent Huynh, chef and co-owner of Indianola in Houston, says the highlight of this dish is the heirloom Hopi Blue cornmeal that is ground for the restaurant by Barton Springs Mills in Texas hill country.

He mixes that with buttermilk, butter, salt and bacon powder and bakes that into cornbread in an iron skillet. It’s served as soon as it’s lifted from the skillet, brushed with a butter flavored with saffron and corn and topped with local queso fresco. That’s all garnished with powdered kaffir lime leaf, green chile and lemon grass. 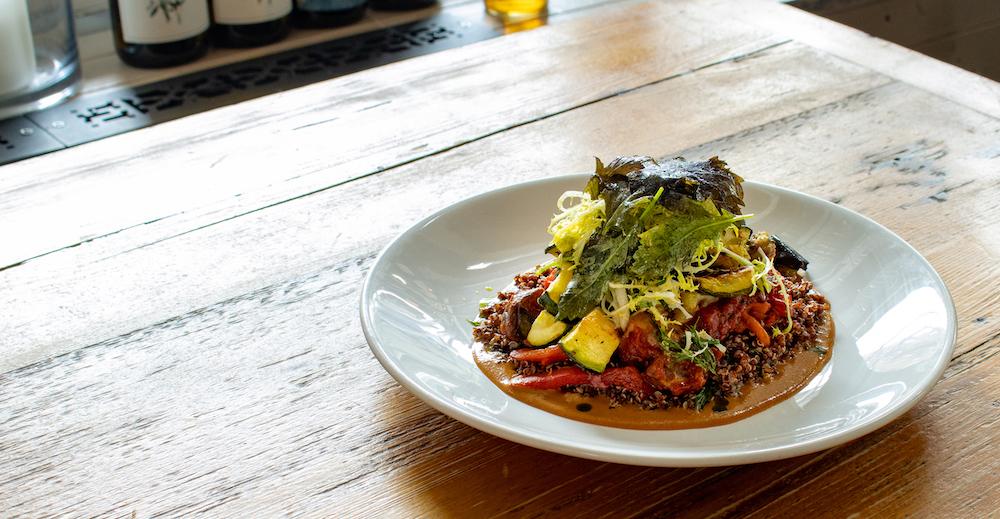