At Red 8 restaurant at the Encore Boston Harbor resort in Everett, Mass., executive chef Richard Chen updates Thai green papaya salad with the use of geoduck clam to add chewiness and extra variety.

He makes a fine paste of garlic and Thai bird chile, heats it to release the flavors and then adds shredded green papaya. That’s followed by dried shrimp, Chinese long bean and a combination of equal parts fish sauce and lime juice sweetened with palm sugar. Then he adds sliced cherry tomatoes and finally sliced geoduck that has been cured ceviche-style in lime juice and vinegar. He plates it over banana leaves and garnishes it with crushed roasted peanuts.

Broiled clams, often cooked on the beach over or in an open fire, are a summertime treat throughout the Eastern United States. At La Marchande at The Wall Street Hotel in New York City, chef Rick Horiike draws inspiration from that local custom, and uses little neck clams from nearby on Long Island, for this dish, for which he poaches the shellfish in a bath of butter seasoned with vermouth, parsley stems, ginger — to add a cosmopolitan flair — and pickled ramps for a bit of seasonality.

This shell-shaped pasta dish is a favorite of David Tanis, chef of Lulu in Los Angeles. He dices onion and summer squash — green and yellow — and cooks it slowly in extra virgin olive oil. Then he cooks the pasta, drains it and puts it in a bowl over the cooked vegetables. Then he adds a large spoonful of ricotta, a handful of shaved Parmesan cheese, strips of torn squash blossoms, chopped basil, some lemon zest and a drizzle of pesto.

At Occitania in Oakland, Calif., chef and owner Paul Canales partially debones squab, except for the legs, which he keeps for dramatic presentation. He seasons the bird with salt, pepper and thyme. He grills the breasts to medium rare. He dusts the legs with rice flour and potato starch and fries them. Then he sautés the livers, removes them from the pan and sweats shallots with thyme. Then he deglazes the pan with a sweet wine and adds that to the liver which he purees with softened butter to make a pâté. He finishes the plate with lightly dressed arugula and a drizzle of green olive tapenade.

At Millstream in Woodstock, N.Y., chef Dan Silverman braises large white corona beans in the oven with tomato, celery and onion studded with cloves until the beans are tender and creamy. Then he dresses the with olive oil, parsley, spring onions and Aleppo pepper. That’s topped with long, thin pieces of celery in a lemon vinaigrette and then garnished with large Spanish anchovy fillets, celery leaves and shaved Parmigiano-Reggiano. 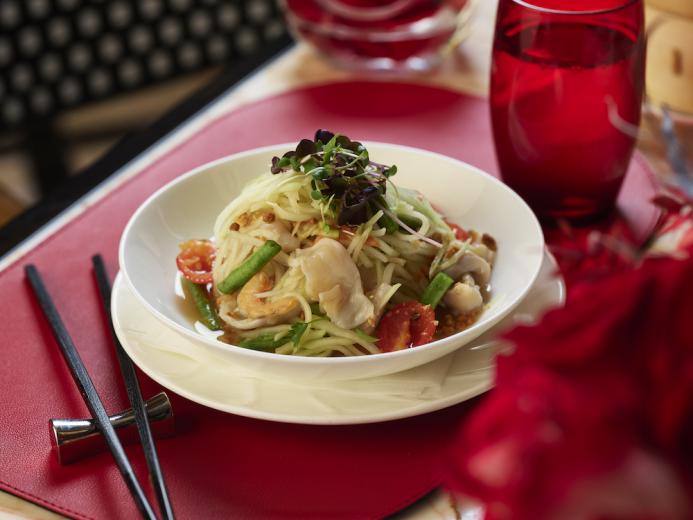 Next Up
New on the Menu: Preserved lemon pizza and corn soup with crab salad
Start Slideshow ›