ADVERTISEMENT
Started on a shoestring

“I didn’t realize it would become a big national sensation,” Fish said of the first shop he opened in 2006. “I just wanted to open up a small restaurant and bar in Lakewood, Ohio, and support the community there. I wanted a little hole-in-the-wall restaurant that serves really good food and craft beer.” That unassuming attitude, built at the site of the old Bud’s White Door Saloon, may have been the secret to success, along with over-the-top melting masterpieces of cheese, pierogis, kimchi, pork belly and more.

Cool and cozy, but due for a facelift

The kitchen behind the renovation

“The kitchen was the major reason for the renovation project,” Fish said. “It was a really small kitchen, really tight with six or seven people and hard to operate. Our menu had gotten more complex. At all the other restaurants, we were able to build bigger kitchens to handle the guests and make the menu.” The kitchen was gutted. Two small fryers were upgraded to a larger fryer, new flattops were added, along with more sauté stations and coolers, “so the guys and girls in the kitchen don’t have to run up and down the stairs all day for more product,” Fish said. A new dish machine was added in the footprint of a former serving station to give the kitchen more room.

“The only way we could do it and do it right was to literally close the restaurant for a month,” Fish said.

Fish said that the other restaurants made it possible to redo the original with minimal financial disruption. However, he added, “you’re spending money but not making money.”

The old-fashioned, kitschy lawn ornaments are part of Melt’s DNA, and Fish had no intention of drastically changing his aesthetic.

“The old flow of the dining room made it hard to operate for employees,” Fish said, referring to a blocked-off area near the reception desk and bar. “I did [the remodel] for my staff in Lakewood because we have a really good management team and staff who’ve been with us for a while, but the location was very difficult to work in.”

The Melt team takes pride in Cleveland sports and the city’s rock ‘n roll reputation, so a lot of original memorabilia found its way back to the walls.

The Bud’s White Door sign from circa 1940 survived the renovation, a reminder of the bar’s blue collar, neighborhood bar roots. The two bars are more open and welcoming now and the original bar has been sanded down to the bare wood then finished like new.

A brand-new draft system keeps 24 (mostly local) beers ready to wash down all that grilled cheese goodness. And Santa’s still there.

The new restrooms are unisex and decorated with edgy street-style art.

Setting the stage for the next decade

“Since we’re in our twelfth year now as a company, we looked at this project and said this should get us another twelve years if not more,” said Fish.

“We really took the time, effort and the capitol to make this project 100-percent perfect so we don’t have to go back and change anything,” Fish said. 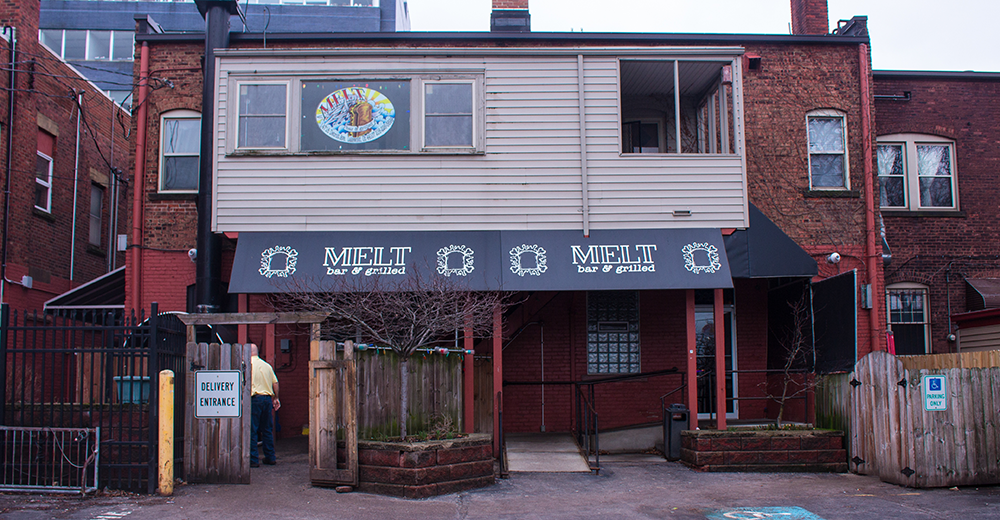