We’ve been around the block more than a few times and we’ve seen things. Good things, bad things, things that made us cheer, cry and yawn. What you’ll find in the following slides are things in restaurant land that made us cheer. What we’ve observed in the last year reaffirms our belief that you folks work in the coolest, most badass industry in the land. So, without further ado, we present to you the 2016 Editors’ Choice Awards.

At Atlanta’s Grain, chef Drew Van Leuvan creates something he calls Nitro Cap’n Crunch, which is made with popcorn, dehydrated apples, toasted and crushed peanuts and Cinnamon Toast Crunch Cereal. Caramel is drizzled over the mix. When an order is placed, the popcorn caramel mix is put into a bowl, along with two cups of liquid nitrogen, which freezes the candy. The liquid nitrogen is allowed to burn off and then taken to the table. The result is a tasty and dramatic snack item that gives off nitro vapor.

Unlike quick service, full service usually doesn’t have mascots. However, the folks at Punch Bowl Social have created an intriguing mascot to represent a concept that encompasses food, drink, bowling, and more. “We used a deer as a symbol of all things clean, natural and authentic,” says Punch Bowl founder and c.e.o. Robert Thompson. “The natural progression was to put a suit on our deer and develop his personality. A well-dressed deer is welcome at any party for any occasion at any time,” he says. We don’t know where you party, Robert, but can you get us in?

We’ve been fans of chef Marc Forgione for a long time. In fact, we named him a Rising Star back in 2008, and two years later he earned a coveted Michelin star for Restaurant Marc Forgione in Manhattan. That same year he was crowned winner of the Next Iron Chef competition. This guy is a top gun, which is why we were so excited to see him recently open a fast-casual spot, Lobster Press, in a new food hall called The Pennsy. The menu plays with a number of items from his big-time restaurant, including his hot lobster panini, featuring tail, knuckle and claw meat sandwiched between buttered ciabatta bread. It’s paired with a side of chili lobster dipping sauce. Since the lobster is caught every morning off the coast of Maine, the price fluctuates at market price, but for around $17, you get a mind-blowing lobster sandwich from a Michelin-starred Iron Chef. Give us some elbow room—we’re dunking!

The pricy tasting menu at New York City’s famed Eleven Madison Park will set you back $295, which could be a big ouch for many people, though the terrific cooking of chef Daniel Humm will soften the blow. But you get a nice parting gift, a jar of addictive granola that includes oats, pistachios, dried cherries and pumpkin seeds. “We want you to wake up and not worry about breakfast. As you screw off the top of the Ball jar, you can think about the incredible meal you had the night before,” says Humm.  “With a base of rolled oats, maple syrup, and brown sugar, we change other ingredients seasonally. Sometimes it may have unsweetened coconut chips, other times dried sour cherries and pistachios, but I also love to bring some savory elements to the mix, with a little extra virgin olive oil or salt.”

Leghorn is a fast-casual, socially conscious chicken shop with two locations in Chicago. It’s known for outstanding fried chicken sandwiches and its disgust of “corporate b.s.” The folks at Leghorn are proud champions of gay rights and their shops are referred to as the “anti Chick-fil-A.” So, as you can imagine, Leghorn is promoting its cause in a most anti-corporate way; by offering free branded condoms at the counters of both restaurants. Now that’s what you call a full-meal deal!

Did you know chefs love pork? Of course you do; a million chefs in America have some image of a pig tattooed on their body. We’re cool with that. But in a sea of tattoo ink, Chicago chef Mindy Segal stands alone. The 2012 James Beard award winner for Outstanding Pastry Chef in the Country sports a shoulder-to-shoulder back tattoo of her grandmother’s china pattern. “I have her set of china and it’s beautiful,” says Segal. “I wanted to get it on my back in tribute to her.” Chefs love pork; Mindy loves her grandmother. Case closed.

The folks at the Tack Room (a punk rock-inspired piano saloon) and the adjoining Dusek’s Board and  Beer in Chicago offer a foi-gras-topped burger called The Ace. A Slagel Family Farms Juicy Lucy burger patty is filled with cheese and topped with the seared foie gras, pork rillettes, a sunny-side egg and bacon jam. Why call it The Ace? Ace is equestrian slang for a horse sedative called acepromazine. Eat one of these burgers and it’ll makes sense when you wake up from your nap.

When the purple one—Prince—does a concert, a rider in his contract stipulates, “One green tea set with ginger root, honey and cream, with a doctor on call to administer B-12 shots.” Can you blame his royalty for wanting a jolt of energy after a long performance? No, and you can’t blame Ada Street in Chicago for creating a three-course menu featuring the rider demands of Prince and other rock-and-rollers such as ZZ Top, Aerosmith and the Foo Fighters. Prince’s demands inspired a dessert course of green tea ice cream, honey whipped cream and a shot of ginger caramel. The shot, as you can see here, is delivered in an unusual and creative way. You may not have a hypodermic of B-12 at the ready, but a shot of ginger caramel is easier had and could energize a cringe-worthy air-guitar performance.

Ingredient of the year

Whoever came up with the idea of whole-roasted cauliflower is a genius. Here’s a dirt-cheap vegetable that has forever wallowed in obscurity, but now it seems to be popping up on menus all over the country. Why? Because roasting brings out its flavor and, because of its relatively neutral nature, it can accept a million flavoring agents to suit one’s purpose. And when it arrives at a table in its whole state, it’s a show-stopper. At Domenica in New Orleans, roasted cauliflower is paired with sea salt and whipped feta. At Bar Toma in Chicago, it comes with a side of whipped goat cheese. At Nashville’s Etch, roasted cauliflower is served with truffled pea pesto, feta dip and salted almonds. The best thing of all? A head of cauliflower costs nearly nothing and commands an impressive price ($18 at Domenica; $12 at Bar Toma; $10 at Etch). Your accountant will love whole-roasted cauliflower as much as your customers.

Every year a hordes of new restaurants open and add to an already cluttered field of dining-out options. How do you get noticed in a sea of choices? A great restaurant name is a good start. Late last year Brian Washington-Palmer opened Sexy Taco/Dirty Cash, which serves San Francisco-style street food in New York’s Harlem neighborhood. It’s a wacky 50-seat place that showcases Blaxploitation imagery and damn-good tacos, including the Sexy Ta-Cow (ground beef, Rice-A-Roni and cheddar). The dirty cash part of the name comes from a Claude McKay novel, Home to Harlem, which refers to “dirty cash” being used to buy adult entertainment. In this case, the adult entertainment is delivered at the bar through a selection of fun and interesting cocktails with names such as The Foxy Brown and Sin on Wheels. Tacos and cocktails? Sign us up!

Marie Zahn, the beverage director for the ultracool Butchertown Grocery in Louisville, has created an entire cocktail menu based on the lyrics of Tom Waits. It’s a ballsy maneuver that required her to invent drinks that are as smooth as an ironworker in a tuxedo. Some of her Waits-inspired cocktails include Get Behind the Mule, Little Drop of Poison and our favorite, Stirring My Brandy With a Nail. The latter is composed of Copper & Kings American brandy, Drambuie, Laphroaig, Angostura and bitter-lemon sugar. The garnish? A nail, of course. One or two of these will surely put the cut back in your strut and the glide back in your stride.

If you’re a person of a certain age, you likely played a game called Time Bomb, a round, plastic “bomb” that had a fuse on top that you twisted. You toss the bomb to your friends and a timer in the toy eventually goes off and makes an explosion sound. Simple, fun, a bit nerve-wracking. Well, the folks at Sunda in Chicago have come up with a more fun, edible version of the game called The Gambler Roll. The sushi roll is cut into several pieces, with each piece, except one, containing sambal. Only one of the pieces contains a blistering hot ghost pepper. That piece will truly blow your pepper-loving head off. And your parents told you not to play with your food. Take that, mom!

Best Use of Leftover Product

At Restaurant 1833 in Monterey, CA, executive chef Jason Franey makes his own ricotta cheese, which he chars for a terrific beet salad. But making all that cheese leaves him with a lot of whey byproduct. So Franey collaborated with the bar team, which came up with a cocktail that combines the whey with Remy Martin 1738 Cognac, lemon and simple syrup. The cocktail, cleverly called No Whey, has allowed the kitchen to recycle approximately two gallons of whey per week. Can you say, cha-ching? 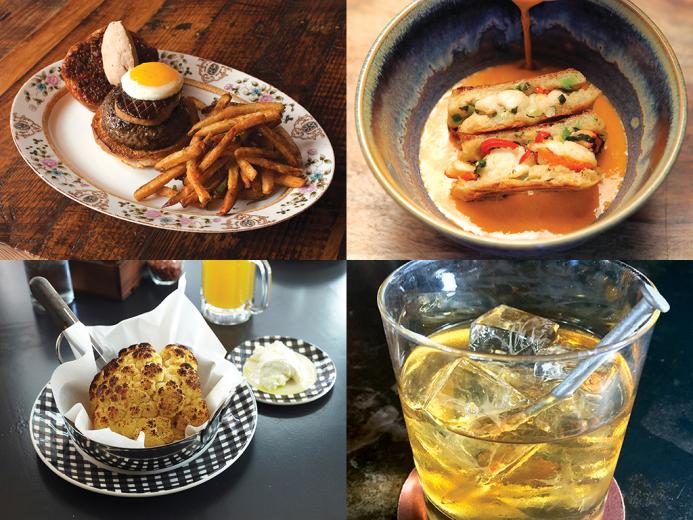