Chef-owner Maneet Chauhan was born overseas, but she fell in love with southern flavors. At her restaurant she merges the essence of her Indian roots with those south of the Mason-Dixon line. At lunch you’ll find an interesting tomato soup with grilled cheese, but Chauhan’s soup combines tomato and lentil curry, while the sandwich is adorned with a green tomato pickle. On the dinner appetizer menu is tandoori chicken poutine (pictured) with tandoori chicken, makhani sauce (a butter-based tomato cream sauce) and cheese curds. This dish extends its reach from Nashville to Canada, but with an Indian accent.

Don’t be fooled by the name. There is no connection to New Orleans here. Big Easy refers to the nickname of Ernie Els, the famed South African professional golfer and owner of this restaurant. He has infused an American-style steakhouse with the flavors of South Africa’s Western Cape region. Sure you’ll find meaty items like a double-cut lamb chop, but it will come with a side of South African-style barbecue sauce. You’ll also find standout seafood dishes, including the Cape Malay Seafood Pot (pictured), which features mussels, Nigerian prawns, fresh catch and coconut-curry broth.

Mexican flavors are among the most popular in the U.S., so it should come as no surprise that adventurous diners who are looking to expand their horizons would explore other Latin cuisines like Peruvian. What makes Peru’s food so enticing is its blend of several cuisines, including Japanese, Spanish and Chinese. One of the best to offer Peruvian flavors is Picca, a stylish cantina that serves classic Peruvian dishes like this trio (pictured) — beef heart skewers with walnut pesto (left), scallops with aji Amarillo mayo (center), and black code with miso and crisp sweet potatoes.

The popularity of Filipino food is long overdue, reports Andrew Freeman & Co., which put the cuisine on its list of top 2017 trends. Filipinos make up the second-largest Asian population in the U.S., and restaurants across the country are embracing it, including Purple Patch in Washington, D.C. Owner Patrice Clearly, who was born to a Filipino mother and an American father, dedicates half of the menu to her mother’s recipes and the other half to American classics. Some Filipino menu highlights include Pork Sinigan, a lemon broth soup with braised pork, long beans and jasmine rice; and Sizzling Sisig, which features chopped pork belly and shoulder with bird’s-eye chili, jasmine rice and an egg (pictured).

Nordic cuisine was relatively invisible in this country until recently, but then Noma in Copenhagen was ranked the best restaurant in the world three times in a row. That put the cuisine on just about everyone’s radar. Granted, Nordic cuisine is often connected to an upscale fussy treatment of fish and vegetables, but it  is slowly transforming and becoming more accessible. That’s certainly the case at Crêpes du Nord, which infuses the French crêpe with Nordic influences and flavors. The menu features both savory crêpes like the signature Crêpes Du Nord (pictured), which features cured salmon, scrambled eggs and dill crème; and sweet versions like Midnight Sun with raspberry sauce and marshmallow.

Despite being part of this country Hawaii and its cuisine have had little influence on the mainland. But that changed recently with the growing popularity of a Hawaiian dish — poke (pronounced poh-kay). The menu item can take many forms, but it basically consists of cubed raw fish, often tuna, with a variety of garnishes and dressings, such as salty seaweed, sweet onions, ginger, chili pepper and toasted sesame seeds. Poke is often served in a bowl, which has made it the darling of fast-casual operations that can prepare it quickly and easily. Consider, for example, this ahi tuna bowl with wasabi avocado cream from Wisefish (pictured).

French-trained chef Ana Sortun fell in love with Turkish ingredients after cooking with a Tunisian-born chef, and then traveling throughout Turkey to explore the country’s cuisine. That led to the opening of Oleana, which features the flavors of Turkey and the Middle East. Menu highlights include lemon chicken with za’atar (a blend of Middle Eastern spices); and seared haloumi (a cheese from Cyprus made with a blend of goat and sheep milk) topped with figs (pictured). 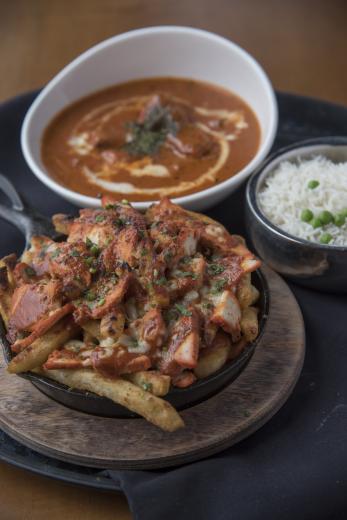 Next Up
Sponsored Content
Your skills. Our spices.
Start Slideshow ›