From a decadent salute to Marie Antoinette to a relaxed fast-casual dumpling shop, creative concepts across the country are piquing our interest this spring. Take a look.

An award-winning New Delhi restaurant has opened a second unit, this one in New York: Indian Accent, adjacent to the Le Parker Meridien Hotel. Chef Manish Mehrotra’s modern techniques and a combination of traditional Indian and global flavors result in small plates such as Sweet Pickle Ribs with sun-dried mango and onion seeds. Second and third courses include items like Baby Squid with crispy rice and chutney and Pork Belly Vindaloo with goan red rice. Desserts include Doda Barfi treacle tart with vanilla bean ice cream. Stuffed Kulchas, the trademark dish of the New Delhi restaurant, make an appearance on the New York menu and include traditional stuffings such as Butter Chicken and Saag Paneer as well as Applewood Smoked Bacon and Pastrami with Mustard Butter as a salute to New York. With honors such as a place on the 2015 San Pellegrino 100 Best Restaurants in the World list, we’re eager to see how the concept translates to New York.

A tiny but mighty addition to Chicago’s fine dining scene, the 28-seat Oriole offers an extended format tasting menu from executive chef Noah Sandoval and pastry chef Genie Kwon. At $175 a head (with drink pairings running from $75-$125), it’s an exercise in trust on the guest’s behalf. No menus are shared prior to the meal. We think they’re in good hands, however. Sandoval’s resume includes heading up the kitchen of the (now-closed) Michelin-starred tasting-menu restaurant Senza, and Kwon won a Jean Banchet award (the veritable Oscars of the Chicago food scene) for her work with Boka Restaurant Group’s GT Fish and Oyster. A recent tasting lineup included Osetra Caviar with egg yolk gelato, aquavit and hazelnut; Steelhead Trout with smoked roe, artichokes and marjoram; Rye Capellini with yeast butter, black truffle and tangerine lace; Lamb Belly with pine nuts, pear and sauternes; Gianduja Palette with bananas, lemon and goat yogurt; and Chicory Custard with whiskey, cinnamon and Tahitian vanilla. The reserved space, featuring brick walls, exposed beams and white tablecloths, lets the food do the talking.

Mike Sheerin (Lutèce, Atlas, Jean-Georges, WD-50, Blackbird), a Food & Wine “Best New Chef,” is the latest upscale player to experiment in the fast casual realm. He just opened PACKED: dumplings reimagined with business partner Aaron DiMaria in the city’s tony Hyde Park neighborhood. The light and laid-back 50-seat shop switches up the traditional dumpling paradigm with savory and sweet takes on the classic street food. The “Packed” dumplings rotate monthly and include varieties such as Pastrami. It has pumpernickel, beer-braised onion, pickled green tomatoes and violet mustard. The Butternut is a squash dumpling with sage, lady apples, a curry wrapper and balsamic caramel. A “ladeled” section of the menu features dumpling soups such as the Posole with braised pork shoulder, pasilla peppers and hominy.

Authentic Spanish tapas are the focus of the new restaurant Moruno at the Los Angeles Farmers Market. Executive chef and managing partner Chris Feldmeier and managing partner and g.m. David Rosoff met more than a decade ago while working at the revered Campanile in Los Angeles. The pair worked together again at the Michelin-starred Osteria Mozza before joining forces to develop Moruno. The menu at the casual Moruno is centered around lamb and chicken kebabs, grilled over charcoal and served by the skewer or in 9-inch sandwiches called Submorunos. Alongside are entree options like whole fish a la plancha, or grilled tripe with white beans; as well as starters like a half-rotisserie cabbage with picked mushroom yogurt, or pork belly chicharrones.

Harlem hot spot The Cecil has a new menu, the first that Joseph “JJ” Johnson has created as the restaurant's executive chef. His lineup “represents the flavor profiles of the world’s most influential Afro ports.” Johnson traveled to Ghana, Jerusalem and the Caribbean for ingredients, flavors and inspiration. The result? A complex and multidimensional Afro-Asian-American menu that includes heirloom grains and a new whole-animal grass-fed beef program sourced from an upstate farm. A signature dish, Hands Only, is based on a popular Senegalese street dish, Thiebou Dieune. Johnson’s version is a spicy mix of beans, sticky rice and rabbit sausage, eaten traditionally by scooping it up with grilled roti. Also on the menu is Johnson’s take on Moqueca, an aromatic Brazilian fish stew from the state of Bahia: It has smoked fish, okra, prawns and shrimp and is served over rice; Braised Goat Dumplings are inspired by goat’s prominence in the culinary traditions of many world cultures. Johnson wanted to incorporate the staple into the classic Asian dumpling, which he serves with a piri piri-peanut butter sauce. The flavorful menu is complemented by beverage director Antoine Hodge’s cocktails that are infused with African ingredients and spices. The Eye of Horus cocktail features Senegalese Ginjan Ginger Juice and Monkey Shoulder scotch.

Chicago’s Greektown is getting a fresh addition with Aviva, a more modern, market-driven concept than its conventional neighbors. The name is Hebrew for “springtime,” and the seasonal menu features items from across the Mediterranean (Spain, Italy, France, Greece, North Africa and the Middle East). The menu is the work of consulting chef Alan Lake, who has worked as a hired gun for dozens of restaurants including Pensiero in Chicago and Etre in Palm Beach, FL. Offerings include Avocado Bombe stuffed with crab, shrimp, scallops, tarragon and lemon zest; and Pan-fried Branzino with Israeli couscous, saffron tomato broth and herb salad. The clean midcentury space subtly pulls in design elements from Greece, Italy and Morocco.

“Lavish”  and “decadent” are words that come to mind at the opulent 75-seat bar—inspired by Marie Antoinette’s bedroom chamber—in Brooklyn Heights. Tarek Debira and Patricia Ageheim, the husband and wife duo behind the beloved neighborhood French restaurant Chez Moi, along with partner Ali Mardassi, opened a space below the restaurant that evokes the Queen of France’s private room in Le Chateau de Versailles. Beverage director Franky Marshall, formerly of Manhattan’s Monkey Bar and The Dead Rabbit, has created a menu of cocktails named as an homage to Antoinette. The interior of the space takes its cue from the Rococo architectural and design movements of 18th century France. Drinks include the French 75. Our favorite feature: A replication of a bookshelf from Marie Antoinette’s library serves as a hidden entrance from the restaurant to the underground bar. 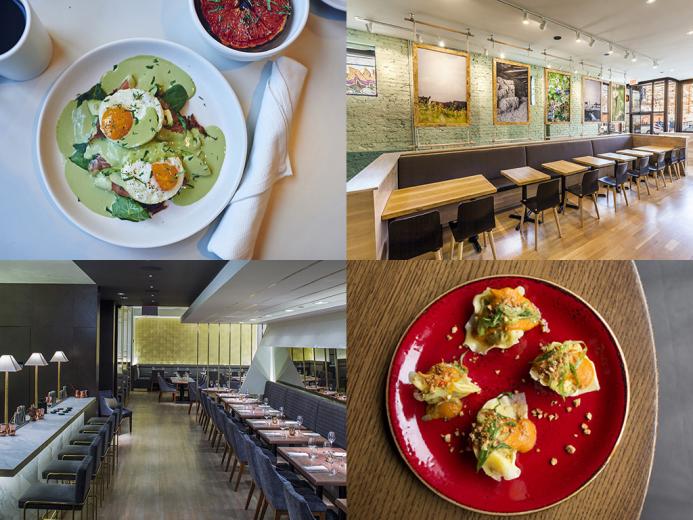