Anyone who watched the first season of Bravo’s Top Chef witnessed the emergence of an extraordinary chef named Tiffani Faison. Though she finished second, Faison proved she could go toe-to-toe with any of the bad-boy chefs. It’s no surprise. She’s toiled in the kitchens of several great chefs, including Daniel Boulud, Alain Ducasse, Todd English and Tony Maws.

It also came as no surprise that her first restaurant, Sweet Cheeks, a barbecue joint in her native Boston, was a home run in the city’s Fenway neighborhood. In fact, Boston magazine declared her barbecue the city’s best. As you can imagine, Faison’s fans have eagerly anticipated the opening of her second eatery, this time a Southeast Asian concept called Tiger Mama. It recently opened just down the street from Sweet Cheeks and, again, did not disappoint.

The name Tiger Mama not only tips its hat to the restaurant’s Asian roots, but also references its fierce owner. Why Asian? Because Faison and her wife/business partner, Kelly Walsh, love Southeast Asian food. It’s just that simple.

“To us, Southeast Asian food is the best food in the world,” says Faison, who was captivated by Thai food during travels to Bangkok and surrounding islands. “When it’s done well, it’s what we crave. We’re excited to bring our interpretation of it to life.”

In the case of Tiger Mama, Faison’s menu wanders through Thailand, Vietnam and Malaysia. She’s not recreating traditional dishes, but rather respectfully interpreting them. Her chef de cuisine is Mike Stark, formerly of Boston’s Coppa and Toro. Charles Coykendall oversees the bar program.

She describes Tiger Mama’s vibe as vibrant and urban tropical. Its seats 135 and is divided into several areas, including a front bar, a dining room and a tiki bar. Here’s a look around.

Before her barbecue and Asian restaurants, Faison won a three-star review from The Boston Globe for her work at Rocca Kitchen & Bar.

The decor at Tiger Mama is stunning. Check out the wall on the left where herbs are grown for the kitchen.

The tiki bar: Who wouldn’t want to pull up a stool here?

To wash it all down? An assortment of tiki drinks. 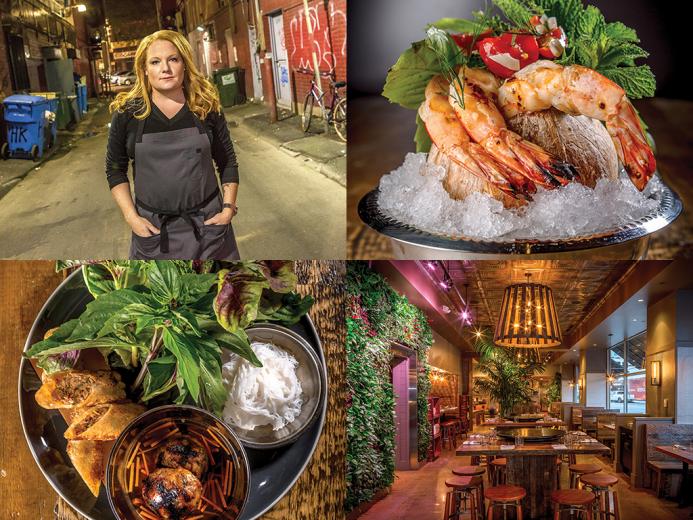