Flora Street Café, the 21st restaurant from Stephan Pyles, opened recently in the Dallas arts district. In a way, it’s a return to roots for the iconic chef, who pioneered the notion of more elevated Texas cuisine at Routh Street Café three decades ago.

“I feel like I have come full circle,” Pyles says. “The first restaurant I opened in the 1980s, when I was a mere child, was Routh Street Café, which was sort of elevated, a bit glamorous with a more formal setting…a very small restaurant. And that’s where Southwestern cuisine was, if not invented, certainly developed in a certain manner. It was ground zero for that.”

Over the last three decades Pyles has seen dramatic shifts in the American dining landscape.

“Now I’m witnessing the casualization of American dining,” he said. “So I thought it was time for Dallas to have an adult restaurant. I wanted to buck the trend and be a little bit more formal, more stylistic. To return to my roots in fine dining at a more elegant level.”

Because of the arts district locale, Pyles has designed a menu and setting that presents food as theater. The exhibition kitchen is not only open but allows for direct interaction between guest and cooks.

The décor at Flora Street is sleek and contemporary, with 25-foot silk tapestry as a focal point, designed by artist Tim Harding to evoke stage curtains. Lighting includes an installation of “ghost chandeliers” that recreate classic chandeliers from famous opera houses around the world.

Dishes are complex and presented with sophistication. There’s a version of a Caesar salad made with living lettuces that have been buried in embers until they’re warm but still crunchy in the middle, served with white sardines and boquerones with a serrano chile tuile and a gazpacho soda.

Pyles took special care to make sure acoustics in the restaurant allow guests to hear each other speak, as well as hear the music, which is a mix of classical and 1980s rock, to harken back to Routh Street’s heyday.

“It’s REO Speedwagon and Mozart. It works well together. But the thing is you can hear it,” he says. “My clientele is 35 and above, maybe 40 and above. It’s definitely the arts crowd and the people in Dallas who don’t want necessarily a scene. They want fine dining in a more elegant setting.”

Flora Street replaces the restaurant Stephan Pyles, which closed recently after more than 10 years at another location in the arts district. The lease was up and Pyles says he was eager to begin again.

“It’s like dog years. For a restaurant, 10 years is like 30 years in a house. The kitchen was being held together by Band-Aids,” he observes. “We needed to start afresh.”

The exhibition kitchen allows for direct interaction between guest and cooks.

Art on the plate
Kevin Marple

Art at the bar
James Wilson

Above the bar is a Shy Light—part performance art, part sculpture—made of silk that is illuminated and unfolds and retreats in 10-minute cycles like a blooming flower.

From the sea
Kevin Marple

The décor is sleek and contemporary. Lighting includes an installation of “ghost chandeliers” that recreate classic chandeliers from famous opera houses around the world.

The 76-seat property was designed with the arts district clientele in mind.

Stephan Pyles operates Stampede 66 in Dallas, which has a location scheduled to open this summer at Dallas-Ft. Worth Airport. The chef also has two licensed airport locations of Sky Canyon by Stephan Pyles, as well as the Sustenio Restaurant at the Eilan Hotel in San Antonio. 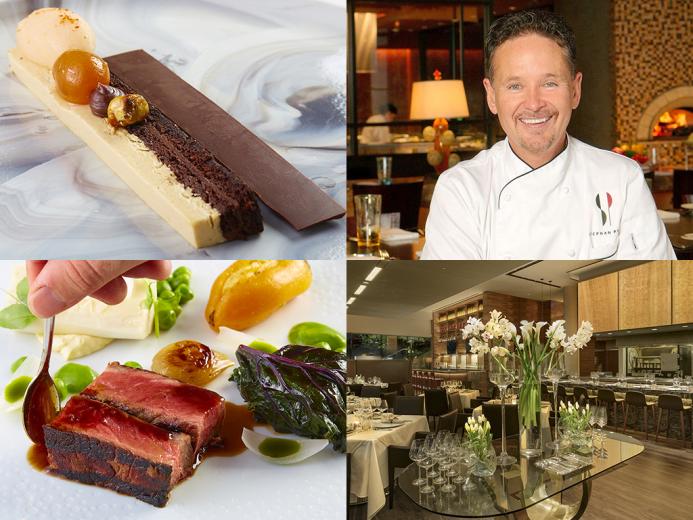