In a “quiet opening,” Public Display of Affection (PDA) debuted between Gowanus and Park Slope, with a pizza-centric menu from Chef Robert Guimond, an alum of Jean Georges, Roberta’s and Speedy Romeo. Guimond is helming PDA with his sister Emi Guimond, an alum of Tom Colicchio’s Craft and former director of operations at Speedy Romeo. The building has been many restaurants throughout the years, including a seafood restaurant, taco place and pizzeria.

At PDA, pizzas start with a slow fermented sourdough that blisters to a thin crust and becomes pies like a classic pepperoni with red sauce, mozzarella and chili flake; white pizza with house ricotta, mozzarella, pecorino, parmesan and garlic; and vegan pizza with white sauce, garlic, shiitake, broccoli, brussels and lemon.

Chef Robert French is doing a lot with seasonal veggies at PDA, running parallel with the pizzas and appearing on top. The “vegetables, starters and salad” section of the menu includes such complexity as shishitos with tarragon, umami and lemon; the PDA Salad with shiitake, gorgonzola, red onion, pumpkin seed and garlic; and wood-fired carrots l’orange with citrus and butter.

This cheesy bread is destined to go with PDA’s beverage selection that includes classics like the Old Fashioned, a new take on the Paloma, and trendy drink ingredients like gin and purple peaflower.

The 28-seat restaurant features a 20-seat patio with a small (4-seat) bar amidst indoor plants and an open kitchen, vintage bronze fixtures and big windows opening onto the patio.

Just-opened Briny Swine Smokehouse & Oyster Bar is a 1,200 square-foot space with a minimalist-coastal look and an occasional soundtrack of live bluegrass music. The “briny” and the “swine” refer to the cuisine, an ode to two Southern celebrations: oyster roasts and pig pickings. The menu reflects that through artful oysters and barbecued pork dishes, along with some cool Southern favorites like fried green tomatoes with a blue crab remoulade, Buffalo blue cheese rinds (with Clemon Blue Cheese!) and fried catfish with jalapeno tartar sauce.

Briny Swine debuts under the ownership of Executive Chef/Owner Brandon Rushing, Co-owner Katherine Rushing and Pitmaster Will Kalutz. The owners are known in the area for Ella & Ollie’s, a seafood-focused spot also on Edisto Island. “We wanted to do a casual meat and seafood option on Edisto for a long time now,” said Brandon Rushing. “Our diners at Ella & Ollie’s wanted more options are we are so excited to be able to meet that demand just in time for summer.”

The story of Kush, which opened June 17, is a rebirth of sorts. Owner/Operator Matthew Kuscher (the “Kush” in Kush Hospitality) closed his sea-centric restaurant Spillover due to the pandemic and used the time to revamp and reinvent the restaurant into Kush. “Spillover had an amazing run and certainly had its fans,” Kuscher said. “But looking at how the market is changing and what customers want in these crazy, stressful times it was evident to me that the spirit of Kush — fun, casual, not taking itself seriously — was what we needed now.”

The 1972 cocktail at Kush is part of a creative cocktail menu that also includes the Peanut Butter Old Fashioned served in a Smucker’s jar and Purple Drank (gin and crème de violette), served in a drink pouch.

Maybe this guy could tell us the future of the restaurant industry?

Impasta is a ghost kitchen that creates zero- to low-carb pasta and pizzas with a digital-media expert at the helm. This delivery-only restaurant is a virtual brand for now (available through Postmates, ChowNow, UberEats, DoorDash, GrubHub and Caviar), but there are plans to expand to brick-and-mortar locations in the future, and potentially build out kitchen or window pick-up locations depending on the long-lasting effects of the pandemic.

Spaghetti Squashed It at Impasta

Impasta Founder Harrison Litvack, a native Angelino, said he finds satisfaction in a mission-oriented business concept based on the customer’s standpoint. “In order to reach our customer base, I knew Impasta had to be 100% genuine, from the guilt-free-yet-tasty pasta comfort dishes (like Spaghetti Squashed It, pictured here) to the carbon-neutral packaging,” he said.

Pizzas have cauliflower crusts to cut carbs, and the whole menu accommodates vegan, vegetarian, pescatarian, keto and Whole 30 diet preferences. Pizzas can be topped with real burrata or substitute a vegan cheese. Pasta dishes lean on cauliflower as well to keep the comfort but lose the carbs.

Australian power chef couple Monty and Jaci Koludrovic, with Botanical Hospitality Group, opened Strings of Life (S.O.L.) on Melrose Avenue in mid-June. It’s a community-focused, Cali-Aussie showcase of elevated eats, outdoor space and coffee culture open daily from 7 a.m. to 4 p.m. “We have gone to great lengths to design S.O.L. to be beautiful and functional — much like you would a large-format restaurant — and the plating and flavors will showcase that,” said Co-owner Grant Smillie.

Executive Chef Monty Koludrovic is blending California and Australian cuisines into intriguing mashups like vegemite and caviar. Playful dishes include “everything bagel” crispy potato cake with smoked salmon and cream cheese; a cheese and vegemite croissant; and a basil fowlty with basil-steamed chicken, sweet potato, pickled onion, arugula and aioli.

For safety, seating is at 60% capacity, capped at 36 seats (24 outdoor and 12 indoor) for the foreseeable future, but there’s always the takeout window, making it even easier to keep a distance while grabbing a coffee. 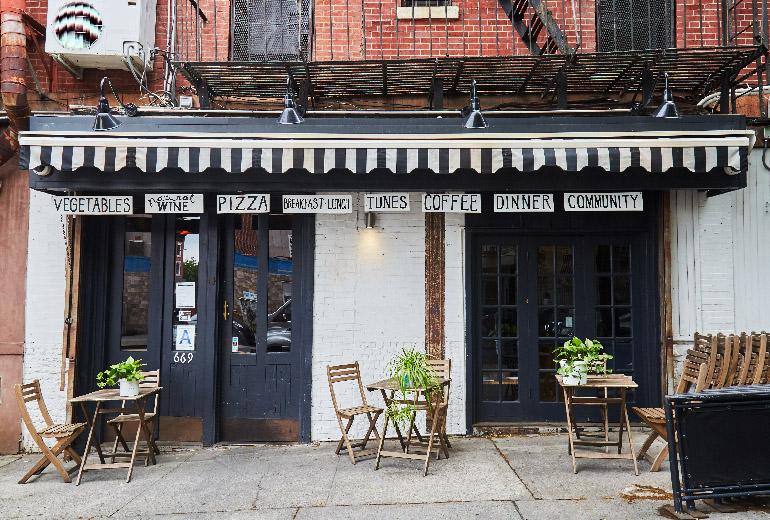