To leap from Bombay to Los Angeles doesn’t seem an easy transition for a restaurant operator, but Rohan Talwar has done it with the recent opening of Norah.

Talwar’s IB Hospitality opened the restaurant Ellipsis in Bombay in 2012. But Talwar found himself returning to L.A. and decided it was home.

His new restaurant Norah, which is in West Hollywood, focuses on seasonal local ingredients in a Thomas Schoos-designed spot filled with light. The restaurant’s chef Mike Williams, formerly of The Tasting Kitchen in Venice, CA, designed a menu around the wood-fire grill.

The cocktail program was developed by Australian Hamish McShane, previously of Syndey’s Bayswater Brasserie and Salon Blanc. The wine list is by John Snowden, also Norah’s g.m., who was previously with Eveleigh and Goldie’s.

Thomas Schoos designed the restaurant and describes it as “a study in California indoor/outdoor living,” with live trees inside and white oak flooring. The restaurant has a private garden out back. Glass doors and skylights allow for light during the day. At night, the restaurant is made cozy with soft lighting and an open fireplace.

Like the dinner menu, Norah’s cocktail program is based on what’s in season, along with house-made cordials and syrups. In winter, Southern California is awash in citrus, so the menu includes cocktails like the Mandarin with gin, fresh mandarin, cardamom and lemon; or the Blood Orange with Irish whiskey, yellow chartreuse, blood orange juice and vanilla.

Chef Mike Williams divides the menu into First, Second and Third. A First might include cast-iron cornbread with rosemary-honey butter; or oysters of the day with green apple and scallion kimchi. 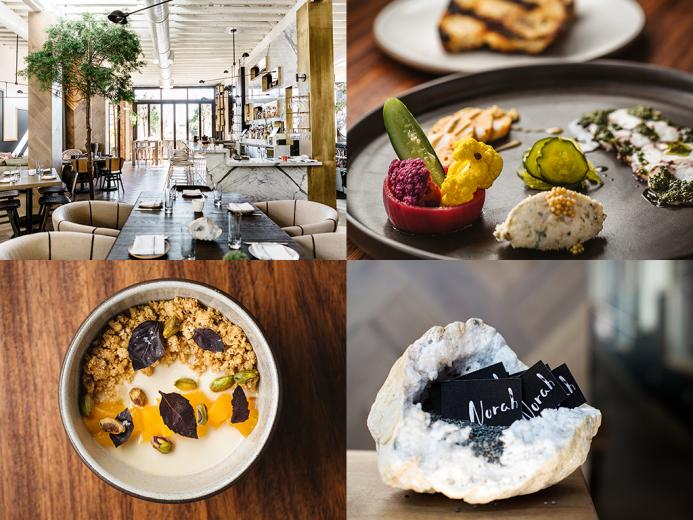