The new Ironwood recently debuted in Laguna Hills, CA, with a dinnerhouse menu that plays on wine country regions around the world.

The 120-seat restaurant is the first ground-up concept by Russ Bendel, who also bought and took over operation of Vine Restaurant & Bar in San Clemente, CA, in 2013.

Bendel is the son of a longtime restaurant-industry veteran with the same name, who is now chief executive of Habit Restaurants, parent to the Habit Burger Grill chain. The senior Bendel is also an investor in Ironwood.

Now Bendel says he's hoping to make his own mark with a restaurant group of uniquely designed concepts tied by a wine-country theme.

The menu at Ironwood was designed by chef and partner Jared Cook, who also helms the kitchen at Vine.

Bendel describes the food as New American variations of dishes from wine-rich regions, like the signature Jidori chicken schnitzel and pan-roasted Greek seabass.

Here's a look at the new Ironwood.

Behind the bar
Kevin Gosslin

Gabe Whorley, a partner in the restaurant, has created a bar menu with 25 wines by the glass and 50 by the bottle. Four craft beers are on draft, and six are available in bottles, including local Orange County brews. The cocktail selections rotate seasonally and make good use of herbs grown at sister restaurant Vine.

The patio seats 40 and the restaurant is open only for dinner. The patio has trellised lights, six heaters and four retractable awnings.

Cocktails, wines by the glass and bottle
Kevin Gosslin

The cocktail program, developed by Gabe Whorley, a partner in both Ironwood and Vine, features fresh herb and floral garnishes organically grown in a large garden behind the restaurant Vine. The wine list includes more than 50 bottles from around the world with 25 by the glass. Craft beers are available on draft and in bottle, including local Orange County brewers.

Russ Bendel says he's hoping to make his own mark with a restaurant group of uniquely designed concepts tied by a wine-country theme. 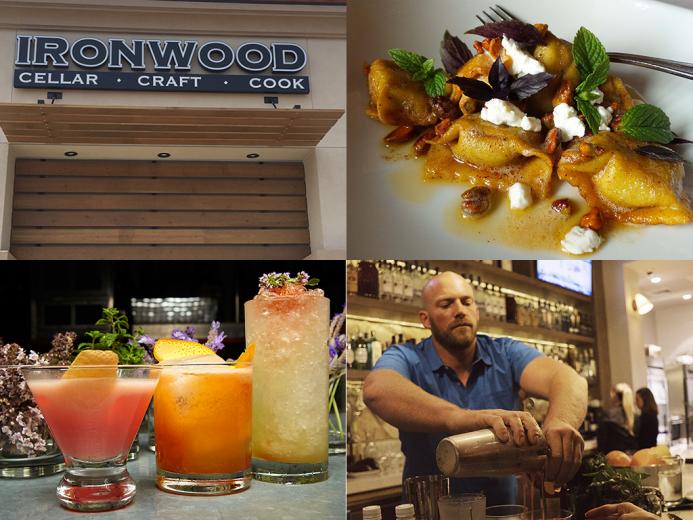