Opening at the end of February on Denver’s up-and-coming corridor, Platte Street, Room for Milly is a bar and lounge draped in velvet and quirky accessories. Fiona Arnold and Jeffrey Knott (the team behind Blue Sparrow and Queens Eleven) focus on the cocktail bar in this luxe space, designed to evoke “the infamous Milly Parker’s love for travel, cocktails and conversation,” the owners said.

Décor at Room for Milly

The art and design — from cool commission pieces to funky thrifted finds — at Room for Milly is entirely curated by female designers, featuring female artists.

Bar at Room for Milly

Guests are encouraged to be barstool tourists with travel-inspired cocktails, including The Hotel Le Bristol with Calvados, Manzanilla sherry, fuji apple, phosphate and seltzer and the Bora Bora with coconut-washed rum, spiced pandan cordial and tiki bitters.

Think Hospitality’s new outdoor Mediterranean restaurant is located in the jungle-like courtyard of the Boulan South Beach hotel. Jet setters and locals are the target audience for this concept, “that highlights the best the beach has to offer,” said Shawn Vardi, CEO of Think Hospitality. “Residents and tourists alike can enjoy upscale dining while embracing their wild side.” Things get wild at 9 p.m., when The Garden transforms into mysterious twilight hideaway with the over-water stage featuring live music and performance art.

Menu at The Garden

Since the early 2000s, Chef Kyungmin “Kay” Hyun, has made her mark at Nobu Matsuhisa’s Mai House, Jean-George Vongerichten’s Jean-George, ABC Kitchen, Stephen Starr’s Buddakan and more. Now, her Korean roots and love of Spanish flavor profiles have converged in her second restaurant, Mokyo, on one of the East Village’s most iconic streets: Saint Marks Place. (Her debut restaurant, Thursday Kitchen, opened in 2016.)

Mokyo (the name is a playful way of saying Thursday in Korean) is a cozy nook in the East Village offering Asian-inspired tapas that blends flavors from Seoul to Spain and South America, through the lens of New York. Menu highlights include corn dumplings, ceviche, gumbo with Korean chili peppers, chicken with sesame yogurt, noodles with basil and pop rocks (pictured), which is mascarpone ice cream with berries and ivoire crumbs.

Chef Brad Wise’s travels and his Jersey roots inspire a menu of antipasti, pizzas, pastas, insalatas and piatti arrostito (roasted dishes). The experience is fashioned after a neighborhood eatery with shared plates, coffee and cocktails. The attached café and bakery is helmed by Executive Pastry Chef Jeremy Harville.

This agricultural-dining-bourbon sippin’ hybrid is found inside a barn at a historic Kentucky horse farm. “Barn8 will be one of the most unique farm-to-table experiences in America today,” said co-owner Steve Wilson, who along with his wife and business partner Laura Lee Brown, has a vision of agri-tourism and a passion for preserving rural heritage. The entrance to the barn is lined with 100 bourbon barrels and a stairway leads up to the second-floor Hayloft, a private dining space for up to 200. There’s also a three-tiered indoor greenhouse.

The cocktail program utilizes ingredients from surrounding farms, along with an extensive list of rare whiskeys and aged bourbons from Barn8’s small batch program. Guests can also purchase full bottles of whiskey in the Bourbon Library.

The main dining area, which seats 110, features long communal farm tables at the center and individual dining areas adapted from the barn’s original horse stalls and an open kitchen with a chef’s bar. The menu is firmly farm-to-table, highlighting each season’s harvest.

Isso means “much more” and “ocean,” and this contemporary Japanese kappo-style restaurant is offering small plates and an eclectic tasting menu from veterans of Neta, Le Bernardin and Torishin.

Chef Michael Jong Lim’s menu is built for sharing, with seasonally focused composed plates, yakitori (yakitori chicken is pictured), tempura, noodles and chirashi, both a la carte and as a chef’s tasting for dinner, paired with wine, sake and Japanese whiskey highballs on tap. 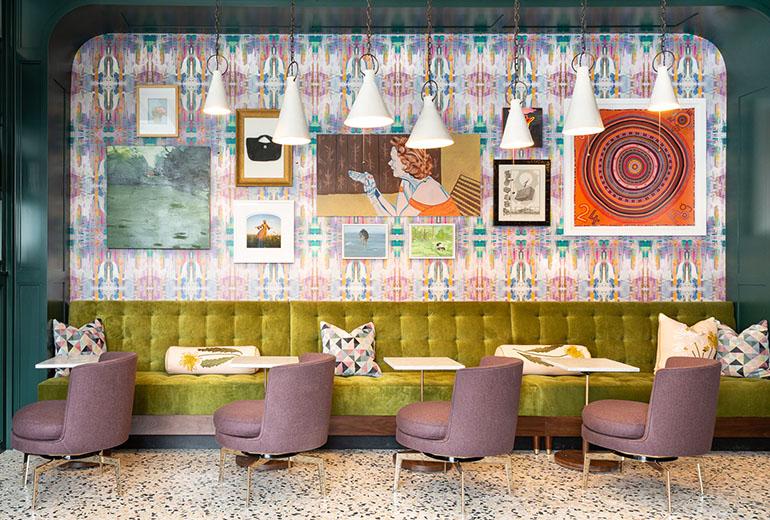