This St. Louis spot is cooking an assortment of finger foods for its Filipino Football Platter, which includes fried lumpia, a type of spring roll, and langonisa corndogs made with spicy pork and garlic sausage in a cornmeal batter crust. The Super Bowl trays are available in different sizes for order until Feb. 2.

The Denver-based fast-casual chain will offer free delivery on Postmates to customers who use the promo code “chipotlebowl” throughout Super Bowl weekend, from Feb. 2 to 4. Chipotle is also holding a Big Game Catering Sweepstakes with Tabasco Sauce. Contestants can enter to win prizes, which include free catering options for up to 20 people with a gallon of Tabasco Sauce, through Feb. 3. In addition to the sweepstakes, customers who order catering from Chipotle by Feb. 3 will receive mini Tabasco Sauce bottles with their meal.

The Mockingbird
Emily B. Hall

Some Philadelphia locations of this Golden, Colo.-based fast-casual chain have decided to temporarily change their name to “Philly” Market, showing support for the Eagles and their fans in the Philadelphia area and distancing themselves from the New England Patriots.

Wing Zone, headquartered in Atlanta, will give customers who pre-order a Super Bowl spread by Feb. 1 a certificate for 10 free boneless wings.

The Boston doughnut shop is selling a Super Bowl six-pack that includes flavors like Buffalo Pizza, Chocolate Stout & Pretzel and Chip & Dip, as well as a “Go Pats” decorated treat in honor of the New England Patriots.

On Super Bowl Sunday, the Cincinnati-based restaurant will gift customers who place a carryout order an insulated “MVB” (Most Valuable Bag) to keep their food hot. They will also receive a coupon for $5 off their next purchase.

Instead of serving traditional chicken wings for game day, this Austin, Texas, eatery will dish out hog wings, pork shanks tossed in tamarind BBQ sauce and paired with a side of daikon slaw.

Krystal customers watching the Super Bowl can pick up 10 sliders and 10 wings for $10, 40 Chik Nuggets for an additional $10, or a party pack of 24 sliders at the Dunwoody, Ga.-based chain.

This New York City taqueria is offering a party-sized Super Dip for 10 people exclusively on Caviar. The Super Bowl special is made with seven layers of beans, rice, a choice of taco filling, red and green salsas, serrano cream, cilantro, onions and guacamole, and comes with bags of housemade chips on the side.

At this Irving, Texas-based chain, customers who purchase catering or to-go orders of $100 or more and use the promo code FOOTBALL20 will receive a 20-percent discount through Feb. 4.

For the Super Bowl, El Pollo Loco, based in Costa Mesa, Calif., will take $5 off 12-piece family meals, $10 off 24-piece catering meals, and $20 off 48-piece catering meals. Also, members of its loyalty rewards program will get double the points on all purchases made on Feb. 4.

The Philadelphia restaurant will offer beer discounts and all-day happy hour appetizers, like $6 nachos, on Super Bowl Sunday. Landmark Americana will also discount take-out wing orders: 25 for $20, 50 for $40 and 100 for $75.

On game day, P.J. Whelihan’s, based in Westmont, N.J., will offer Super Bowl fans a deal on wings: 52 for $52, dine-in or take-out. The restaurant will also serve complimentary small bites and sips to customers waiting for take-out.

The Portland, Ore., restaurant plans to appeal to non-football fans with an all-night happy hour on Feb. 4. Those who want to dine out on Super Bowl Sunday but not watch the game can enjoy no television, $10 craft cocktails, $7.50 wine pours and food specials.

This convenience-store chain based in Irving, Texas, will compete with restaurants on game day with its Super Bowl offers: $5.55 large pizza, 10 chicken wings for $7.49, 10 boneless wings and dip for $5, a large pizza and five wings for $9.49, and a 5 for $4 Grill Value Menu.

In honor of the Big Game, this Cedarhurst, N.Y., restaurant has created a $1,000 pastrami sandwich — the King Doma — created with over a dozen components like Indonesian luwak coffee, 28-day dry-aged prime beef short ribs, pan-roasted foie gras, Italian white truffles, crystal-infused French mustard and gold leaves. The decadent meal will be paired with a glass of Cristal champagne.

The Oak Brook, Ill.-based quick-service chain will have two promotional offers on its mobile app on Feb. 4. Users can get a free 10-piece McNuggets with the purchase of a 20-piece McNuggets or $1 off a 6-piece Buttermilk Crispy Tenders.

Starting Feb. 2, the Philadelphia pub will show pride for the Eagles with its “4th and 26” cocktail — a green concoction of beer, lemon-lime soda and Curaçao liqueur — and two specialty pizzas: cheesesteak and roast pork.

Mrs. Fields, based in Broomfield, Colo., is selling a football-themed cookie cake in stores and online.

The Dallas spot will offer a catering promotion on Feb. 4: orders over $100 will come with a free large Hummus with Veggies.

The Atlanta-based casual-dining chain has a few promotions in store for the Big Game: a free chocolate mousse cake with a party pack when pre-ordered by Feb. 2, $10 off online to-go orders of $52 or more when pre-ordered through Feb. 4, and $5 off in-store purchases of $25 or more on Feb. 4.

Jack in the Box, headquartered in San Diego, aims to create social media buzz for its new Asian Fried Chicken Sandwich by creating a feud between the brand’s mascot Jack Box and Martha Stewart, as seen in a commercial that will broadcast during the Super Bowl. The quick-service chain will encourage the use of the hashtag #JackVsMartha in the weeks following the Super Bowl game.

Stirr in Dallas will offer three different experiences on game day at its rooftop, main dining room and private room. At the rooftop, the game will be shown with drink specials and shareable platters. In the main dining room, a DJ will spin from 3-9 p.m., while the game plays on all televisions. There will also be $7 frosé and beer bucket specials — $17 for domestic beers and $22 for imported beers. The private room will be a VIP experience, priced at $65 per ticket, that will include a drink package and an all-you-can-eat spread.

The Canton, Mass.-based frozen-treat chain is getting in on the Super Bowl fun with a football-shaped ice cream cake, which can be customized by flavor and team.

Ayara Luk, a Thai eatery in Los Angeles, will host a game day viewing party on Feb. 4, starting at 3 p.m. Tickets are $60 in advance, $75 at the door and free for children under 5. The event will include bottomless Singha beer and soft drinks; an all-you-can-eat menu featuring bites like chicken satay flatbread, spicy Thai lobster rolls and Pad Thai nachos; and games and raffles with chances to win gift certificates, gift baskets and swag.

Headquartered in Charlotte, N.C., Bojangles’ will run a one-day special on Feb. 4. The Big Bo Box, featuring eight pieces of chicken and four buttermilk biscuits, will be sold for $8.99.

The Brooklyn, N.Y., barbecue joint will throw a Super Bowl bash, ticketed at $50 per person, with an all-you-can-eat pulled pork and wing buffet, two drink tickets and a Super Bowl square, a grid used to bet on the game.

On Feb. 4, the Cypress, Calif.-based Tex-Mex restaurant will offer Super Bowl Party Pack options, such as $20 guacamole and chips, $20 Buffalo wings, $20 sliders, and $10 chips and salsa. When guests purchase three $20 trays, they will receive free chips and salsa. El Torito will also set up a taco bar available to 10 people minimum at $16 per person.

The Sunnyvale and San Jose locations of Starbird in California will offer a free $10 gift card to those who order a 25-piece or 50-piece chicken tender platter for pick-up or delivery via Uber Eats by Super Bowl Sunday.

Based in Plano, Texas, this quick-service chain has a new Super Bowl ad featuring former Eagles player Terrell Owens. The short commercial promotes the lower point redemption level for its Hut Rewards loyalty program and will officially air on Feb. 4 during the Super Bowl.

Pizza Hut has also collaborated with Yahoo Sports to offer football fans an opportunity to win free pizza for a year via Squares Pick’em, an online and mobile game that allows players to pick squares that correspond with scores for each quarter of the Big Game. If a contestant’s square matches the score at the end of the quarter of the Super Bowl, then he or she will be entered for a chance to score.

Another special treat for the Super Bowl at Cardigan Donuts is the Shoofly Whoopie Pie, right, a Philadelphia-inspired pastry which consists of a split chocolate cake doughnut filled with molasses buttercream and decorated with chocolate icing and streusel topping. Its counterpart is the New England-themed Fluffernutter Bismark, left, featuring peanut butter custard, marshmallow crème and flame-scorched banana brûlée.

On Feb. 1, Jersey Mike’s, headquartered in Manasquan, N.J., is sending its email club members a $5 off coupon for a catering box order for football fans to use for their game day spread.

The Dallas barbecue spot is now taking orders on its party packages, with the price ranging from $135 to $300, for the Super Bowl weekend. Each option will include housemade BBQ sauces, pickles and sliced bread.

Customers who order a Gourmet Burger Bar from this Greenwood, Colo.-based casual-dining chain from Feb. 2-4 will receive a free $10 gift card. The Super Bowl party option comes with 10 or more burgers with a variety of patty options, fresh toppings, sides and condiments. Red Robin will also offer a 20-percent discount on all to-go orders from Feb. 2-4.

The Venice Beach, Calif., dining destination will celebrate on Sunday by televising the big game on its multiple flat screens and serving food specials, like fried chicken and waffle sliders, and drink discounts, like $4 mimosas.

Through Feb. 4, the Richardson, Texas-based café brand will cut $5.20 off the purchase of any party platter.

Based in Dallas, the casual-dining chain will host a Super Bowl Watch Party with off-the-menu shareable items, like the Hunter’s Meat & Cheese Board. Those who reserve a table will be entered in a drawing for prizes.

On Super Bowl Sunday, the San Diego spot and its adjoining patio, Moonshine Beach, will celebrate and watch the game with food and drink specials, prizes and giveaways every quarter.

Based in Beverly Hills, Calif., Buffalo’s Cafe will take off 10 percent off wing platter orders placed by Feb. 2. 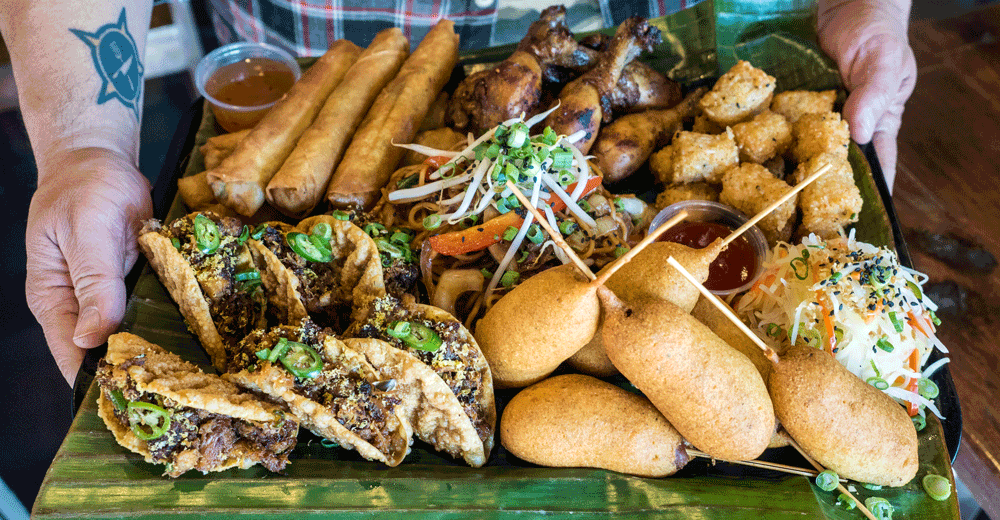