ADVERTISEMENT
“May the Fourth Be with You” Cookie Cake
Mrs. Fields

For “Star Wars” fans looking for a sweet treat on May 4, Mrs. Fields offers a decorated cookie cake for the occasion. Mrs. Fields is based in Broomfield, Colo., and has more than 200 units.

Denny’s partnered with Lucasfilm to release “Star Wars”-inspired food and drinks, as well as exclusive “Solo: A Star Wars Story” trading cards and collector cups ahead of the latest movie’s release on May 25. This burger is on the special menu. It features a beef patty, chipotle gouda cheese, bacon and spicy ghost-pepper sauce. The family-dining operator based in Spartanburg, S.C., has more than 1,700 locations in the U.S. and worldwide.

This themed breakfast item from Denny’s is topped with fresh strawberries, strawberry sauce and whipped cream, and is served with a side of Crystal Crunch Rocks and a pitcher of warm citrus sauce.

Denny’s customers can also opt for a side of Crystal Crunch Rocks for their milkshake.

This egg-white breakfast platter is the “Star Wars” version of Denny’s Fit Slam, a more healthful version of its Grand Slam.

Denny’s is giving its skillet breakfast an outer-space makeover by topping it with two eggs and gouda sauce.

“Star Wars”-themed treats are not limited to menus in large restaurant chains. Independent operators are also finding inspiration from the movie franchise for an array of drinks and bites. Datz in Tampa, Fla., has a special menu for fans of the epic space opera during the month of May. This cocktail, whose moniker plays on its namesake’s unique style of speech, is crafted with mezcal, coconut-based liqueur, matcha, spicy honey syrup, lime and orange blossom waters, and two jalapeño peppers as a garnish.

The Dark Side
Datz Restaurant Group

Datz is also serving food that “Star Wars” fans can enjoy, like this Darth-Vader-inspired dish made with jumbo tater tots covered in activated charcoal (also known as coconut ash) and served with a side of housemade “mayochup.”

“Star Wars” character Jabba the Hutt gets reimagined as an appetizer for this menu item from Datz — chickpea and hemp-seed hummus with vegetables and chips.

Another sweet treat from Dough are these blue and red cupcakes decorated with glow-in-the-dark frosting. 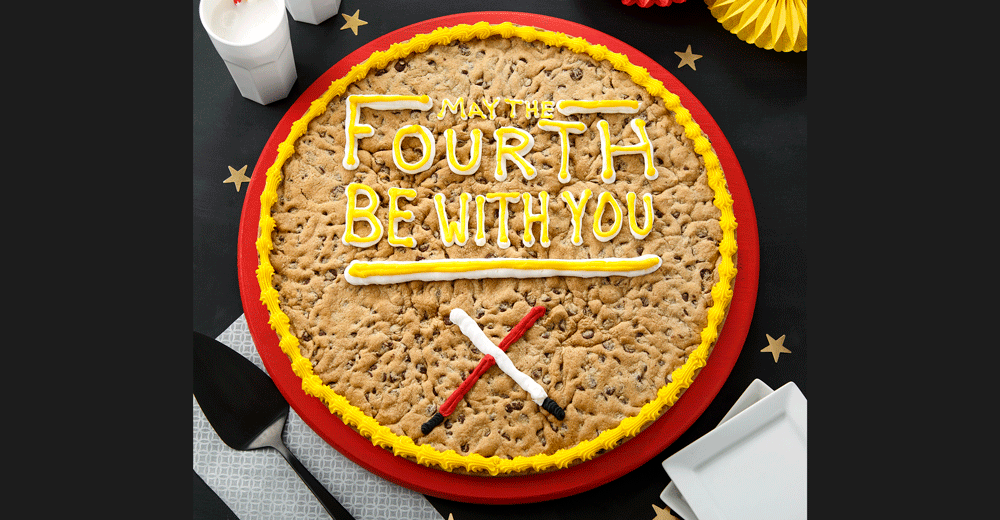