For her version of this Turkish dumpling dish, Cassie Piuma, chef of Sarma in Boston, makes a filling of ground Australian lamb, Aleppo pepper, ground onions with some of the juice drained out, garlic, parsley, Turkish red pepper paste, the Middle Eastern spice Baharat, salt, and black pepper.

Separately, she rubs lamb shoulder with the garlic paste toum and Turkish red pepper paste, along with a spice mix of Szechuan peppercorns, black pepper, Urfa biber pepper, fennel, cumin, a little allspice, and salt. She roasts that low and slow over a pan with a little white wine and white wine vinegar until it’s very tender, cools it and then slices it into bite-sized pieces.

She makes creamed corn cooked with onions, Fresno chiles, ginger, and garlic, plus some Szechuan peppercorns, and a little bit of saffron, turmeric, and allspice. That’s all simmered in cream and water and then finished with yogurt, honey and salt. A little more than half of it is puréed and passed through a fine chinois and then added back to the rest.

She stuffs the lamb filling between pasta squares, ravioli-style, boils the dumplings and then adds them to a pan with a sauce of tomatoes and butter.

The lamb shoulder is reheated in oil with red onion, sweet pepper, and shishito pepper until the meat is crispy, and then she finishes it with more of the Szechuan pepper mix.

She plates the manti over the creamed corn, tops it with the crispy lamb shoulder and garnishes it with parsley, mint, and dill.

Nestum is a popular cereal in Malaysia and Singapore, but Mark Yu, chef of 53 in New York City, had trouble finding it in Manhattan and ended up importing it from Malaysia for this dish, for which he dusts shrimp in a mixture of cornstarch and tapioca flour and lightly fries it.

In a wok he melts butter, adds Thai chiles and curry leaves, heats it and then adds Nestum, tossing it until it’s golden brown. He adds the shrimp, tosses it together and serves it with rice.

The Brennan family makes use of their connections with Crystal Hot Sauce — Pepper Baumer, president of Baumer Foods, which owns Crystal, is a cousin — for this cocktail at Brennan’s of Houston.

“They used to throw [the pulp] out until they started selling it to our family restaurants to use in dishes, specifically fried chicken like they used at Picnic (a casual restaurant my Aunt Ti [Martin] owns in New Orleans),” Brennan’s of Houston proprietor Lexie Brennan-Martin said in an email.

The cocktail also includes 2 ounces of Lalo Blanco Tequila, ¾ ounce of Ancho Reyes Original chile liqueur, and 6 dashes of jalapeño pepper tincture. That’s shaken with the Crystal pulp and strained over ice into a rocks glass rimmed with Creole seasoning.

For this dish at Divya’s Kitchen in New York City’s East Village, chef-owner Divya Alter cuts paneer cheese into sticks, wraps them in nori seaweed, dips them in a light gluten-free batter and pan-fries them. She serves them with her sweet-and-smoky sauce made with raisins, cranberries, and cardamom. The recipe appears in her new book, Joy of Balance: An Ayurvedic Guide to Cooking with Healing Ingredients: 80 Plant-based Recipes

Spanish Octopus with avocado and almonds

At LouLou in Santa Monica, Calif., executive chef Stanley Suchy blanches Spanish octopus, cools it and then simmers it with bay leaves, allspice and black peppercorns. Then he marks it on a char grill and serves it over a romesco sauce with smoked Marcona almonds. To bring a bit of California to the dish, he accompanies the octopus with avocado and toasted California almond chips. 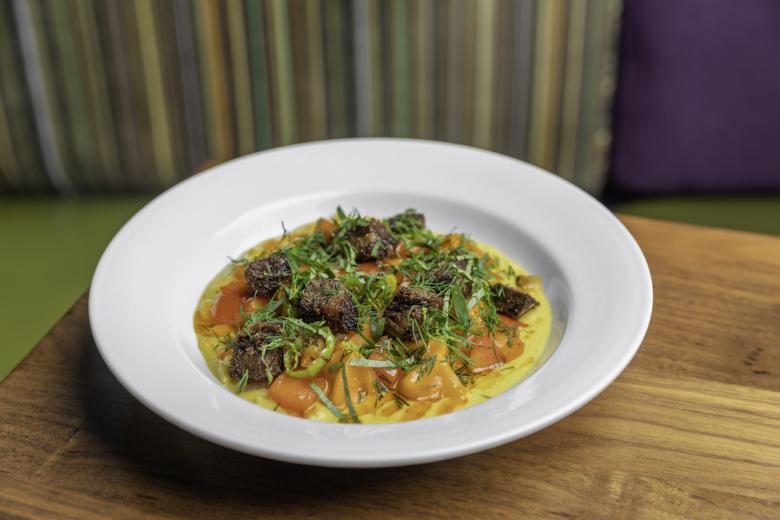