At Entre Sueños in Chicago, executive chef Stephen Sandoval uses Kumiai Oysters — briny and sweet farm-raised shellfish from Vizcaino Bay in Baja California, Mexico — and dresses them in a mignonette of Sugar Cube cantaloupe, shallot, vinegar and lime along with smoky morita chile and shaved Jamón Iberico fat that is charred to order in front of guests.

Sandoval said the idea was to create a dressing that fell somewhere between a classic oyster mignonette and aguachile that would dress ceviche in northern Mexico. The ham fat is inspired by the custom in Spain to eat Jamón Iberico with melon — similar to the Italian habit of eating melon with prosciutto.

Jeb Aldrich, the chef of Bar Vauté in Charleston, S.C., makes 30 traditional crêpes (with flour, eggs, butter and milk) and alternates them with layers of mascarpone Chantilly made by combining sweetened whipped cream and vanilla with mascarpone cheese and a little lemon zest. It’s then topped with a glaze made of sugar and hibiscus tea and is garnished with strawberry compote and sumac sugar. Aldrich plans to change the garnish seasonally, with plans for apples in the coming weeks.

Orange Fanta is a key ingredient in this Mexico City-style seafood cocktail at Urbe — Street Food of Mexico in Houston. Chef Paula Leguizamon, who works under executive chef Hugo Ortega, combines pieces of poached redfish and octopus, raw oysters and shrimp dressed in lime juice with cucumber, avocado, onion, tomato and jalapeño peppers as well as a splash of Fanta to give it “a tingly splash of flavor.”

Coconut shrimp is a rather standard appetizer, but Nicholas Calias, the food & beverage director at The Colonnade Hotel in Boston took a different approach for this version, which is served at the property’s Lucie Drink + Dine restaurant.

Instead of coating shrimp with shredded coconut, sweet white shrimp is chopped and mixed with cream of coconut, lemon grass, ginger and cilantro, rolled into bite-sized pieces and breaded in khadayif — shredded phyllo dough — and fried. It’s served in a sauce of mango purée, aïoli, habanero pepper and salt and garnished with cilantro. It has been a top seller since the restaurant opened earlier this month. 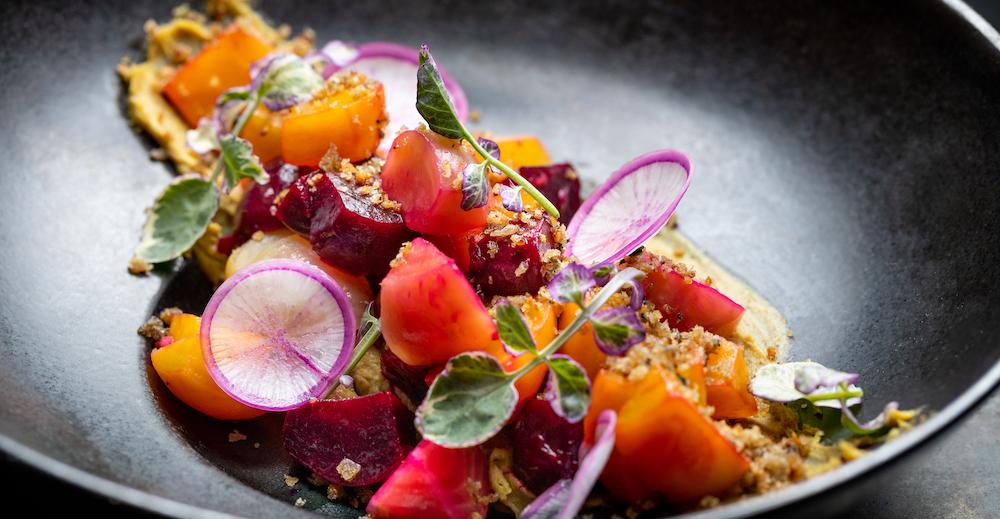