ADVERTISEMENT
Ham & Egg Ravioli
Chef Giovanni Rocchio is adding a modern twist to Italian cuisine at Valentino Cucina Italiana in Fort Lauderdale. With a specialty in pasta, one of his most sought-after dishes is Ham & Egg Ravioli featuring a ricotta filling with a runny egg yolk.
Uovo in Raviolo
Uovo in Raviolo—literally eggs in ravioli—has become an extremely popular dish. An article on Serious Eats traces the recipe's roots and and calls it “the kind of dish that people talk about for years.”
San Domenico
Serious Eats credits the origin of Uovo in Raviolo to the San Domenico restaurant in Imola, Italy, where the dish is still served today.
Potato Soup with Curried Pork Dumplings
A recipe for Potato Soup with Curried Pork Dumplings from the Washington State Potato Commission was recently featured in Restaurant Hospitality. The recipe suggest frying eggs sunny-side up and adding them to the top of each bowl.
Corn Tortilla Huevos Rancheros
A recent Restaurant Hospitality recipe for Corn Tortilla Huevos Rancheros suggests chefs crack one egg onto the center of the top tortilla and bake it for 10-15 minutes.
Photo credit: Mission Foodservice 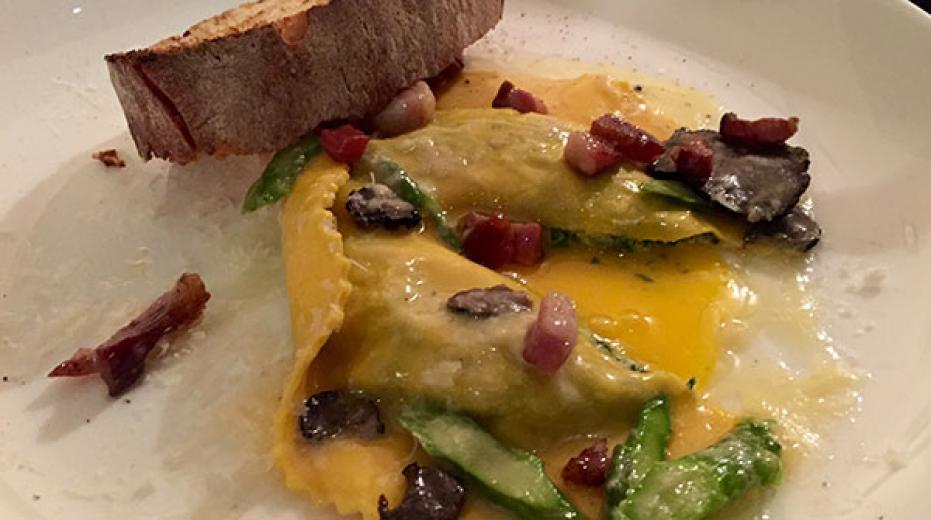 Next Up
New on the menu: Latin-inspired seafood cocktail and oysters
Start Slideshow ›