Customers at the New York City location of Moscow-based restaurant group Coffeemania can enjoy the Snowman, made with vanilla-cream-filled choux pastry, white chocolate glaze and a buttercream scarf. The dessert, priced at $12, can also be boxed as a holiday gift.

The Columbus, Ohio-based casual-dining chain is serving a crème brûlée trio as part of its two-course menu, through Dec. 29. The three-part sweet comes in peppermint, hot cocoa and vanilla bean.

The Las Vegas dining destination is serving peppermint hot cocoa crème brûlée for $12 through Dec. 25. The dessert is made of a hot cocoa-custard base with crystallized caramel, fudge brownie bites, candy-cane-flavored whipped cream and peppermint candy.

The Mediterranean restaurant based in New York City is giving hummus a holiday twist, as a dessert. The hummus dips are available in chocolate chip cookie dough, vanilla cake batter, fudgy chocolate and eggnog varieties, and comes with housemade cinnamon-dusted pita chips.

Gigi’s Cupcakes, headquartered in Dallas, has a host of winter flavors – chocolate peanut pretzel, caramel brûlée and peppermint chocolate – on the menu through Jan. 31, 2018.

The ramen shop in Oklahoma City has a seasonal dessert: eggnog ice cream, made with eggnog and whiskey, and topped with sesame brittle crumble and black lava salt. The ice cream is available through December for $5.

Dallas-based Eatzi’s Market & Bakery has multiple holiday goodies on the menu until Dec. 24, like chocolate mice – almond cookies covered with chocolate ganache and glaze – priced at $2.99 each.

This Tampa, Fla., bakery is serving gingerbread people Florida-style, with a beachside look. The twist on this holiday classic is available for $5 each through December.

In addition to the cakes, Baskin-Robbins is serving a new December Flavor of the Month: York Peppermint Pattie, or mint-flavored ice cream mixed with mini York peppermint patties and a dark chocolate-mint ribbon.

The ice cream chain, based in Portland, Ore., is offering holiday present options. A Pints of the Month club subscription entitles the receiver to five pints of Salt & Straw’s limited-edition monthly flavor series for three, six or 12 months. Other options are the Pick Your Own gift pack, a $65 one-time delivery of five customizable pints, and gift cards, which are available online and in stores. One of the seasonal flavors Salt & Straw developed is peppermint cocoa, a mix of homemade peppermint patties and chocolate ice cream.

This yuletide flavor is made with molasses cookie butter, rum royal icing ice cream and pieces of gingerbread.

Tipsy Scoop in New York City is collaborating with Popbar to make $5 boozy holiday popsicles. Blood Orange Champagne Sparkler pop is dipped in chocolate and chocolate sprinkles, and the Rum N’ Eggnog gelato is served on a stick with white chocolate and waffle cone pieces. Both flavors are available at Tipsy Scoop and Popbar through December.

Customers at CREAM, or “Cookies Rule Everything Around Me,” based in Berkeley, Calif., can enjoy the holiday season with the dessert spot’s Hot & Perfect Mini Pies, served in apple, blueberry or cherry, and available à la mode with ice cream and a sprinkle of edible gold glitter.

CRAFTkitchen, located in Henderson, Nev., is taking orders by phone for its Christmas baskets until Dec. 19. A basket is priced at $45 and contains one bag each of organic ground coffee, housemade granola, chocolate almond brittle, white candy cane bark with crushed peppermint, chocolate almond clusters and housemade jam.

This cookie shop in Jersey City, N.J., is offering a ginger molasses cookie for holiday shoppers, both in-store and online for shipping nationwide.

The quick-service chain, headquartered in Broomfield, Colo., is serving peppermint frozen yogurt throughout the season, available as soft-serve and hand-scooped

From now until Dec. 25, the Los Angeles bakery offers festive pastries like a reindeer éclair, or a pate à choux decorated to look like Rudolph the Red-Nosed Reindeer.

Pitchoun! also has Yule logs on its menu, such as the Red Dress, an almond sponge cake with streusel, vanilla mousse and red berry hearts.

Acacia House in St. Helena, Calif., is hosting its first annual Feast of Seven Cultures, where six guest chefs will each prepare a dinner menu every day starting Dec. 18. The weeklong event ends on Dec. 24 with chef and co-owner Chris Cosentino’s special tasting menu, which features a Meyer lemon, Buddha’s hand citron and fennel yule log as a dessert.

The Chicago restaurant is inviting customers to gather around a fire pit and watch a holiday film on its backyard patio on Dec. 21 with holiday-themed s’mores kits containing peppermint chocolate bark.

The New York City spot is taking pie orders until 6 p.m. on Christmas Eve. Two flavors available are poached pear and almond streusel pie for $29, and milk chocolate cultured caramel popcorn pie for $32. Customers who order two pies get 10 percent off, and those who order three pies get 15 percent off. For four pies purchased, there is a free fifth pie. Slices are available for individual dine-in guests for $6 each.

For the holiday crowd with a sweet tooth, Water Grill, based in Los Angeles, is offering a caramel bread pudding with alaea salt, or an unrefined sea salt mixed with volcanic red clay, and caramel ice cream.

Dunkin’ Donuts, headquartered in Canton, Mass., is getting into the seasonal spirit with its new Frosted Sugar Cookie Donut, filled with cookie-dough-flavored filling and topped with frosted sugar cookie bits, and its new Gingerbread Cookie Donut, frosted with caramel glaze and sprinkled with gingersnap cookies. The chain also offers the Snowflake Sprinkle Donut, decorated with red icing and snowflake sprinkles.

This holiday scoop is based on the Scandinavian mulled wine and mixed with cabernet caramel swirl and Aquavit-soaked raisins.

Headquartered in Dublin, Ohio, this quick-service chain is holding its annual Frosty Key Tag sale. The key tag, priced at $2, entitles the holder to a free Jr. Frosty with any purchase every day for a whole year. A percentage of the proceeds goes to the Dave Thomas Foundation for Adoption, a nonprofit organization benefitting children in foster care.

This Parisian bakery’s American branch, based in New York City, has a lineup of decadent bûche de Noël, or Yule logs, to bring holiday cheer to the table this year. The seasonal cakes come in dark chocolate, berry and chestnut for $42 each. 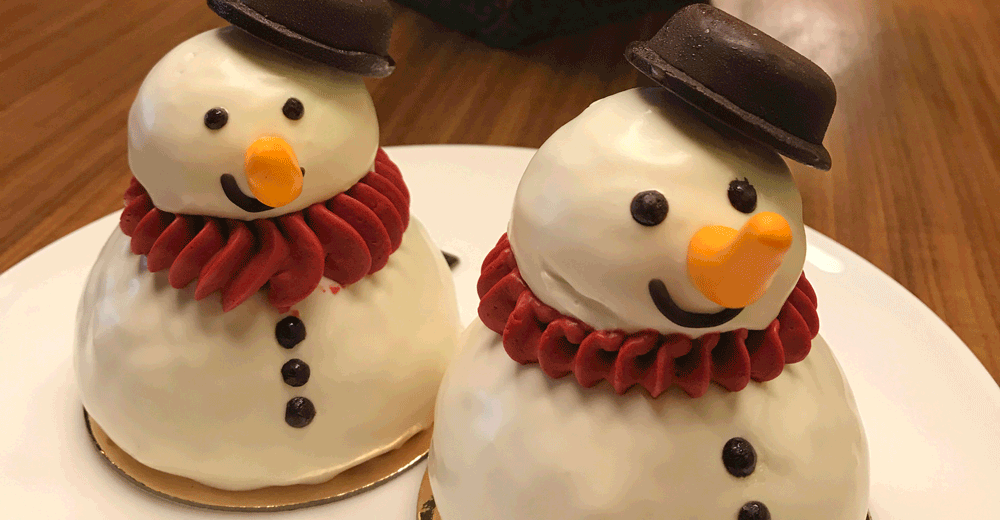