Long John Silver’s gave Twinkies a makeover this year with the release of a deep-fried version of the cream-filled cakes. The Louisville, Ky.-based quick-service chain introduced the new dessert on National Talk Like a Pirate Day as a free treat for customers.

"Black” foods were trendy in 2017, with restaurants imbuing beverages and desserts with activated charcoal to lend them dark visuals. The coloring found more mainstream exposure this year from chains like Nekter Juice Bar. The fast-casual chain, based in Santa Ana, Calif., offered customers the Scary Skoop, a charcoal vanilla treat made with creamy cashew milk, as a limited-time offer around Halloween.

Blossoms are more than garnishes, as seen in the increased appearance edible flowers in dishes to add color, taste and fragrance. Executive chef Steven Greene of Herons restaurant, located at The Umstead Hotel and Spa in Cary, N.C., recommends using the petals rather than the whole flower, so the flavor isn’t overwhelming.

The Atlanta-based chain introduced the Cookie BonBite, a chocolate-chip-cookie-covered cinnamon bun, on Dec. 4, in honor of National Cookie Day.

Though technically not a doughnut, this sushi dish took on the shape of the familiar dessert. Rice is molded to resemble a doughnut, then topped with raw fish, avocado, nori and other ingredients that would normally be found in a sushi roll.

The quick-service chain followed up with another creative concoction for Halloween: the Zombie Frappuccino, a tart apple and caramel beverage topped with pink whipped cream “brains” and a red mocha “blood” drizzle.

Another trend from 2017 was over-the-top treats, like a “freak shake” – a milkshake brimming with candy, drizzles, sprinkles, desserts, snacks and other extra bites – served at a number of spots.

Seattle-based Starbucks generated a lot of buzz in April with its Unicorn Frappuccino, a pink crème Frappuccino with mango syrup, blue drizzle, vanilla whipped cream, and a sprinkle of pink and blue powders.

Doughnuts got extra attention from restaurants this year. Flex Mussels in New York City gave the fried pastry a savory upgrade with its Everything Doughnuts – doughnuts with everything bagel seasoning and scallion cream cheese filling.

Clinton Hall in New York City has its own excessive treat: The WTF Waffle, a pile of waffles, ice cream scoops, sprinkles and other toppings.

After two years of testing, Taco Bell, headquartered in Irvine, Calif., rolled out its Naked Chicken Chalupa nationwide in January. The taco “shell” is made with crispy all-white chicken and stuffed with shredded lettuce, diced tomatoes, cheddar cheese and creamy avocado ranch sauce.

A special off-the-menu sandwich that was available at Arby’s this year was the Meat Mountain, a gigantic $10 combination of all the meat varieties the Atlanta-based chain serves.

A style of waffle that has been making waves on Instagram this past year is the bubble waffle, which hails from Hong Kong. On restaurant menus across the nation, the puffy waffle can be seen paired with savory or sweet toppings. The Roof’s winter pop-up at the Viceroy Central Park in New York City serves bubble waffles with caramelized bananas, vanilla Chantilly cream, walnuts and butterscotch.

Not to be outdone by its previous menu items, Starbucks pulled out all the stops for its Christmas Tree Frappuccino, a limited-time offer for the holiday season. The drink is a Peppermint Mocha Crème Frappuccino with a red-and-green blend, a matcha whipped cream “tree,” a caramel drizzle “garland,” candied cranberry “ornaments,” and a strawberry “tree-topper.”

Pumpkin spice has become a ubiquitous presence during fall, but a memorable seasonal menu item was the pumpkin spice pizza from Villa Italian Kitchen, headquartered in Morristown, N.J. Each pie is topped with pumpkin pie filling, nutmeg, clove, cinnamon and mozzarella. 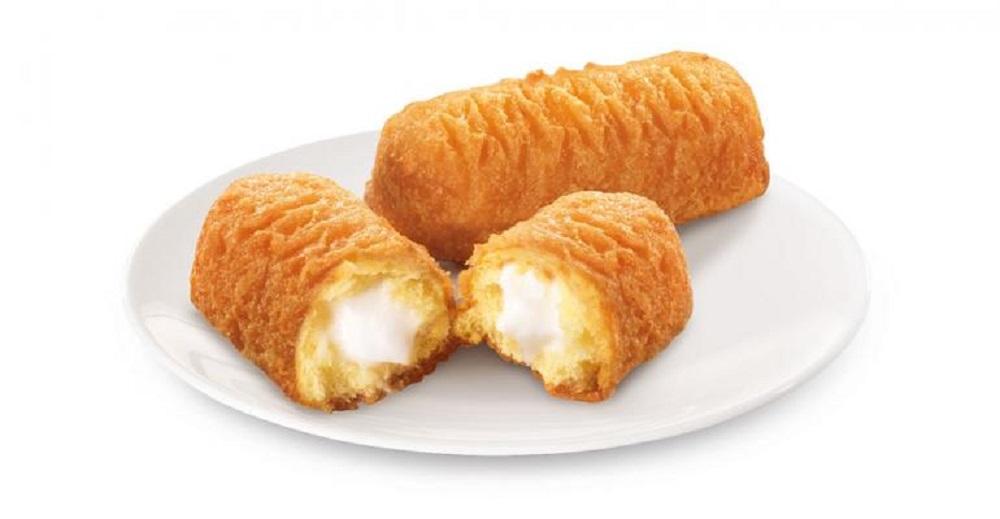