The classic cucumber-and-tomato salad is given fine-dining treatment at Veritas, in Columbus, Ohio, where local tomatoes at peak ripeness are peeled and then tossed in a tomato water vinaigrette with pickled English cucumbers.

The vinaigrette is made by puréeing greenhouse tomatoes with 2% of their weight in salt. That’s strained overnight and the resulting liquid is mixed with its equal weight of rice wine vinegar and emulsified with sunflower oil.

At Sunda New Asian, with locations in Chicago and Nashville, chef Mike Morales starts with a layered flatbread called roti parotta or roti canai and tops it with tuna sashimi, red onion, black truffle, foie gras aïoli and truffle tare — a sweet glaze common in Japanese cuisine that Morales finishes with truffle and truffle oil. He garnishes it with seasonal edible flowers.

Usually the fresher the fish, the better, but sometimes the Japanese like to cure their fish to develop different flavors. That’s what chef Nick Bognar is doing at Indo in St. Louis.

He takes Japanese seabream, or madai, and uses a water gun with a pike on the end to remove and clean out the spinal cord and main bloodline. Then he removes the rest of the bloodlines by hand, cleans the fish, scales it and removes the gills. Then he hangs it for 24 hours in a pharmaceutical fridge that maintains a temperature of between 2 degrees and 6 degrees Celsius (35-43 Fahrenheit). Once a thin, hard protective layer forms he wraps the fish in absorbent anti-microbial towels, which he changes about once a day for 3-5 days.

Next he fillets the fish, leaving the skin on, soaks it in cold water and blanches the skin by pouring hot water over it, which releases the layer of fat between the skin and the flesh. Then he slices it sashimi style, and serves it, skin-on, in a traditional ceviche sauce called leche de tigre that he makes by soaking fish bones and cartilage for at least a day in a blend of lemon, lime, sudachi, yuzu and fish sauce. Since he doesn’t let the leche de tigre cure the fish, Bognar says this isn’t technically a ceviche.

“We want it to taste like ceviche, but at the same time you get this fresh fish flavor.”

Availability: Indefinitely, depending on availability of madai

At Conversation, the new signature restaurant at the Thompson Seattle hotel, executive chef Derek Simcik is offering seasonally rotating oysters with condiments that reflect both the season and the flavors of the oysters themselves.

Currently on the menu are Kumamoto oysters, which Simcik says has a “melony sweetness.” He enhances that with what he calls strawberry dippin’ dots, which he makes by dropping strawberry sherbet base into liquid nitrogen to create little balls that resemble pearls.

As a counterbalance he makes “kimchi pearls” by adding agar agar to a gochujang dressing and then dropping it one drop at a time into chilled oil. The oil keeps the dressing from spreading out while also setting the agar agar.

Also at Conversation pastry chef Kate Sigel made this dish with the hopes of evoking the fresh flavors of spring and summer.

She starts with a moist sponge cake with puréed parsley, mint and lemon zest folded in, plus some olive oil.

She garnishes that with green apple purée set with agar agar, wheatgrass pearls made by spherifying slightly sweet wheatgrass juice, lemon sorrel sorbet and “matcha milk crumb,” which is like a streusel coated with white chocolate and tossed in matcha powder.

She plates it with edible flower petals and micro-sorrel and serves it under a sugar dome “so it looks a little like a terrarium,” that is shattered at tableside. 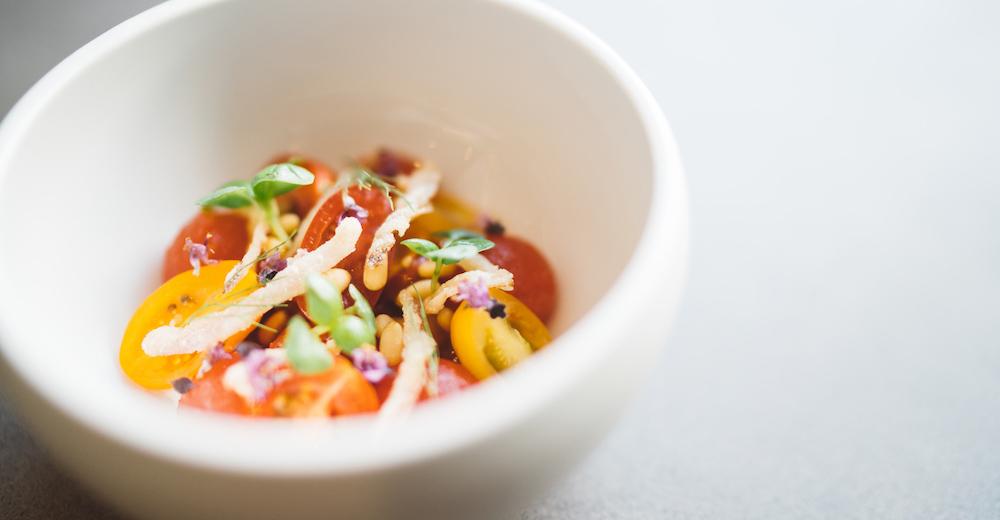 Next Up
4 creative cookie applications on desserts
Start Slideshow ›