Why move into a space with just one restaurant concept, when you can do two?

That appeared to be the thinking behind the new seafood restaurant Sawyer, which opened in Los Angeles’ Silver Lake neighborhood in May. Directly next door to the 2,400-square-foot Sawyer is a cold-pressed juice bar named Clover.

Open for dinner and brunch on weekends, Sawyer seats 90, both indoors and outside on a back patio. On the menu are shareable plates, like salt cod brandade with whipped potato, white truffle and rosemary anchoiade crumble; a soft-shell-crab sandwich with red cabbage, scallion mayo and black bread; or duck-fat popovers with Shropshire English blue cheese.

Clover is owned by Laughlin with partners Andrew and Cassandra Walker. It’s the second brick-and-mortar location for the juice concept, and bottled Clover juices are also available in other retail locations across Los Angeles.

Here’s a look at the new Sawyer.

Sawyer seats 90 indoors and outside on a back patio. The décor is meant to evoke an airy garden.

Two communal tables are at the center of the room. Partners Beau Laughlin, Brett Cranston and Jay Millikan served as general contractors in collaboration with Carlos Anthony Lopez.

A hand-made copper door separates the seafood restaurant from the juice bar. The open brick on one side contrasts with the flowered wallpaper across the room.

The tiled bar is topped with butcher block.

Dario Dell’Anno, formerly of Los Angeles restaurants Providence, Bastide and Mozza Osteria, is also a certified sommelier and has hand-picked wines for the restaurant. Devon Espinosa, formerly of The Tasting Kitchen and The Church Key, is heading the cocktail program.

The secluded back patio is rimmed with olive and birch trees and has a fireplace. Unfortunately, Clover customers don’t have access to the patio during the day. 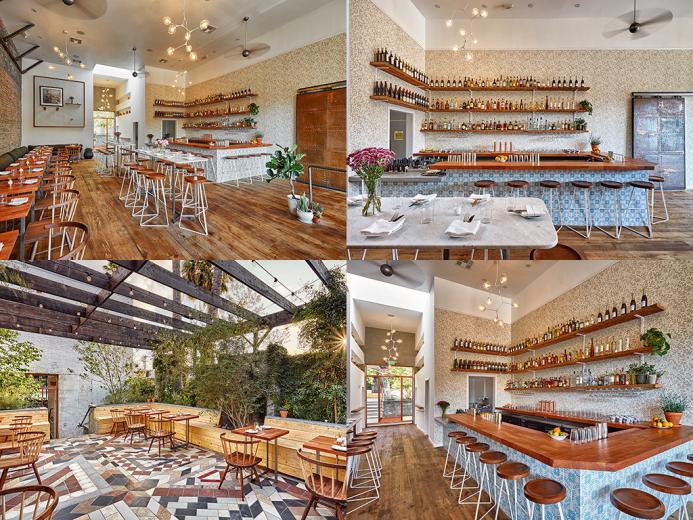