With a flagship restaurant in Charlotte, NC, and a second in Charleston, SC, 5Church combines a technique-driven menu, Southern hospitality and edgy interior design. The third incarnation of the modern American concept opens in Atlanta this week.

Behind the business are partners Ayman Kamel, Patrick Whalen, Alejandro Torio and Jamie Lynch. The team got together in 2012 to open the first 5Church (named for the Charlotte intersection where the original restaurant stands). The Charleston location opened last November.

Kamel, a former Cheesecake Factory director of operations, met Whalen when they were working together in New York. They’d discussed partnering eventually and after Whalen relocated to Charlotte, he convinced Kamel to join him. The duo recruited Whalen’s colleague Alejandro Torio to handle marketing, followed by the final piece of the puzzle, chef Jamie Lynch (most recently of Charlotte’s Blue Restaurant & Bar and Barrington’s Restaurant), a veteran of prestigious kitchens including Le Cirque, Aureole and Café Boulud.

The menu features “firsts” like charred octopus with red pea hummus ($13) and entrees such as herb roasted chicken with wild mushroom bread pudding ($24) and the “60-second” New York strip ($38).

The strategy behind spreading out the locations was intentional. “We wanted to be unique and hot all the time in every market we entered,” explains Kamel.

As for more units, Kamel says, “nothing is in the plans at this point. We’re focusing now on making an impression in Atlanta. Six months or a year from now? I don’t know.”

That Whalen, Kamel and Torio have nightclub backgrounds is reflected in the dark, sensuous  neo-Victorian dining room. Each restaurant features wall art by local artists. Hand-tufted leather banquettes look and feel indulgent. This street scene painting is the work of a local artist.

Feather-flocked pendants illuminate the concrete bar. The ceiling of each restaurant bears the entire 40,000-word text of the ancient novel, The Art of War.

A theme of "5" runs throughout the restaurant, as seen in this buffalo nickel.

Another "5" reference is this artist's take on the $5 bill. 5Church has been described as “rococo” and “avant garde.” It was designed by the Charlotte firm Reaching Quiet.

This mural greets diners in the stairwell of 5Church Atlanta.

About half of the 5Church menu stays the same from restaurant to restaurant. Lynch works with each unit’s executive chef to tailor the menu for their respective markets and source local ingredients. Shown here: Smoked duck confit with a cabbage pancake, duck egg and spicy plum sauce.

Lynch's simple food philosophy belies his often-complex offerings: “I approach food with the philosophy that if you take proper care of the ingredients, then they’ll do the rest,” he says. Shown here: Pastrami cured hamachi with red mole, radishes, finger limes and corn nuts. 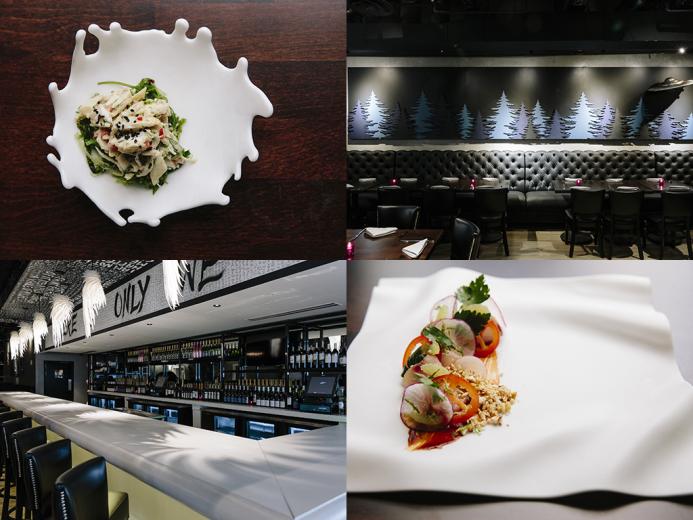