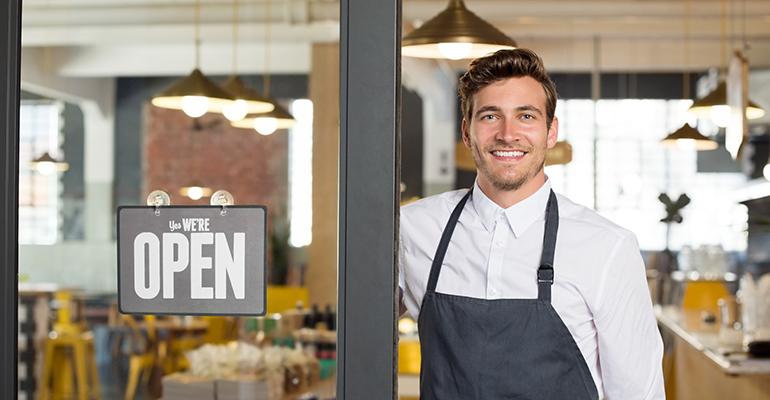 When chef Waldy Malouf opened Waldy’s Wood Fired Pizza & Penne in New York City, in 2006, he decided to name the restaurant after himself, as many rising chefs do.

At the time, Malouf was best known for Beacon, his New American restaurant, also in New York City.

“Having a fairly good reputation as a chef and a wood-burning fire expert, an unusual name — I thought it’d be good,” he said.

It did turn out to be good, but not for Malouf.

A few years in, Malouf and his then-business partner, Rob Dixon, had a falling-out about the direction of the restaurant that pit them against one another in a legal battle. In 2010, after he said a judge continued to side with his partner, Malouf walked away from what he called “an unhealthy situation,” leaving the business with his name behind. Today, the namesake restaurant is still open, although Malouf is no longer involved. Dixon was not available to respond by press time.

Malouf’s story is not unique.

“It’s an issue that has been around forever, since people have used surnames as business names,” said Sheila Fox Morrison, an attorney with Davis Wright Tremain LLP who provides trademark and brand protection services to industries such as food and beverage, restaurants and entertainment. “It’s probably happening more now in the restaurant industry than in the past.”

Cases of chefs fighting for — and losing — the right to use their name have been increasingly reported in recent years.

Among the most prominent cases is Dallas-based chef Kent Rathbun. Last year, he began going by “Chef With No Name” after being unable to use his own name in the restaurant industry. Rathbun reportedly signed the rights to his name to then-business partner William "Bill" Hyde Jr., with whom he launched H2R Restaurant Concepts in 2007. Then in April, a temporary restraining order barred Rathbun from using the phrase “Chef With No Name.”

And in March, arbitrators ruled in favor of By Chloe backers ESquared Hospitality to terminate ties with the vegan chain’s namesake co-owner Chloe Coscarelli, enabling the expansion of the concept without Coscarelli’s involvement.

The question on the minds of many in the industry is what, if anything, can be done to help other chefs circumvent conflict and retain the right to use their own good names.

“It’s very difficult to file a trademark for a name before you’ve made one for yourself,” Morrison said. “Once you get in the business, are there for a while, then you can file for a trademark for your name.”

But the cost of hiring an attorney to execute a trademark search and register the trademark, which Morrison said typically runs about $2,500, is often a barrier for emerging chefs. Even when a trademark is obtained, it’s never ironclad.

“These things are never clean,” Morrison said. “It kind of bums their high. Creative types don't really want to hear about all the things that are going to go wrong in the future.”

Lacking a trademark doesn’t mean chefs can’t protect themselves. The first step is having the conversation with partners early on, then getting it in writing, Morrison said.

“You can have a restaurant and your own separate identity,” she said. “Developing a name not associated with your own name gives you flexibility.”

But many chefs never have that discussion with their partners, and if they do, they neglect to document it.

“I’m shocked and amazed at how rarely this happens,” Morrison said. “The people I worry about are the people it doesn’t occur to. [The people] going by the seat of their pants are the ones that get beaten up the worst.”

The Culinary Institute of America is trying to ensure that its graduates don’t get beaten up over this issue.

“Chefs eager to launch their first restaurant or do something new and exciting think what is most important is the cooking,” said Tim Ryan, president of the CIA. “Not looking at the fine print can come back to haunt you.”

The CIA has been taking curricular measures to responded to these issues since they began to emerge in the 1990s, following the first big wave of American chefs who started to become restaurant owners in the 1980s, he said.

“It’s only escalated,” Ryan said. “As chefs are opening more restaurants, they have more partnerships.”

Among the curricular changes was the launch of the culinary school’s first bachelor’s degree program in 1993. As these kinds of issues have become more prevalent, the CIA has responded by adding more relevant courses. Next year, the CIA will add even more legal courses to its curriculum, Ryan said.

“Our general recommendation is that chefs don’t name restaurants after themselves,” he said. “That helps them to limit exposure to their personal brand, but helps them set up for a future sale.”

Even when chefs take the right precautions, sometimes using their name as the restaurant’s name still lands in litigation.

“I realized a long time ago that my name is valuable, so I trademarked it,” said David Burke, the celebrity chef known for culinary innovations such as pastrami salmon and cheesecake lollipops.

Despite having the foresight to trademark his name several decades ago, Burke is among chefs whose name is attached to restaurants with which he is no longer a participant in operations or culinary development, including David Burke at Bloomingdale’s and David Burke Kitchen in New York City, David Burke Prime at Foxwoods Resort in Connecticut, and Burke in the Box at McCarren International Airport Las Vegas.

Between 2006 and 2010, Burke, through his corporation the David Burke Group, licensed his name to several leases where those concepts are located. Following a falling out with investor Jeffrey Citron in 2013, Burke resigned from the company, which later became Craveable Hospitality Group. There is currently a royalty-free license agreement in place for the duration of the leases, and Burke is in litigation with Craveable Hospitality Group.

Stephen Goglia, president and CEO of Craveable Hospitality Group, declined to comment due to the ongoing litigation between the company and David Burke.

But Burke has moved on. He most recently partnered with ESquared Hospitality on Tavern62 by David Burke, a modern American tavern in New York City, and he has other projects in the works.

“I have to move on. Pick up the pieces. Take my tools and my brand,” Burke said. “There’s always something up my sleeve. The next cheesecake lollipop is just around the corner.”

Adijatu Jalloh brings the flavors of home to her catering business
Jan 26, 2023

Jahqyad Austin forges his path as a pastry chef
Jan 12, 2023