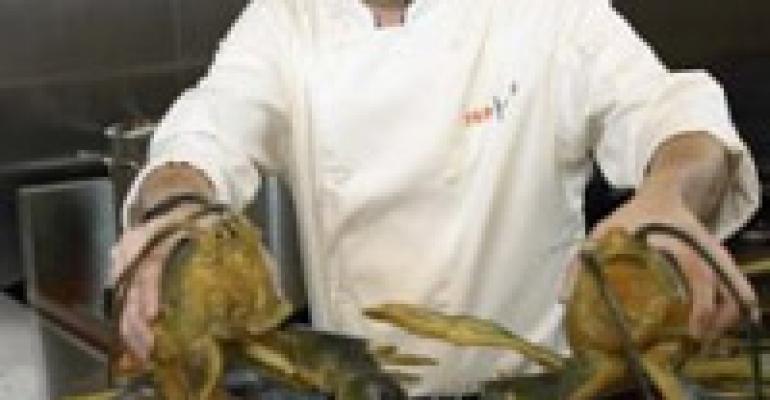 They’re Talented And Famous. Why Don’t They Have Better Jobs?

The fourth season of Bravo’s “Top Chef” reality show premiered Wednesday, with 16 contestants who hope to cook their way to fame and fortune. We hope that whoever prevails has a better post-show experience than the previous winners: Season One’s Harold Dieterle (who after lengthy delays, finally opened his Perilla in New York City); Season Two’s Ilan Hall (still “between jobs,” although rumored to be heading up a taco stand in Los Angeles soon); and Season Three’s Hung Huynh (currently cooking at a kosher restaurant in New York City). Top Chef champs get $100,00 and priceless media exposure for their win; maybe Bravo should throw in a session with a career coach as well.

The first edition of “Top Chef” offered a field of contestants filled with wannabees, never-weres and a handful of solid cooks. Season Two’s group had better technical skills and more real-life experience in good restaurants. The show’s producers really upped the ante in Season Three by choosing a number of accomplished pros for the cast. On paper, the group chosen for Season Four ranks at about the same level of skill and experience and experience as that of Season Three: Lots. It all adds up to another season of high ratings for Top Chef, one of cable TV’s biggest success stories ever and a powerful force in driving interest in high-end restaurants and the people who work in them.

You’d think those who had triumphed in the previous contests would be well on their way to culinary stardom by now. We know by the end of each season’s final episode that the winner has more than enough of the cooking skills and inner drive needed to run his or her own restaurant kitchen, plus $100,000 to kick start the process of acquiring one and legions of fans who will want to eat there when they do. Savvy restaurant investors should be throwing job offers and ownership deals to Top Chef winners the minute the season finale is over.

None of which explains the post-show careers of the first three Top Chefs.

Harold Dieterle has found the most success. He had been sous chef at Jimmy Bradley’s The Harrison in New York City before his win on the show. He had nice credentials, to be sure, and Dieterle parlayed them, slowly, to open his own restaurant, Perilla, in May 2007. His Greenwich Village operation has 18 tables, 10 seats at the bar and serves up New American cuisine, tinged with the occasional Asian flavor.

How’s it going at Perilla? “It’s earnest, endearing and just a bit of a snooze: a classy neighborhood place with more pull than Mr. Dieterle’s cooking—accomplished but hardly riveting—justifies,” wrote New York Times critic Frank Bruni in his one-star revue. “If what you seek is a soothing roster of agreeable dishes executed with an awareness of the season and ample finesse, Perilla will likely draw you in.”

Most reviewers note how busy the place is. It should be. A lot of people who watched and rooted for Dieterle week after week on Top Chef have been and remain eager to see what he does with a place of his own. The 31-year-old Dieterle is a low-key guy, but he wound up with a nice business by managing his post-Top Chef opportunities well.

Not that it was easy. “It took me over a year of personally being unemployed to raise all the capital and find the location,” Dieterle says.

But at least he did both. Top Chef winners Hall and Hung are still looking.

The 25-year-old Hall had been a cook at Casa Mono, a Mario Batali’s Spanish tapas restaurant in New York City, prior to his appearance on Top Chef. He quit his job there after the show had finished taping, but before it aired. Hall has since been rumored to head at least one New York City restaurant, a new venture from Spotted Pig impresario Ken Friedman. But that deal fell through. Just this week, Hall made a one-night-only appearance at Studiofeast, a Brooklyn venue whose website describes it as an “invitation-only culinary collective.” His adventurous menu there:

The meal cost $100, with $25 going to charity. Wine was not included. It was billed as a last chance to eat Hall’s food before he embarked to Los Angeles, where New York magazine reports he will be opening a taco shack.
His fans—and he had plenty of them after the show—may be thinking, “CIA grad, Top Chef winner, off-the-chart name recognition, $100,000 in his pocket, good on TV—maybe he hasn’t made the best career decisions so far.” We hope he gets it going soon.

When we last saw Hung Huynh, he had just won Season Three of Top Chef thanks to a terrific sous vide duck dish that clinched the final challenge. If ever there was a chef for whom the sky was the limit, he was the one. The 30-year-old Hung possessed the technical cooking skills of a god, spoke four languages, had grown up in a restaurant family, was a CIA grad and was then working as executive sous-chef at Restaurant Guy Savoy in Las Vegas, newly awarded two stars by the Michelin Guide. Throw in the nationwide celebrity given him by the show and the $100,000 and you had a guy poised for stardom like no one before.

However, the first place Hung popped up was the kitchen of Solo, a kosher restaurant located inside the Sony Building at East 55th and Madison Ave. in midtown Manhattan. Its Mediterranean-Asian cuisine is right up Hung’s alley. He’s head chef for the month of March, and this job at least shows that Hung is always up for a challenge.

As the Solo press release puts it, “His immense talent and versatility will allow him to easily transition to kosher cuisine, as he’ll use Solo’s fresh meats and produce to create amazing dishes that don’t include the non-kosher ingredients and additives that he’s accustomed to cooking with.” Solo’s on-staff rabbi will be present to make sure Hung follows strict kosher rules about food.

We don’t know where Hung will go next, but at least his post-Top Chef activities are demonstrating that he’s an ambitious guy. As for whoever wins this year’s edition of the show, we suggest that your first call be to chef agent like Scott Feldman at Two-Twelve Management. He can put you on the fast track to where you want to go, wherever that might be.