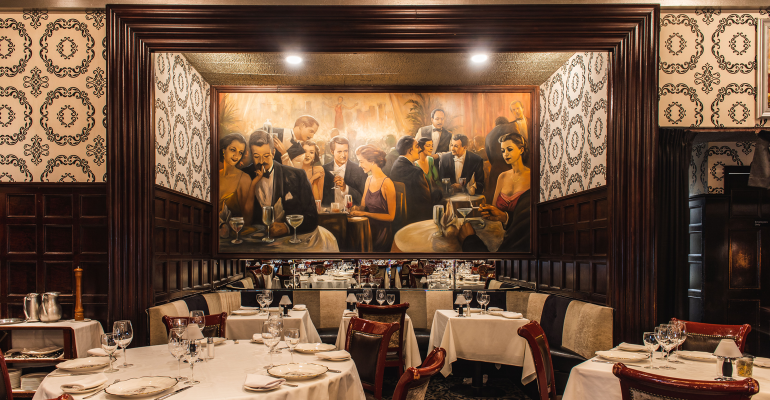 As Restaurant Hospitality celebrates its 100th anniversary, we are putting the spotlight on restaurant centenarians in an ongoing series. These are concepts with staying power.

When Delmonico’s Steak House — originally known as “Restaurant Français des Frères Delmonico” — opened in New York City’s financial district in 1837, the menu was entirely in French, food deliveries were made by horse and buggy, and fine dining was a foreign concept to most Americans.

Although Delmonico’s began life as a bakery opened by Peter and John Delmonico in 1827, a decade later it had morphed into one of the nation’s first restaurants, serving delicacies most Americans had never tasted before, like artichokes and eggplants. Before Delmonico’s, people mostly ate at inns and taverns, which were more focused on drinks than food, said Paul Freedman, historian and co-author of the book “10 Restaurants That Changed America.”

Now, 182 years later, Delmonico’s is one of the longest running restaurants in New York City, with only a brief interlude from 1917 to 1927, when it was closed during Prohibition and reopened by the next generation of owners, the Tucci family.

“In the 19th century they established a tradition that was durable,” Freedman said. “Until the turn of the century it was the most famous restaurant in the United States and was the standard to which other restaurants were held. People forgot it was a brand name, and it almost became simply short-hand for ‘fancy restaurant.’ That history and reputation has carried over even to today.”

In addition to holding the title of the first “fancy” restaurant in the country, Delmonico’s is home to several other restaurant industry firsts: The iconic Baked Alaska ice cream, cake, and meringue dessert was allegedly invented by Delmonico’s chef Charles Ranhofer in the late 19th century.

The restaurant also created the first wine list, which was separate from its original 11-page menu. The 1838 Delmonico’s wine list, for example, offered a selection of Red Bordeaux, White Bordeaux, Red Rhone, White Rhone, Burgundy, and Champagne bottles for an average of $12 per bottle.

Delmonico’s also inadvertently became the first farm-to-table restaurant, though that phrase would not be coined until a century-and-a-half later. When the Delmonico brothers first opened the restaurant, they were unhappy with the quality of produce in nearby markets, so they bought a farm in Williamsburg, Brooklyn, to grow their own ingredients and introduce customers to a new wave of American produce.

Delmonico's ladies-only luncheon in 1902
Photo: Bryon Collection at Museum of the City of New York 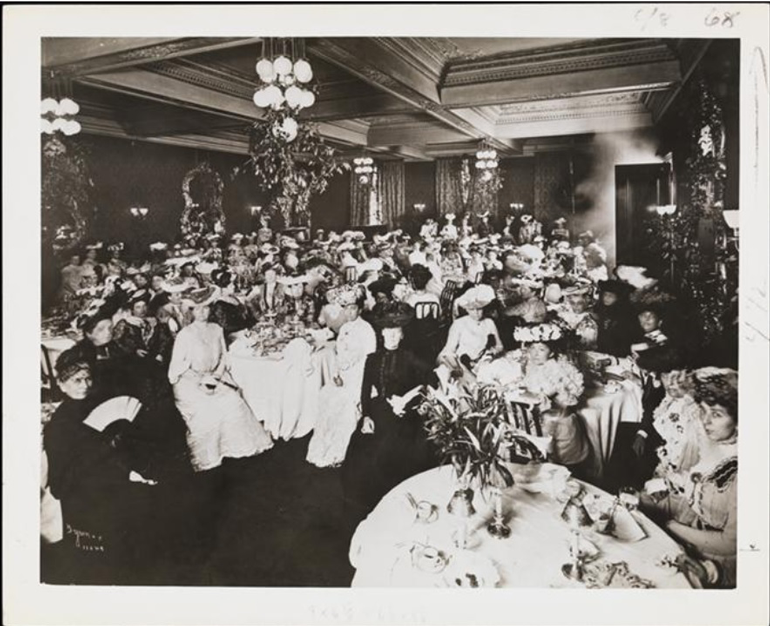 But perhaps one of the most popular stories in Delmonico’s long culinary history is that it was one of the first restaurants to allow women to dine unaccompanied by men. As the story goes, in 1868, Delmonico’s was holding an event hosted by the New York Press Club in honor of legendary author Charles Dickens.

According to Freedman, women were barred from attending the event unless they sat behind a curtain. A group of female reporters led by journalist Jane Croly became furious at the slight and decided to start their own club, which became known as the Sorosis Club: the first professional women’s club in the United States. Delmonico’s offered to host the club’s first ladies-only luncheon, and 151 years later, still celebrates the historic event with an annual anniversary lunch.

Even with Delmonico’s long-lasting reputation and extensive list of industry milestones, many Americans may recognize the name but are surprised to learn that the restaurant is still in operation, Freedman said. Fortunately this has actually proven to be an advantage, as the restaurant’s current executive chef Billy Oliva has been able to update the menu — honoring tradition by keeping dishes like their famous Lobster Newburg (another invention of theirs) on the menu but as an updated version over pasta — or by adding vegetarian items.

“Delmonico’s has always had a menu that not only appeals to American tastes but features American products served with the aura of French service and elegance,” Freedman said. “The restaurant has become ‘fancier’ over the decades, not so much in terms of formality but in attention to detail and quality, and in offering the certain kind of spirit that takes advantage of the beauty of tradition.”