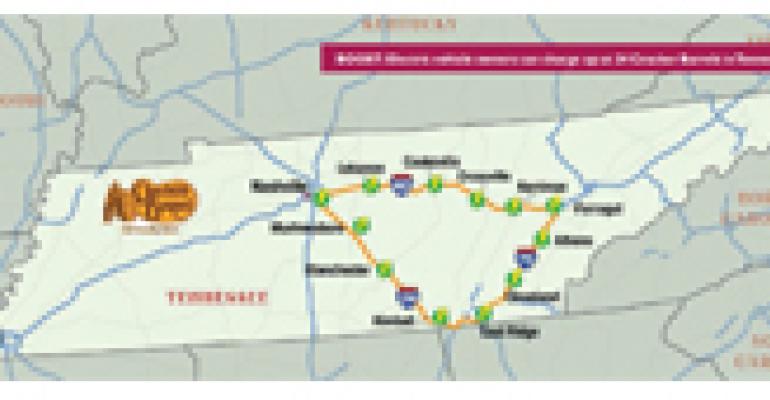 Power To, And From, The People

Struggling to find room in this year's budget for your restaurant's sustainability initiatives? Let's take a look at two options that are basically free.

Cracker Barrel is going green in a big way by installing electric vehicle (EV) chargers at 24 of its Tennessee locations. All units are located on the “Tennessee Triangle,” a 425-mile loop of interstate highway that connects Nashville, Knoxville and Chattanooga.

The chain is partnering with EV Project, a group working to expedite the adoption of electric cars by creating a charging infrastructure throughout the U.S. At Cracker Barrel, half the units will be equipped with DC Fast Charging stations, which give electric vehicles their recommended charge (80 percent) in the 30 minutes it takes the car owner to eat a meal. The other 12 restaurants will offer BLINK EV L2 chargers, meant to provide just a ‘tank topping’ charge. Customers pay a recharging fee whenever they hook up.

Cracker Barrel's up-front costs are microscopic. The company is part of a two-year pilot program, so the EV Project is supplying the charging units. It's a two-year deal that can be renewed. It's a move that will enable the chain to build green street cred fast.

“While ownership of electric cars is small compared with traditional vehicles, there's great curiosity about them, and so we expect our guests will be quite interested in seeing these charging stations when they stop in with us,” says Cracker Barrel chairman/c.e.o. Michael Woodhouse. “We like to think that our guests will be pleased to see Cracker Barrel taking an active role in exploring energy alternatives that are aimed at protecting the environment, as well as strengthening our economy.”

Cracker Barrel has 597 company-owned units, 67,000 employees and annual sales of $2.4 billion. So it's relatively easy for them to make a huge move like this. But what if you're a single-unit operation with zero budget?

That's where Carrotmob comes in. It's a San Francisco-based nonprofit group whose members aim to make the world more sustainable and are willing to spend money at businesses that will do their part to make it happen. “In a Carrotmob campaign, businesses compete at how socially responsible they can be, and then a network of consumers spends money to support the winner,” the group says.

The process begins when a Carrotmob organizer approaches a group of businesses such as restaurants. He or she offers this deal: a “mob” will show up and spend money — full-price meals! — at whichever restaurant will spend the greatest percentage of the receipts on a sustainability-related improvement. “It's like a boycott in reverse,” Carrotmob explains.

The winning business becomes greener at little or no cost, thanks to the extra revenue derived from the flash crowd the Carrotmob event attracts. The publicity generated by the event should also have a payoff.

Oswego, NY, restaurant Canale's recently beat out 10 other area operations to bring the mob to its dining room. Its deal: a 100-person “mob” would spend money at Canale's if the restaurant would spend 30 percent of the take on something green — in its case, an energy audit.

“We've already done a lot at the restaurant, such as changing the lighting, recycling our fryer oil, putting in programmable thermostats, buying recyclable packaging and installing motion sensors on our lights,” owner Nick Canale, Jr., told website syracuse.com. “I'd like to do more.” Carrotmob gave Canale's a low- to no-cost way to pull it off.

The group has produced more than 100 similar events around the world since 2008. If you're approached, you may wish to give it a try. Unless you operate on large scale like Cracker Barrel, it might be the smartest way to go green you can afford.