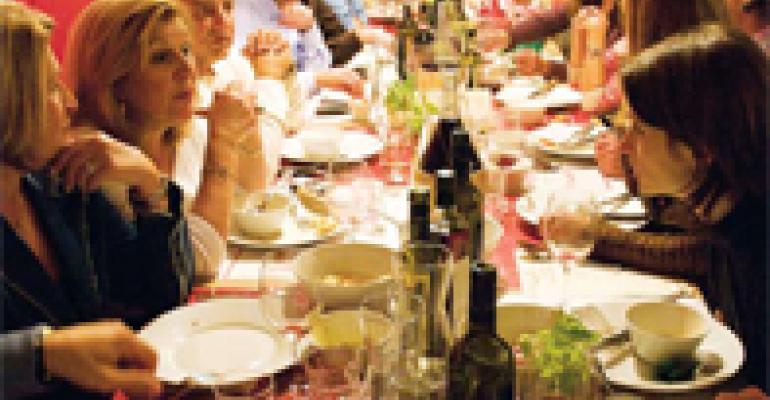 Looking for something new in Italian cuisine is a bit like looking for something new in a retirement home. Italians cling fiercely to their regional traditions and their local ingredients. You don't monkey with successful recipes, you don't find many Sicilian dishes in Venice, and Italian diners are not terribly experimental. Still, there are some interesting foods that could become trends on this side of the Atlantic. Here's what I learned on a two-week trip through northern Italy and from chats with insiders.

As a pork lover, I was delighted to see the growing popularity of porchetta in northern Italy. This meat loaf is made one way in Tuscany and another way in Umbria, but the basic concept is the same: Gut and bone the trunk of a hog, but leave the skin and subcutaneous fat on. Slather the meat side with herbs, roll it up into a tube, roast and slice like a giant salami — skin, fat and all. In Latium and Umbria the stuffing often contains organ meats and the whole hog is cooked head and legs on. The result is served hot or room temp, and it is highly aromatic, juicy, crunchy on the outside and incredibly flavorful. Authentic porchetta is not likely to be a hit in L.A., but there's no reason why a variation made from a skinless pork loin couldn't take off there.

One ingredient that I saw in several of the markets and on menus is broccolo romanesco. It is a lime green cauliflower with spiky florets that tastes like a cross of cauliflower and broccoli, perhaps a bit sweeter. It can be cooked like cauliflower, steamed, boiled, sauteed or used in soups. The Italian version is spikier than the California product called broccoflower, but they're similar.

High-end extra virgin olive oils are in all the fine wine shops. It does not take a stretch of the imagination to envision “varietal” olive oil taking off in the U.S. once connoisseurs learn about the different olive varieties in the same way wine lovers learned grape varieties in the 1970s.

Balsamic vinegars are replacing wine vinegar on the tables of many restaurants, and they are right alongside the oils in the wine shops. The problem is that there is a lot of cheap balsamic, sweetened and colored brown, and there is no way for chefs to judge the authenticity and value of this delicious condiment. Recently some of the producers of Balsamic Vinegar di Modena have formed an association and developed a labeling system that ranks the vinegars by age and quality using a 1-4 grape leaf scale on the label. Alas, it is not clear how well the producers adhere to the loose regulations, and not many producers have adopted the regimen. If they do, balsamic, which has already risen from obscurity in this country in just a decade, could really take off.

Judy Witts Francini, a cooking teacher in Florence, said colatura di alici is being used in more recipes. It is a brown concentrated salty fish sauce made from the liquid from the salting of anchovies in barrels. A precursor of Worcestershire sauce, it is closer in flavor to Asian fish sauces and is added to pasta sauces, seafood and greens as a flavor enhancer.

Maureen Fant teaches cooking and shopping classes in Rome and has written often on Italian food for the New York Times. Her definitive guidebook, Trattorias of Rome, Florence & Venice, can steer the hungry traveler away from soggy pizza and overcooked pasta. She said pizza bianco (without tomato sauce) is on the rise, and she is especially fond of a version made with figs and prosciutto. Braised oxtails, actually made from cattle tails, seem to be showing up on more menus too, she observed.

Mimmo Magliulo owns BuonItalia (bonitalia.com), which imports artisanal foods from Italy. He thinks hand-made Italian pasta could catch fire. “Customers can tell the difference,” he maintains. “It is very porous. The flavor is very intense and you can feel the grain. The sauce goes inside the pasta and you can eat it with just a little extra virgin olive oil. It is dried at very low temperatures, not hot, like industrial products. This keeps it alive. The price is only 20-30¢ or so more per portion, but restaurants can charge a lot for it.”

There is a small stink being made by Chef Filippo La Mantia of La Trattoria in Rome over garlic. He wants chefs to cut back on the aromatic bulb in order to make the food more delicate. The movement has gained a few followers, among them Prime Minister Silvio Berlusconi, but is by no means a trend. Eliminating garlic would be like eliminating pasta: impossible. And nothing to be encouraged as far as this diner is concerned.

An unhappy trend is the continuing battle over fraudulently labeled wine and olive oil. In 2008 several important wine producers from well-known regions were caught using wines or grapes not approved for use in the region, and over the past decade several cases of cheap imported olive oil have found their way into bottles labeled Italian extra virgin.

Alas, it seems that far too many Italians still practice what the Italian writer Luigi Barzini described as “the art of living as if all laws were obnoxious obstacles to be overcome somehow.” This is, of course, a pity because it severely undercuts the brand “made in Italy.”

Craig “Meathead” Goldwyn has written hundreds of articles about food and drink for the Washington Post and Chicago Tribune, and he demonstrates his love of pork and all things grilled at AmazingRibs.com.