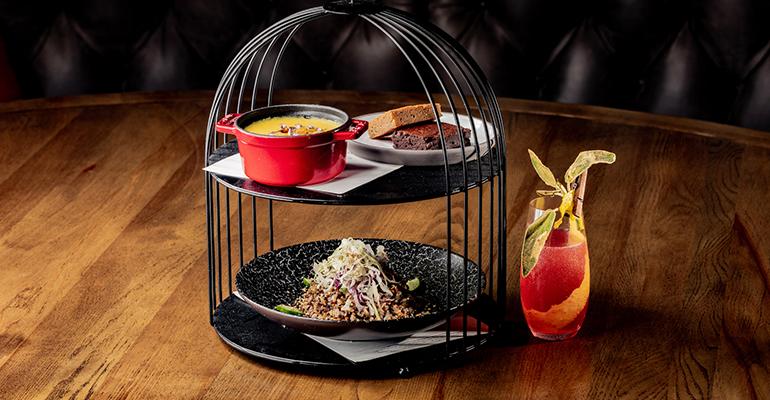 Getting diners back at lunch

The days of the three-martini lunch are long gone. American consumers this year made 11 fewer visits on average to restaurants for lunch than they did in 2008, according to market research firm NPD Group, with numbers slipping from 72 lunches purchased per year to 61. As the workday lunch hour nearly disappears in favor of quick bites fueled by grab-and-go sandwiches, restaurants are compelled to get creative in order to keep their midday traffic up.

“People spend less and less time having lunch,” said Daniel Boutarel, engagement director at the New England Consulting Group. “They eat at their desks and don’t want a full meal at lunch because they’ll get into a food coma. You need to meet guests where they are […] We’ve evolved as a society toward valuing experience.”

So how can restaurant operators get those diners back? Here are four creative approaches to the disappearing lunch hour dilemma.

Homage Ltd — an offshoot of the original Homage in San Francisco from chef David Kurtz known for paying “homage” to different local farms every month — recently opened in July. Unlike its predecessor, the 820-square-foot restaurant also offers a dinner menu, but the concept was designed with Financial District lunchtime customers in mind. 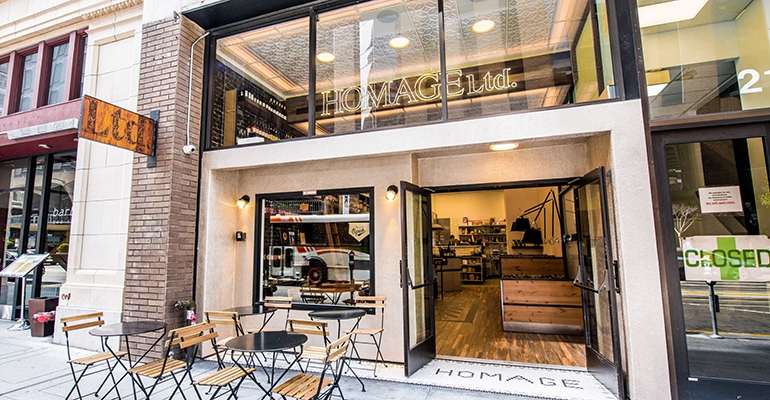 “Homage LTD is currently the only restaurant on the block with outdoor seating and that makes us stand out,” Homage Ltd. Designer Gi Paoletti of Gi Paoletti Design lab said. “If you give people a chance to be seated close to the entrance […] then all of a sudden you’re filling up during your slow time and creating a buzz.”

Paoletti also chose to replace the original dark red restaurant entryway with a metallic rose gold “so it shimmers and turns heads,” along with a white neon sign that “shines like a beacon” through the window.

Inside the restaurant, there is a clearly designated path from the entrance to the food pickup counter. When customers get to the front of the line to order their salads and sandwiches, the actual counter is shorter than most long, assembly line-style counters, resulting in shorter wait times. 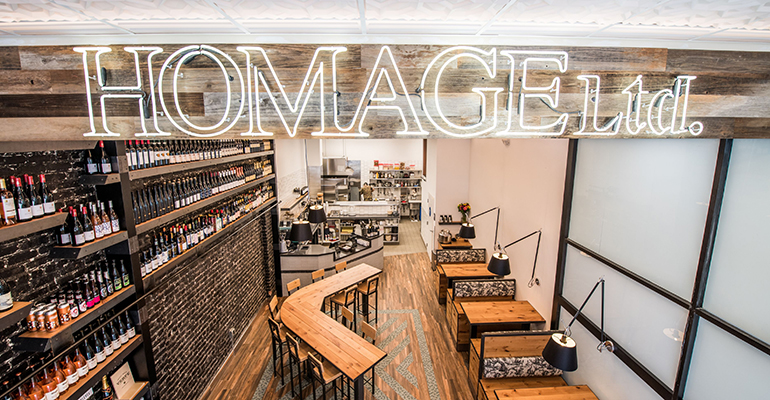 “Lunches are made a lot faster because everything is within arms’ reach,” Paoletti said. “At my other restaurant, we figured out that productivity slowed between 30-60 seconds per meal with longer counters.”

Blurring the line between workspace and lunch place

If people insist on eating at their desks, why not combine business with the pleasure of lunch? 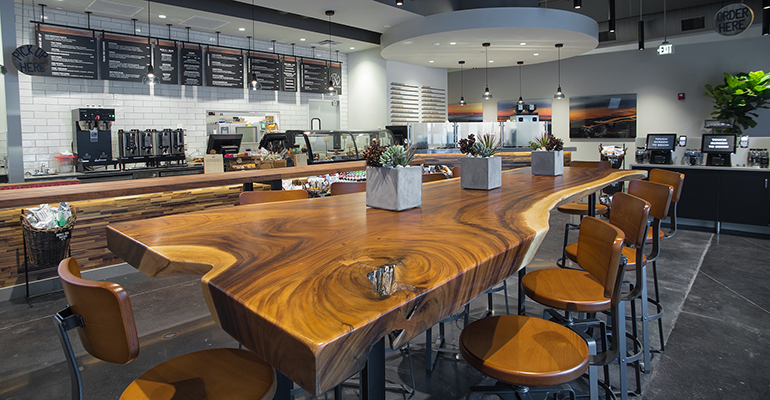 That’s the concept behind Colorado’s Graze & Gather which opened in February and serves as both a coworking space and a breakfast-and-lunch spot, offering salads, sandwiches, burgers and personal pizzas for an average entrée price of $8.50.

The 46-seat, 2,650-square-foot communal working space has free WiFi, plenty of outlets and “thoughtful lighting” to appeal to laptop-users. Graze & Gather also offers both mobile ordering through the Thrive app and grab-and-go options for people who don’t want to linger. 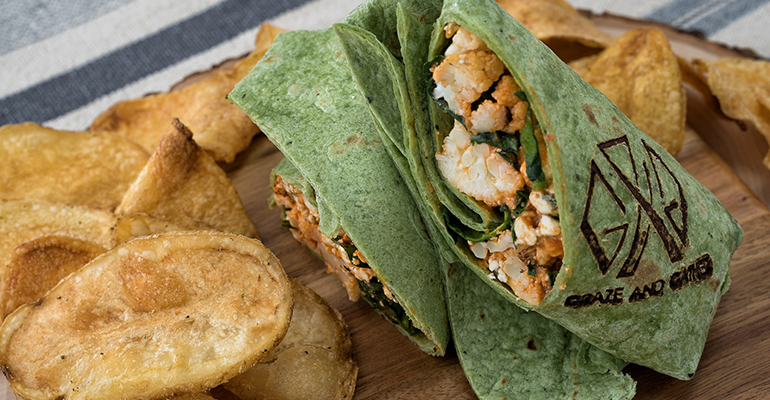 After being open for six months, Graze & Gather manager Rachel Stine said that for those who stay longer than a quick coffee break, the space has appealed in particular to people having lunch meetings or interviews.

“In an area that was greatly in need of a better food option, Graze & Gather allows workers to come together in a way that’s natural to the changing employment landscape while still being accessible,” Stine said, calling the concept a “unique community space” that is proving to have all-day appeal.

Bringing back the power lunch

The Commons Club in San Francisco has sought to remake the power lunch for the modern consumer. 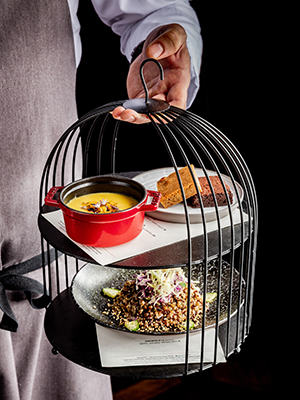 The 2,225-square-foot social club opened in February inside the Virgin Hotels San Francisco. Executive chef Adrian Garcia, formerly of the restaurants Benu and Quince, launched two power lunch specials in July. The cheekily named “The Quickie,” for example, for $25 includes a two-course lunch: soup, salad, or tostada to start, with three entrée options, including a grain bowl and flank steak. For an extra $15, the Quickie can be turned into an “Afternoon Affair” if customers add a cocktail and dessert.

“We found demand for an actual dining experience that’s executed in such a way that guests can be in and out in a time frame that fits their lifestyle,” said Jay Wetzel, vice president of food and beverage for Virgin Hotels. “Chef Garcia saw a consumer pain point and wanted to do something about it. Think about it — you’re going to a place to try to get a quick lunch, then you end up rushing through the experience due to timing, so it just ends up being a mediocre experience.”

Wetzel said the menu has been a hit so far. Customers often start “with the Quickie and then stay for the Afternoon Affair.”

Reformulating the menu for on-the-go diners

Patxi’s Pizza, based in San Francisco

When the 19-unit deep-dish pizza chain Patxi’s Pizza — recently acquired by Elite Restaurant Group — overhauled their menu and added a lunch menu for the first time, their biggest challenge was how to tweak their pizza offerings to appeal to daytime customers. 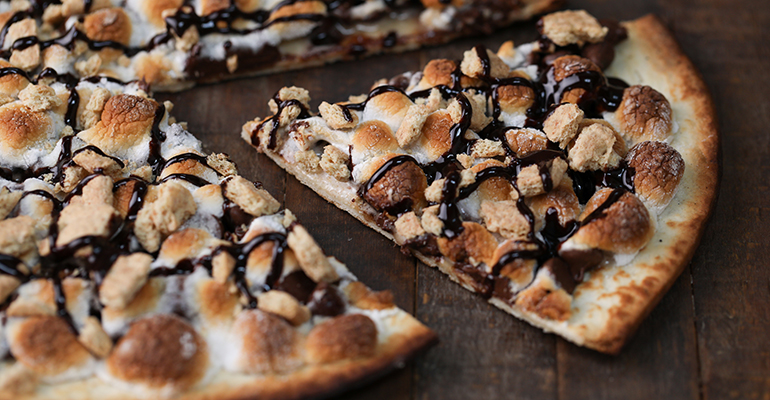 “A lot of our famous deep-dish offerings take 25 to 40 minutes to make, which is not conducive to someone on their lunch hour who wants fast, great-tasting fast food,” said David Eldredge, director of marketing at Elite Restaurant Group. “So, we compromised. We are featuring some deep-dish pizzas, some dessert pizzas, and we’re also spinning into sandwiches and soups. We really want to be more of a fast-casual environment during lunch hours.”

In addition to menu tweaking, Patxi’s also offers mobile ordering and delivery through DoorDash. Plus they have moved up the start of happy hour from the more typical 6 p.m. to 3 p.m., in order to improve the late afternoon daypart before dinner.

All of these tweaks were made without compromising the Patxi’s brand. Eldredge said it has been a balancing act to evolve their menu enough to appeal to on-the-go lunch customers, while still staying true to their roots. You’ll never see burgers and sushi on the menu at Patxi’s, he said.

“Deep-dish pizza is the core of our DNA but we’re experimenting with dishes in ways in which our guests give us permission to experiment,” Eldredge said.