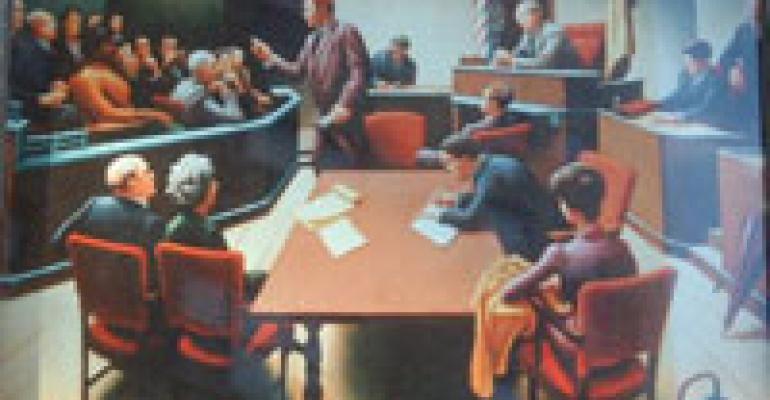 About Those Forward-Looking Statements…

Given the brutal casual dining operating environment they subsequently faced, we’re sure the top executives at 1,700-unit Darden Restaurants wish the timing of last August’s $1.19 billion purchase of LongHorn Steakhouse had been different. But you can’t expect them to foresee the future. Unless, that is, you work for Plumbers and Pipefitters Local 51 Pension Fund, which has unleashed an army of class-action lawyers on Darden alleging that its top executives misled investors about the company’s fortunes while making a bundle for themselves. The union wants a trial; read what happened and decide how you might vote if you get picked for the jury.

Management-wise, there’s a significant degree-of-difficulty involved when a full-service restaurant chain digests a huge acquisition in a time of soaring commodity costs and declining consumer demand. But it can be done. Check out the FY 2008 third quarter results released by Darden Restaurants on Mar. 18. The company’s earnings rose one percent ($.80 per share, versus $.79 in the prior year).

So-so numbers in ordinary times. But given the dismal economic climate in which they were achieved, they’re pretty darned good. Consider: Fewer people were dining out, those who did were looking to trade down, and the cost of many of the foodstuffs restaurants use—dairy, proteins, grains, cooking oil—went up, seemingly every week. Throw in the seasonal slowdown in customer traffic due to bad winter weather and Darden’s ability to keep the company’s head above water was, in retrospect, a triumph.

More impressively, Darden pulled it off despite declining same-store sales in four of its five concepts. The good news: Third-quarter FY 2008 sales rose 5.7 % at Olive Garden. The bad: Same store sales fell at Red Lobster (down 2%), LongHorn Steakhouse (down 3.3 percent); Capital Grille (off 2.2%) and Bahama Breeze (down 2.0%). Through it all, the company is still sailing along: profits are up, albeit slightly; there’s enough money in the till to pay an 18-cent per share quarterly dividend on May 1, 2008; and the share buyback program is still a go, as Darden bought back 3.8 million of its own shares in the third quarter. Many other restaurant chains wish they were doing as well.

All of which makes Darden a well-managed company by just about any definition—but not by the definition of the trustees who watch over the pension fund of the Plumbers and Pipefitters Local 51 of East Providence, RI. They’ve got a problem with how Darden did business in the first and second quarters of the company’s fiscal 2008—roughly June 19, 2007 through December 18, 2007. They’re alleging that during this period Darden’s top executives were involved “…in a fraudulent scheme and course of conduct which operated as a fraud or deceit on purchasers of Darden’s common stock by disseminating materially false and misleading statements and/or concealing material adverse facts. The scheme deceived the investing public regarding Darden’s business operations, management and intrinsic value of Darden’s securities; enabled certain company insiders to sell 427,933 shares of their personally-held Darden common stock for gross proceeds in excess of $18.5 million; and caused Plaintiff and members of the Class to purchase Darden’s common stock at artificially inflated prices.”

Fighting words indeed. You can read the rest of them in the 23-page complaint filed in the United States District Court for the Middle District of Florida, Orlando division, on March 14, 2008 by Coughlin, Stoia Geller Rudman & Robbins LLP. It’s a 190-lawyer firm with offices across the country, and its stock-in-trade is class action lawsuits on behalf of investors.

It’s not the only law firm hoping to cash in on the alleged Darden wrongs. Hartford, CN-based Schatz, Nobel Izard P.C. wants in on the action, too. This firm notes that the Darden execs “Issued materially false and misleading statements that misrepresented and failed to disclose that the company’s core restaurants, such as Olive Garden, Red Lobster and LongHorn, were underperforming and same-store sales were experiencing negative trends; that the company was experiencing rising food costs that were above internal expectations; and that as a result of the forgoing, the defendants had no reasonable basis for their positive statements about the company’s prospects and guidance for fiscal 2008.”

Also eager to join in any class action suit that gets going against Darden are Atlanta’s Holzer Holzer & Fistel, and Bensalem, PA’s Law Office of Howard G. Smith. When you get this many lawyers trying to drum up business, it gives you an idea about how much money might be at stake.

For the lawyers, that is. The Plumbers and Pipefitters Local 51 Pension Fund didn’t really take much of a hit. It bought 1,250 Darden shares on 9/10/2007 at $40.37, an outlay of $50,462. At RH enewsletter press time, those shares were worth $42,787, for a paper loss of $7,675. Or, roughly about what the loss would have been if the Plumbers and Pipefitters had put their money into a plain vanilla index fund that tracked the Standard and Poor’s 500—the preferred investment vehicle of pensions funds nationwide—instead of Darden stock.

The complaint asks for a jury trial, but that’s not the game the law firms are playing. They want to aggregate a number large of individual claims like that of the Plumbers and Pipefitters into one big class action suit. From there, the idea is to negotiate a settlement with the defendant that would be less costly than if that defendant were to go to trial. In such settlements, the attorneys typically collect massive fees; class action members, on the other hand often get a pittance or, in some cases, coupons.

But we hope there is a trial in this case. We’d like to hear the plaintiffs make the case that the Darden executives knew that business was going to be bad last fall, that the holiday season—usually the most lucrative time of the year for full-service restaurants—wouldn’t help the numbers much either, and that food prices were going to start climbing and not stop. If the what-did-they-know-and-when-did-they-know-it factor is the issue, it’s hard to argue that the Darden people knew any more than any other operator, all of whom were probably hoping business would bounce back and food costs would stabilize during every single week of this period.

As for Darden employees getting rich by cashing in their stock options during the disputed period, that’s exactly what took place. But the eight people who cashed in their options weren’t the top dogs of Darden. Chairman/c.e.o. Clarence Otis, president/c.o.o. Andrew Madsen and senior v.p./c.f.o. Brad Richmond weren’t involved. Which is to say, the guys giving out the information about the company to investors weren’t the ones who would have benefited if that information had actually been misleading.

Hey lawyers: Face it; no one saw the casual dining slowdown coming. If the Darden executives knew all this was going to happen, they wouldn’t have bought LongHorn when they did. They would have waited until later, when the price would have probably dropped.

Good luck worming a big settlement out of Darden on this one.