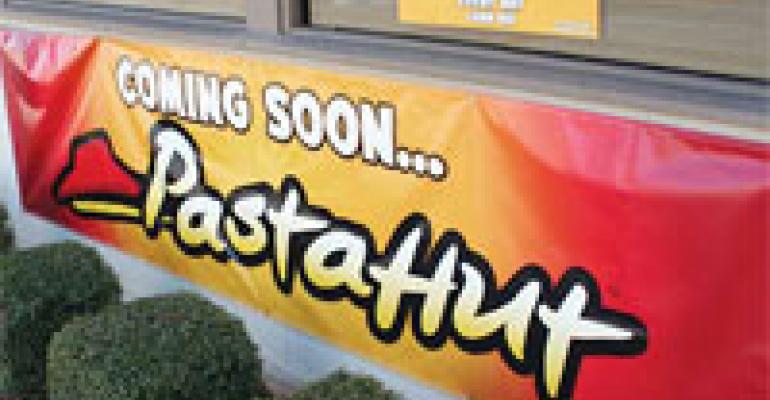 Many restaurant marketing campaigns strive to create long-lasting buzz on the Internet and elsewhere, but Pizza Hut may be the first company to create so much buzz inadvertently.

Last month, the 6,200-unit pizza chain launched a tongue-in-cheek public relations and ad blitz carefully timed to reveal that it was rebranding itself as Pasta Hut. The idea was to generate interest in Pizza Hut's new Tuscani pasta offerings available in either Creamy Chicken Alfredo or Meaty Marinara varieties. Priced at $11.99 per three-pound tub, they're available via delivery nationwide.

Pizza Hut alerted the mainstream media via releases on PR Newswire-not normally a source for fake news. Both the story and the hi-res images that accompanied it via the Newscom service were disseminated — without disclaimers — on March 31. Many media outlets, including CNBC, ran it straight. Why not? It seemed legit.

On April Fool's Day the company continued the ruse with a full-page ad in USA Today. The paper ran a long (for USA Today) story which sidestepped around the “rebranding” issue while still getting the PR campaign's main points out. There were also 15 second TV spots, a website called www.newpastahut.com, in-store signage and a “Pasta Hut” sign plastered on the company's Dallas headquarters.

Not everyone figured it out. Some felt business was so lousy in the pizza segment that a Pizza Hut rebranding made strategic sense. Others noted that Pizza Hut had filed for trademark protection of “Pasta Hut” way back on Jan, 10, 2008. Why trademark a joke?

The fakeout campaign was realistic enough to confuse a lot of people, and their collective bewilderment as expressed on the Internet kept interest in the Tuscani pasta offerings and Pizza Hut's name alive a lot longer than a traditional media campaign could have. But will all the extra buzz translate into more pasta sales? We'll find out when corporate parent Yum! Brands reports sales for the April-June quarter. Our bet: This campaign will be a success.