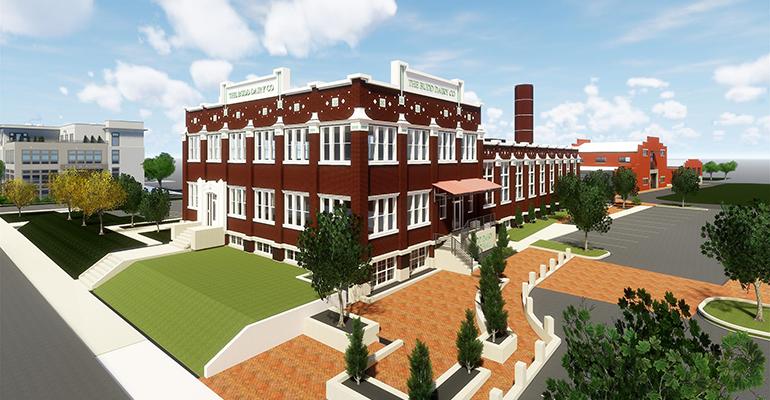 The Budd Dairy Food Hall is named for the historic 14,000-square-foot building in the Italian Village community near downtown Columbus.

Set to open this winter, the food hall will license spaces to between eight and 10 concepts with the goal of becoming a community asset, supporting the growth and development of restaurant startups, like food trucks or home-based food businesses or seasoned restaurant operators looking to try out a new concept, the company said.

The food hall trend has been booming around the country, though models vary.

In this case, CMR is developing the space in partnership with

veteran local developer Kevin Lykens, who is overseeing the construction and renovation of the Budd Dairy Food Hall.

On the first level of the hall, which is about 11,000-square feet, will be a main bar, community seating and the food vendors. A stage on the main level will be used for live performances, DJs and other local artists.

A second floor will focus more on entertainment with a smaller bar, interactive games and private meeting and event space, to be catered by the hall’s vendors. In season, a rooftop deck will offer additional space and a bar. The goal is to incubate and nurture new entrepreneurs. Businesses like these “can secure space in the food hall with low overhead and immediately engage with a diverse audience of local food adventurers,” said Steve Weis, CMR vice president of development, in a statement.

Mitchell called the project exciting, saying it will bring him back to his roots in the restaurant business, something he has craved as CMR celebrates its 25th anniversary this year.

With 15 restaurant concepts across the country, including the 14-unit Ocean Prime chain, CMR served 2.5 million guests during a busy 2017, and closed out the year by hosting a dinner at the James Beard House.

“Central Ohio embraced me as a young restaurant entrepreneur and gave incredible support to the growth of our company and our associates,” Mitchell said, in a statement. The food hall “will position other new restaurants to realize their potential, which allows me to pay the generosity from our community forward to a new generation of entrepreneurs.”

The call for entrepreneurs with a food business or even just a business idea went out into the community, and so far, more than ten serious applications have come in, according to CMR.

Once the different concepts are in place, CMR will provide day-to-day management and related services for the food hall’s culinary, entertainment and beverage programs.