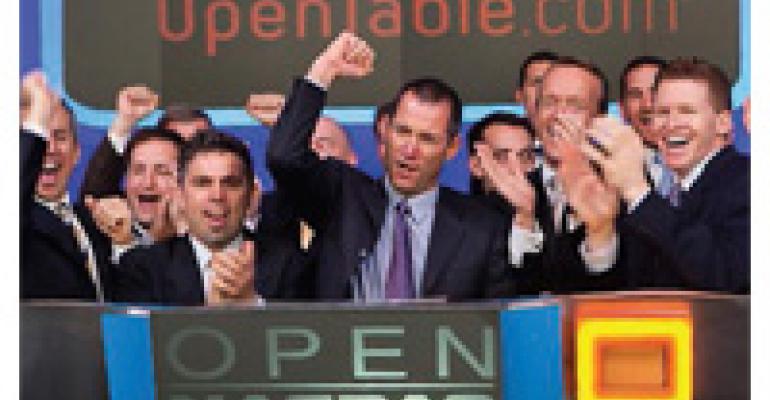 So, Everybody Loves OpenTable. Do You?

Traders on Wall Street have gone wild over online restaurant reservation system OpenTable, rewarding it with a price/earnings ratio as high as 130. That's the kind of valuation you'd expect to see for a company that has discovered a cure for cancer, not one that enables people to book a seat at, say, Buca di Beppo or one of the many other restaurants in its network.

While OpenTable seems to work well for most full-service restaurants that participate, a few operators have begun to question whether the benefits are worth the cost.

To be sure, not all operators are doing the questioning. At Restaurant Hospitality's just-concluded New Directions Conference in Chicago, industry superstars Paul Bartolotto and Drew Nieporent went out of their way to praise OpenTable. Nieporent said he held out against installing OpenTable in his legendary restaurants for a long time, but loves it now.

You can't get a stronger endorsement than these two guys gave. But not everyone in the industry shares their sentiment.

Mark Pastore, partner in San Francisco standout Incanto with chef Chris Cosentino, is one of them. He wrote a thoughtful piece on the subject that appeared in the San Francisco Chronicle's online food blog.

Here's Pastore's take on OpenTable's sky-high market valuation. “That translates to more than $100,000 for each contract it holds with the approximately 14,000 restaurants listed on OpenTable.com. Sadly, many small neighborhood restaurants may themselves not be worth as much as the value that has been placed on their business with OpenTable.” Touché.

He also cites an unnamed three-and-a-half star San Francisco restaurant whose owner cuts a check to OpenTable each month that is larger than what he personally makes, despite spending 80 hours per week on the job. This operator keeps the service because he feels his customers “would revolt” if he dropped it.

The customer database is another issue. OpenTable maintains it, so a restaurant's customers wind up having a relationship with OpenTable, not the restaurant. Pastore laments that “by permitting a third party to own and control access to the customer database, restaurants have unwittingly paid while giving away one of the crown jewels of their business, their customers.”

Is it worth it? OpenTable says its system pays for itself, because restaurants using it fill an average of at least 300 seats each month and that operators need only fill 12 incremental seats each month to cover the cost of offering the service.

Pastore counters that OpenTable's math assumes that a large number of reservations booked by OpenTable are incremental, generously defined as “guests who would not have otherwise visited the restaurant and were seated at a table that would otherwise have sat empty for the evening.” Maybe, he says, they would have found the restaurant some other way. He also notes that being part of OpenTable was once a competitive advantage. But now that so many restaurants have signed up, that's no longer so.

If you're wondering why Wall Street traders have bid OpenTable so high, consider this line from Pastore. “We live in the Golden Age of Google, in which web-based services have transformed many consumer and business functions by making them easier, more accessible and drastically less expensive,” he says. “That's ultimately the most perplexing thing about OpenTable: unlike so many other web services, this one has actually driven up operating costs, not reduced them.”

Incanto isn't a member of OpenTable and isn't likely to become one. We don't know if you should join or not. But keep an eye on its stock price; indirectly, it says a lot about where the industry is going.