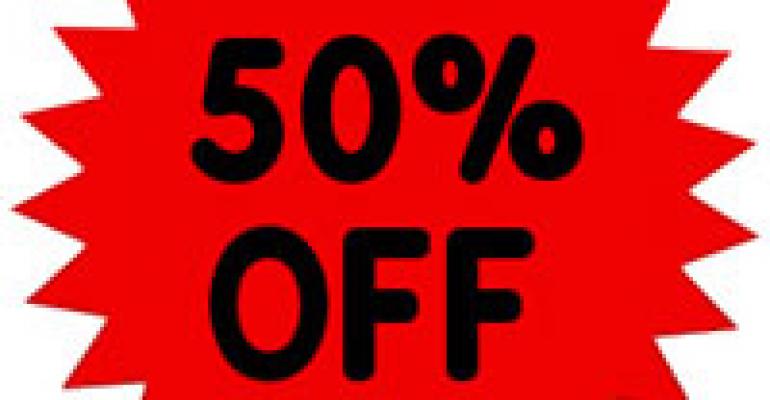 Top restaurant industry researchers set out to assess whether daily deal fatigue exists, but also found out a lot about who uses these deals and why. The key finding from the restaurant operator perspective: You may not have to offer as deep a discount as you think to run a successful deal.

Authors Utpal Dholakia, a professor at Rice University, and Cornell’s Sheryl Kimes chose an ambitious title for their joint research study: “Daily Deal Fatigue or Unabated Enthusiasm? A Study of Consumer Perceptions of Daily Deal Promotions” (download at http://papers.ssrn.com/sol3/papers.cfm?abstract_id=1925865). The first problem they had to overcome was putting their research sample together.

Dholakia and Kimes estimate that only 16 percent of Americans use deals. Which may be why their staffers had to contact 3,933 prospective panel members to come up with enough adult American daily deal users (655) to balance their sample with the much-easier-to find nonusers. Demographically, however, their methodology produced a diverse, broad-based respondent sample.

The researchers’ boldfaced conclusion on deal fatigue read like this. “If anything, the results indicate the opposite: shoppers who have purchased daily deals to a greater extent in the past continue to remain enthusiastic about such deals to a significant and broad-based degree.”

The takeaway for restaurant operators: There’s a heck of a lot more unabated enthusiasm for daily deals in the marketplace right now than there is daily deal fatigue. So it’s not too late to break into the daily deal game if you’re not already in it. And if you’ve used daily deals already and received a positive result, keep doing so.

The authors also came up with a daily deal shopper profile that lists these attributes:

• Younger, higher income, and live in urban or suburban areas.

• Have little interest in being seen as different or “fringe” in their shopping patterns.

• Not very careful with personal finances, and do not think about spending issues all the time.

• Interested in trying new products or services so as to have new experiences to talk about and influence others.

• Attracted to a deal because it is a deal, and likely to be less sensitive to the actual terms of the offer made by the merchant.

That last finding matters to restaurant operators. The researchers are saying that huge discounts may not be the key drivers of deal acceptance.

“The pleasure of getting a deal outweighs the specific depth of the discount received,” Dholakia and Kimes write. “In fact, nowhere in our results do we find a widespread and firm insistence on getting deep discounts among daily deal shoppers.

“Perhaps now is the time for the daily deal industry—both site operators and merchants—to turn their attention away from offering deeper and deeper discounts and making blanket offers which bruise the merchant more often than not, to more creative and subtle ways of making offers that appeal to consumers and benefit merchants alike.”

It’s worth noting these two researchers end their work by calling for a more enlightened structuring and use of daily deals as a way to “prevent the prognostications of the industry’s demise from coming true.” We don’t know if daily deals make sense for your restaurant or not, but the authors seem to be telling us to get ready for big changes in the daily deal universe soon.