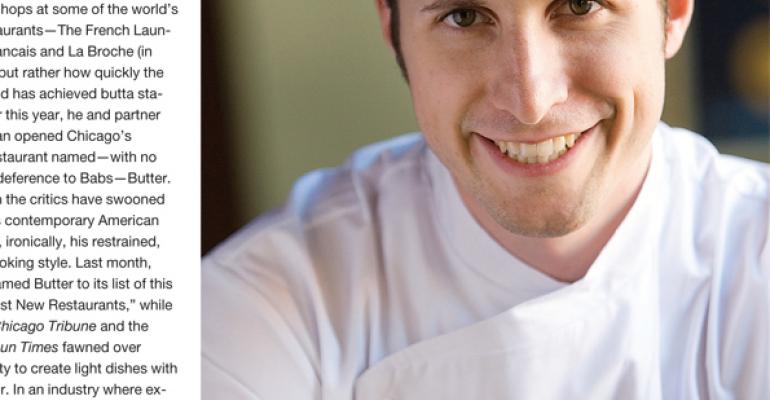 Don't know if Barbra Streisand has been to Chicago to sup at the table of Chef Ryan Poli, but we're betting that she'd declare he cooks "like butta." In pop culture circles, it doesn't get much better than that. With that said, we issue a second-best declaration that Poli is a Rising Star. Not because he developed his chops at some of the world's great restaurants—The French Laundry, Le Francais and La Broche (in Madrid)—but rather how quickly the 28-year-old has achieved butta status. Earlier this year, he and partner Jason Chan opened Chicago's hottest restaurant named—with no apparent deference to Babs—Butter. Since then the critics have swooned over Poli's contemporary American menu and, ironically, his restrained, mature cooking style. Last month, Esquire named Butter to its list of this year's "Best New Restaurants," while both the Chicago Tribune and the Chicago Sun Times fawned over Poli's ability to create light dishes with huge flavor. In an industry where excesses are often celebrated, it's refreshing to find a young chef who hasn't bought into the old adage that "The road to excess leads to the palace of wisdom."