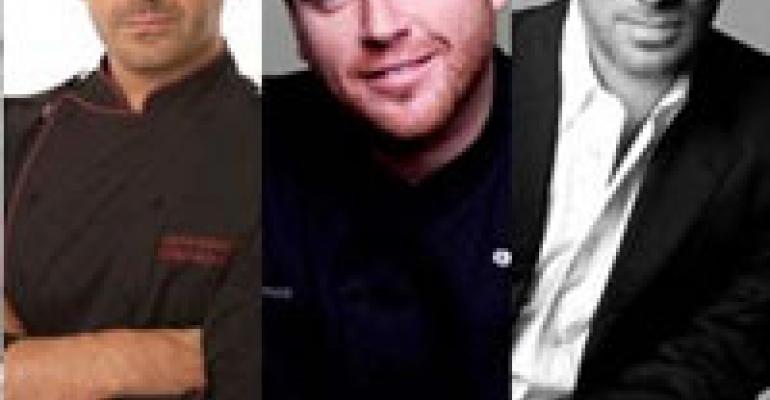 More Chefs On TV? Come On Down!

How important is it that a restaurant’s chef steps out of the kitchen and chases celebrity status? Sure, it’s a good career move for the chef, but it’s an even better strategy to keep your dining room full. Where to start? Get on TV, pronto.

The recently concluded South Beach Wine & Food Festival is all about rubbing elbows with celebrity chefs. This year, three of the most successful ones were part of a panel that tackled this topic: “How To Build Your Brand Without Selling Out.”

Their specific focus: “Television shows, endorsements, appearances, product lines, books, you name it! A successful chef’s career is no longer defined by only his or her work in the kitchen. The challenge, however, is maintaining one’s credibility while taking advantage of these new opportunities and revenue streams.”

There was plenty of talk about how and why to build a personal brand, but none of the star chefs on hand felt they had they had lost credibility, let alone sold out. Here’s what a few of the panelists had to say.

The career of John DeLucie, now the chef/owner of The Lion in New York City and The Royal in Miami Beach, really took off while he was chef at New York City’s Waverly Inn, where his partner was Vanity Fair editor Graydon Carter.

DeLucie’s media activities include the requisite TV appearances, but also authorship of a well-reviewed book (The Hunger: A Memoir of an Accidental Chef), a recurring gig as MTV’s Celebrity Chef at its Movie Awards event, and a weekly lifestyle radio show, Cooked!, on satellite radio provider Sirius XM.

Which of these media activities carries the most weight?

And might all the media exposure undermine his credibility as a chef? DeLucie isn’t as sensitive on this score as he was earlier in his career. “At this point my restaurant is a lifestyle thing, it’s not exactly a gastronomic endeavor for me,” he explained. “It’s a place where people go and have fun and have a good time. Ten years ago I never would have said that or admitted that or wanted that for myself.”

“I can speak first-hand on this as my restaurant went from kind of busy to fully booked, week by week, with the Iron Chef America airings,” he said. “Is that selling out? All I did was sell out my restaurant. The food hasn’t changed, but I just watched it happen. I don’t think there’s any reason to avoid it. Everyone’s that’s up here (on this panel) is still themself. Just because there’s a TV camera on doesn’t mean you’re someone else.”

Scott Conant’s restaurant empire includes his top-rated Scarpetta operations in New York City, Miami Beach, Toronto, Las Vegas and Beverly Hills, plus the more casual D.O.C.G. concept at the new Cosmopolitan in Las Vegas. He has stayed away from TV cooking competitions, instead appearing as a judge on Chopped! and Top Chef plus occasional stints as a pitchman on the Home Shopping Network, where he hawks his signature line of pots and pans. Conant wasn’t defensive at all about simultaneously operating multiple restaurants spread across two countries.

“I tried to be that person that stays in the kitchen all the time and focuses on the customer,” Conant said. “I tried that, it just didn’t work for me.”

What did work for him was media exposure.

“I look at TV shows on the Food Network as an advertising platform to get people to the restaurant,” he says. “I look at television appearances as something to fill the blanks in the reservation book. And it seems to work.”

It definitely works for Conant and his fellow panelists. But what about others who want to follow this path? Chef-driven TV food shows may be reaching a saturation point. Are there any other options?

“I think television is the most relevant platform now,” Conant said. “Who knows what’s going to happen with the internet? No one’s done much of anything on the internet with cooking and food yet, as far as I know, aside from blogs.”

So aspiring chefs, there you have it. If you want to be a little famous and keep your restaurant full, try television. If you want to break through the clutter that’s building up in that medium, see if you can get something clever going on the internet. Do it right and someday you’ll be able to expound on the concept of “selling out” like these standout chefs did in South Beach.