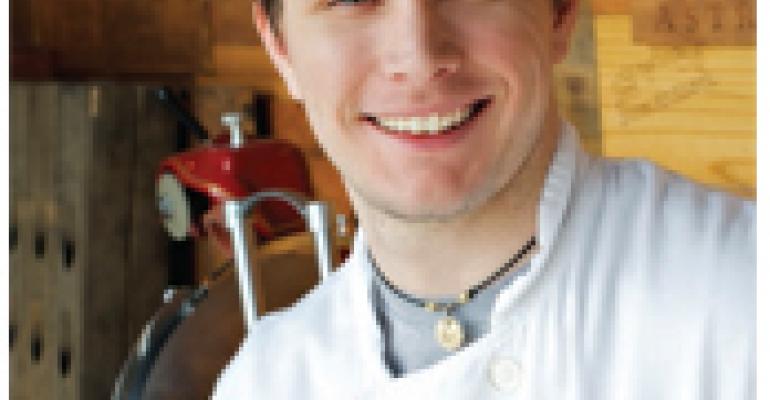 Who doesn't like a big fancy meal every once in a while? But most of us, including chefs, often crave earthy comfort foods that simply make us happy. We asked Jeff Michaud, the executive chef of Osteria and Amis restaurants in Philadelphia, what makes him happy and, without hesitation, he said the rabbit stew his wife's grandmother cooked for them every Sunday when the couple lived in Bergamo, Italy. “She would cook it over a wood stove with the polenta pot right in the fire,” he said. “At 83 she was still raising and butchering rabbits. I now use her recipe at my restaurants. I love it.”

Method: To cook, place the butter, sage, rosemary and pancetta in large rondo (or roasting pan) and place over high heat until butter is browned and the pancetta has rendered. Season the rabbit well with salt and pepper and add to the pan. Spread the rabbit evenly across the bottom of the pan and leave it alone for 5-7 minutes until it has browned slightly.

Stir the rabbit, scrapping the bottom to remove some fond (browned, caramelized bits) and allow the rabbit to cook until it has achieved an even coloration on all sides. If the pan appears to be getting too dark, deglaze with a little white wine and scrape the fond up. Then further reduce down so that browning can continue. Doing this will help you to achieve a darker sauce as the sugars from the wine will caramelize after the liquid has evaporated.

Once an even color has been achieved, deglaze with a sufficient amount of white wine. Scrape all the fond from the bottom of the pan to add a nice dark color to the sauce. Next add enough water to cover the rabbit ¾ of the way. Cover the pan securely and place over a low flame. Allow the rabbit to cook 45 minutes to 1½ hours or until the rabbit is very tender (it should be nearly falling off the bone, but not falling off the bone at all). Transfer the rabbit to a hotel pan and cover with plastic wrap to keep the moisture in.

To prepare for service, place 1 leg, 1 rib, 1 loin, 1 additional chunk of rabbit and enough sauce to cover almost halfway in a sauté pan. Place over a high flame and allow the rabbit to cook until the meat is heated through and the sauce is reduced to a dark glaze. Toss the rabbit gently in the sauce. Put a large spoonful of polenta in the center of a large crock. Arrange the rabbit with the chunks on the bottom and the rib and leg leaning against them.