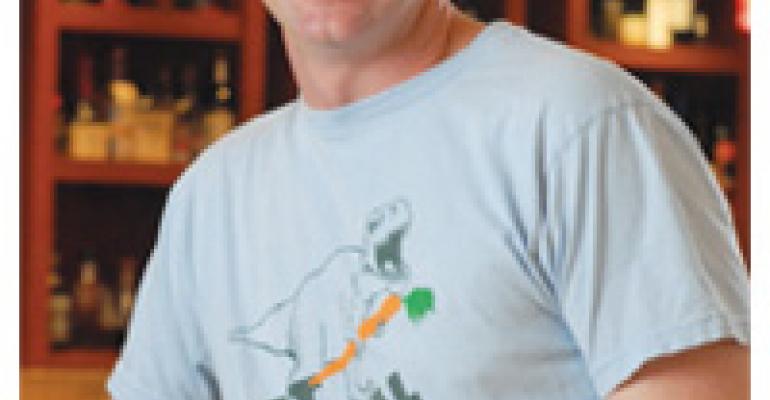 How do you lure restaurant customers to an airport Marriott in a dismal part of town? You hire an executive chef named Ellis Cooley to perform miracles, which is exactly what he's done at AMP150 in Cleveland. Local foodies — most of whom would never be caught dead on this stretch of no-man's land — are now competing for seats with hotel guests to eat Cooley's spot-on modern American fare. If city officials were smart, they'd rename the area Cooleyville and make him the mayor. He's done far more for urban development here than they have.

While he may be at a Marriott — and one associated with an airport to boot — there's nothing corporate about Cooley's cooking style and menu. He's a strong supporter of local farmers and purveyors and backs up his farm-to-table commitment with beehives and a quarter-acre garden behind the hotel. Yet, he never forgets that his location requires him to work harder than most, which explains why the frequently changing menu is priced to entice (nothing higher than $19, with many items falling under the $10 mark).

Cooley is an Atlanta native who cooked in South Florida, Spain, France and Austria before settling in New York to cook at top-notch hotels. And now here in Cleveland, he's revised his focus to cater to Midwestern tastes. Consider, for example, some “small bites” options such as biscuits & gravy (with veal short rib and black truffle gravy) and house-made mushroom pappardelle (with braised pork, Killbuck Valley mushrooms and Gruyere). A recent “larger bites” portion of the menu showcased braised lamb (with couscous and a pickled celery root/apple salad), and sautéed Arctic Char (with savoy cabbage, Benton's bacon and parsnip puree).

As you might expect, Cooley's menu maintains a strong garden focus, featuring at least 10 items that would appeal to vegetarians or anyone else. Only hard-core meatheads would feel deprived eating his roasted cauliflower with goat cheese, pine nuts and beet vinaigrette. What you don't expect is an hour wait for a seat at a restaurant airport hotel. Miracles do happen.