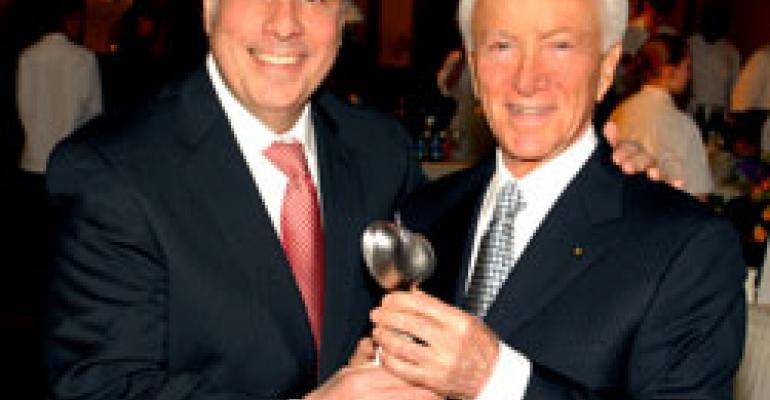 Chef and restaurateur Michael Lomonaco, of Porter House and formerly of 21 Club and Windows on the World, was recently honored for his longtime commitment to Careers through Culinary Arts Program, C-CAP, at an annual fundraiser held in New York City. The charity event supported scholarship and enrichment programs offered by C-CAP.

Lomonaco, shown at right, has mentored hundreds of aspiring culinarians during his career. He’s done so both before and after the 9/11 terrorist attacks that leveled the World Trade Center, killing 72 of the employees who worked for him at Windows on the World. That he had stopped to get his eyeglasses adjusted just before going to work on the 106th floor of the North Tower that morning allowed Lomonaco to escape near-certain death.

In a passionate acceptance speech Lomonaco thanked C-CAP for supporting culinary students. He said the organization “invented the cooking competition,” which they use to help choose scholarship winners. Since 1990, C-CAP has awarded high school students $31 million in scholarships, and donated $2.5 million worth of supplies and equipment to classrooms, according to the organization.

“The walk-around tasting event raises funds to support C-CAP’s mission to provide underserved high school students with training, scholarships, and jobs in the restaurant and foodservice industry,” said Richard Grausman, founder and president of the 21-year-old non-profit Careers through Culinary Arts Program. “C-CAP has worked with over 200 culinary teachers, 200,000 high school students whom they’ve taught, and 2,000 C-CAP scholarship winners who went to college. We’re proud that more and more qualified students are going into the industry.”

New York City C-CAP high school culinary students assisted the close to 40 of New York’s chefs who prepared and served their culinary creations to 600 attending guests. Patrons paid between $500 and $1,000 to attend the event, which the organizers said made more than $550,000.

FULL SERVICE MAKES A COMEBACK. REALLY.
MORE CHEFS ON TV? COME ON DOWN!