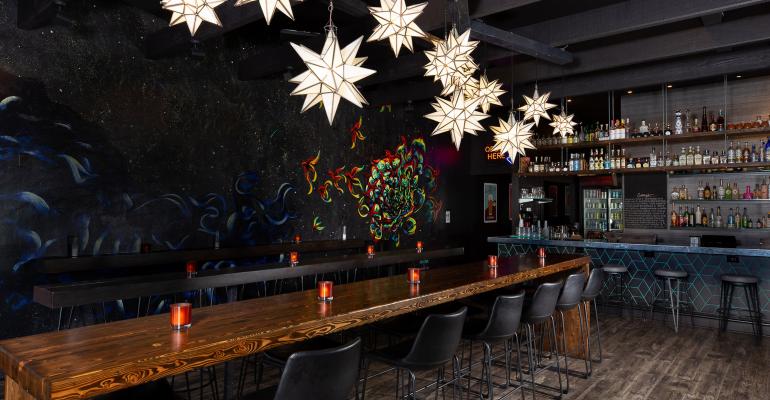 Reeves is an accidental multi-concept operator in Prescott, Ariz.

You could call Skyler Reeves the accidental multi-concept operator.

He didn’t really set out to build a rapidly expanding restaurant group in Prescott, Ariz., but that’s exactly what happened as Reeves followed opportunities he just couldn’t let pass him by.

He had spent years working in Los Angeles with big restaurant and nightclub operators like Sam Nazarian at SBE and Cedd Moses at 213 Nightlife. Then Reeves became a parent and decided to move closer to family, so he relocated to Prescott, a town in North Central Arizona that was hungry for new concepts.

First came The Barley Hound, a casual gastropub Reeves created and launched in 2015 that was the first of its kind in the area. With duck fat fries and shishito peppers on the menu, he designed a place where he would like to go have a bite and a drink.

“In this smaller market, people were so thrilled to have this kind of offering, and I think the other operators maybe underestimated the market and had offered a kind of low-rent product, to be blunt,” he said. “I was bartending and talking to people every day. I knew there would be a good market for it.”

“I didn’t set out to buy other restaurants, it wasn’t originally part of the business plan. But I loved this restaurant and it was a successful business, it made good business sense,” said Reeves. “I could totally see myself owning it.”

That deal closed in 2018, and Reeves said it poured fuel on the fire for growth. “When you go from one restaurant to two, it’s only one more restaurant but you’re doubling your company,” he said. “That was the hardest one in a way.”

There were the challenges of setting up the infrastructure of paying bills, for example, and the back end of hiring and firing. “It’s a big, busy restaurant,” he said. “So it changes everything. It changes your buying power. It changes your income. It was a big difference.”

In 2020, another deal came his way: an event space in a fabulous location overlooking the town’s central strip — though on a second floor. In late 2020 — amid the pandemic and despite construction delays and terrifying “what if” scenarios — Reeves launched the three-daypart concept The County Seat, a counter-service restaurant with healthful food and a full bar. “The inspiration was an Urth Caffé-meets-Butcher’s Daughter kind of vibe,” he said, referencing two Los Angeles concepts.

Earlier in 2020, Reeves also acquired another concept: the 50-plus-year-old Taco Don’s, a charming and beloved Mexican restaurant with a drive thru that helped keep the group afloat during the lean months of COVID shutdown.

Then in early 2021, Reeves added another concept: La Planchada, a tequila and taco bar with a huge beverage selection. And a second location for Rosa’s opened in September in nearby Prescott Valley, a location that he says is “going gangbusters.” More are planned.

With Vivili’s growth has come the challenge of finding staffing. Earlier in the pandemic, Reeves was in the news blaming the labor shortage on the generous unemployment benefits that he felt kept people from returning to work. The company developed a program offering free community college tuition to attract workers.

But now that those extended unemployment benefits are gone, Reeves said he has not seen any real increase in applicants. “I’m going to say I was super frickin’ wrong about that,” he said.

Now the company is focusing on promoting its culture rather than wages and benefits, though Vivili pays well and the offer of tuition did help, he said.