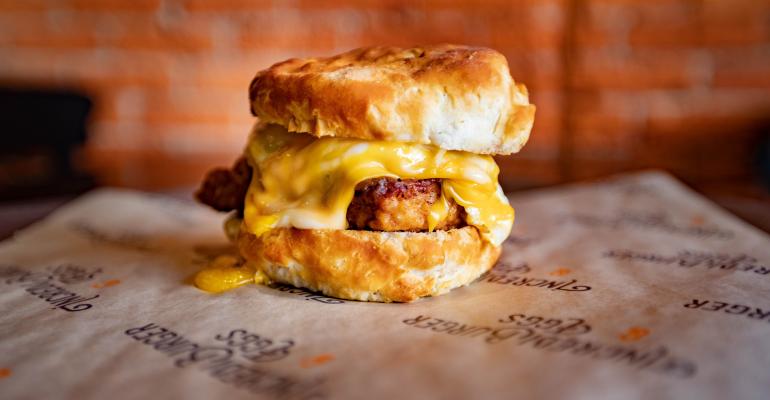 The interior Northwest — eastern Washington state and Idaho — has not been known as a culinary hotbed, but Adam Hegsted is doing his best to remedy that with his Eat Good Group, which now has six restaurants, a bakery and commissary, a catering company and media firm, among other businesses. He’s also planning to go into retail.

A native of Spokane, Wash., Hegsted went to culinary school there and in Seattle, worked at restaurants in Seattle and Los Angeles and then came home to open a restaurant in 2008 as the global economy was collapsing, “which didn’t end up that great,” he said.

Once that restaurant closed, he became the chef and then food and beverage director of a large casino in Idaho, working closely with the CEO and chief financial officer to make the F&B operations there profitable.

With that experience under his belt, he opened Eat Good Café in 2013 in Liberty Lake, Wash., and until the pandemic was opening roughly one restaurant a year ever since.

“As I grew as a chef, I gathered some other like-minded chefs and we all started doing our own independent style,” he said. “[We were] trying some things out that were maybe not so traditional, which is what you see in other big cities where chefs are taking chances and opening restaurants.”

All of the restaurants are supplied by the Doughlicious Bakery, in the original Eat Good Café space, which also acts as the group’s commissary, where bread is baked and the group’s cheeses, pickles, kimchi, sauces and more are also made.

Hegsted also has invested in Kinetek, a local media company of which Eat Good was the main customer anyway.

“It’s like having your own in-house marketing team,” he said.

Hegsted also works with local producers, so the tater-tot casserole at Gilded Unicorn is made with wagyu beef from nearby Snake River Farms, and of course the potatoes are from Idaho.

The pandemic meant Hegsted had to lay off a lot of staff, but now business is better than ever, with takeout and delivery accounting for between 5% and 15% of the business, compared to 2-3% beforehand.

“Really, our business practices changed a lot,” Hegsted said. “We were able to reset all the things we're doing and make some more substantial changes for the good for long haul. We trimmed a lot of fat and figured out how to break even when our revenues were down 50% or 75%, and so we’ve hung onto those business practices even as business continues to come back.”

He’s still short on labor, as most restaurants are, and Hegsted says other operators in the area have shut down for a couple of days each week, which can lead to confusion for guests. “But I challenged our team to kind of figure out how to do it with less people, and so that's what we did, which inherently helps our labor costs, and then we could pay people a little bit more.”

He also has streamlined the off-premises menus, limiting them to food that travels well and that can be made efficiently even when the dining rooms are full.

Now Hegsted is planning on building out Doughlicious (the commissary is at capacity at the moment), opening a retail bakery spot there and distributing to local grocery stores.

“I really love living here and being part of the community,” he said.