Dow segued from the front of the house to the back, first as a server and bartender during college, then ditching her graphic arts career to focus full-time on food, enrolling in the culinary program at Kendall College. After that she wound up learning from some of Chicago’s big dogs, including Ryan Poli at Perennial Virant, Mike Sheerin and David Posey at Blackbird, Jeff Pikus at Maude’s Liquor Bar and Koren Grieveson at Avec, where she ascended to sous chef. Last year she was tapped to open The Betty, a neighborhood tavern where her self-described “Modern Grandma” style of elevated classics has captured imaginations.

Whiting’s 492 was one of Charleston’s most buzzed-about openings of 2015. His fluid, seasonally influenced menu stresses his love for vegetables. He also prizes heirloom grains and uses a variety from local mills as well as occasionally grinding them in house to create an inspired dishes like burnt whole wheat tonnarelli pasta. Whiting is an avid cookbook collector and honed his own technique at some of the world’s premier restaurants, including the Inn at Little Washington in Virginia, Le Bernardin and ABC Kitchen in NYC and Da Vittorio in Bergamo, Italy.

A genius with desserts (Food & Wine named her a Best New Pastry Chef in 2013), Jordan didn’t want to be typecast, so she grabbed control of her career and steered toward the savory side of the business, reviving the iconic Johnny’s Grill and the Flower Shop Bar in Chicago’s Logan Square. She updated the diner’s lunch-counter heritage with a chef-driven twist, creating Irish-inspired breakfast, lunch and dinner classics made with fresh local ingredients. And no, she did not forget the desserts, which include house-made pop-tarts, donuts, breakfast pies, muffins and diner-style sweets.

De Leon has rubbed elbows with some of the best in the business. He spent a fair amount of time in Chicago at Grant Achatz’s famed Alinea and wound up as sous chef at Next when it won a James Beard Award for Best New Restaurant. He also staged under Rene Redzepi at Copenhagen’s famed Noma and Joan Roca at el Celler de Can Roca in Girona, Spain. We can’t wait, given the kind of exposure he’s had to some of the world’s great chefs, to see how he handles his latest gig, reinventing classic French fine dining in Nashville.

Like many chefs, the seed for Brendan Joy’s food career was planted by his grandmother. “I would take trips to visit my grandmother. Waking up there and watching her cook everything from scratch was fascinating, and I always wanted to know more,” he recalls. Know more he does, thanks to a degree from the Culinary Institute of America and stages with top chefs across the U.S., including Jonathan Benno at Lincoln Ristorante in NYC and Matt Accarrino at SPQR in San Francisco. Hired by Bondir Cambridge chef/owner Jason Bond, Joy has brought new energy to the restaurant through his twin obsessions with the best-quality ingredients and Italian-influenced cooking.

Seattle multi-concept operator Steven Han (Momiji, Uni Sake House, Kushibar) said he was looking for “a badass chef” with no Korean cooking experience who was “young and eager” to open his latest project, a high-profile Korean steak house. He wound up with Kirksey, a veteran of Seattle’s Tavolata and San Francisco’s celebrated Flour + Water, both Italian concepts. No problem: Han shipped Kirksey off to Korea for a crash course in the culture and the cuisine, and Kirksey has grabbed the ball and run with it.

Erickson is wearing some big shoes for a 24-year-old. She’s the creative spark behind the Michelin-starred restaurant’s desserts and quirky treats, including frozen s’mores, sous-vide cookie dough and PB&J meringues. She’s known for tucking unexpected ingredients into her recipes, such as financiers with miso and cajeta, figs with brown rice and a mulberry dessert with coco nib, foie gras and buckwheat. She also draws inspiration from her Japanese-American heritage for inventions like a White Sesame Tofu with Green Melon, Sake Lees and Rose Geranium, a riff on the traditional goma dofu.

It only took Johnson a year to earn the sous chef spot at Josiah Citrin’s acclaimed Melisse, so it made perfect sense that Citrin tapped Johnson to take the reins at the buzzed-about Charcoal, the casual live-fire concept that premiered last fall. There he presides over the family-style menu prepared in a wood oven, over charcoal, in coals or in a Big Green Egg. Johnson also created the staff aprons at the new spot, products from his own Cork District line of hand-designed aprons.

Few, if any, restaurant groups can boast about having their own miller, but Marc Vetri doesn’t head up just any restaurant group. McWilliams is overseeing the revolutionary Vetri Grain Program, setting up an in-house milling facility, creating guidelines and developing whole-grain products using strategically sourced grains and heirloom wheat varieties. Experimenting with different techniques and grains from local farmers, she is aiming for complex, delicious results.

Diggs has cooked at the Martha's Vineyard spot where the Obama family dined, reportedly launched the smoking trend in DC and, most recently, guided Il Palio through its first major renovation in nearly three decades. He used the makeover time to launch an entirely new menu featuring one ingredient, smoke, with the help of a custom wood-fired grill. Both the interior and the menu were tailored specifically to Millennials, with features like a large communal chef’s table, open kitchen and foods designed for sharing.

It’s tough to snag a seat at L’Artusi, thanks in no small part to the inspired work of  Shambura, promoted a year ago to executive chef at this West Village Epicurean Group concept. A veteran of Wylie Dufresne’s WD-50, Jean-Georges Vongerichten’s The Mercer Kitchen and Mario Batali’s Del Posto, her passion for Italian cuisine blossomed during three years as sous chef at another of Batali’s eateries, Lupa. Now at L’Artusi, she shares Epicurean Group’s passion for using thoughtfully sourced ingredients to create soulful food.

When John Besh approached Landry about creating a restaurant, Landry jumped at the chance, which would allow him to showcase seafood while simultaneously revitalizing a part of town that had been hard hit by Hurricane Katrina. A Big Easy native, Landry is passionate about two things: regional food traditions and Gulf seafood conservation. Borgne gave him the perfect vehicle to show off both. Landry is also a community leader, working closely with the John Besh Foundation as a mentor for Chefs Move! scholarship winners and at-risk youth.

Typically we don’t choose people for this list if they aren’t actually working in a restaurant or a related business, but Connaughton’s soon-to-open project has generated so much advance buzz that an exception was in order. Eater has called Single Thread Farms Restaurant & Inn the biggest opening of 2016. Why? A menu of hyperlocal foods prepared with global techniques, an eye to Japan and innovation in the kitchen. “Californa aesthetics, French and Japanese technique and modernist rigor will all come to bear,” Eater predicted. We can’t wait to see where this one goes.

The trailblazing Castelluci runs a handful of the city’s hottest eateries, including Cooks & Soldiers, The Iberian Pig, Double Zero Napoletana and Sugo. Apart from his budding empire, the 30-year-old Cornell graduate also cofounded We&Co, a restaurant staffing website, and is an advisor to and investor in Gather, a hospitality technology company.

Jared Wentworth already has earned more than his share of Michelin stars, but the latest star celebrates an unlikely concept, the beer-centric Dusek’s Board & Beer. It’s also the only Michelin-starred restaurant to be located in the same venue as a live concert hall. Wentworth’s ale-focused menu takes “dinner and a show” to an entirely new level. With Dusek’s, Wentworth has cemented his “chef for the people” reputation.

She dabbled in desserts as a kid, but an extraordinary croissant tried during a college study-abroad term in Florence, Italy, really opened her eyes. Chow sharpened her pastry skills at Eleven Madison Park and Pearl & Ash. At the recently opened Kat & Theo, her modern interpretations of classics perfectly balance sweet and savory, creamy and crunchy. For instance: a deconstructed carrot cake with white chocolate and espresso ice creams and crumbled pistachios; or chocolate cremeux and crumble with lemon-thyme meringue and lavender brittle. Order your own--we’re not sharing. 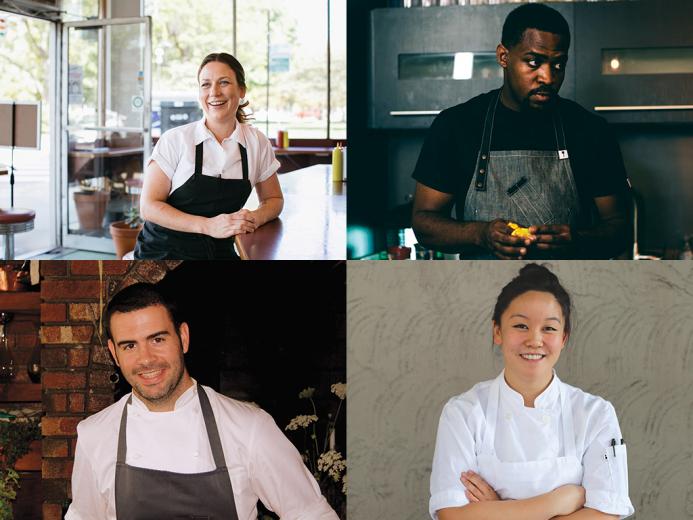