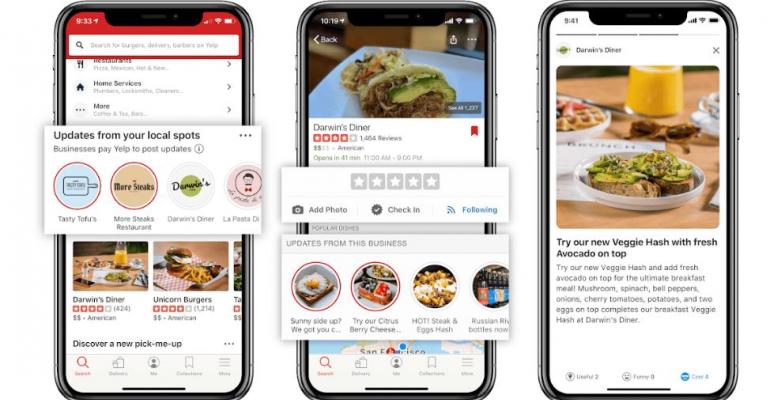 On Thursday, Yelp introduced a new set of features that will allow restaurants to reach more diners and optimize wait lists.

Yelp Connect is a fee-based portal designed as a place for restaurants to boost their image by sharing real-time updates with diners about new menu items, happy hour deals and special dining events.

Think of it like a status update or a story posted on a social media channel.

“Restaurant owners will have full control of their updates,” Yelp said Thursday. “Users will find updates on their app homescreen, as well as in a personalized weekly email from restaurants we know they’re interested in.”

Diners can follow their favorite restaurants using an RSS-style feed.

Kathryn Gianaras, owner of NOVY Restaurant in San Francisco, said Yelp Connect has given her a new way to reach existing and potential new customers.

“It’s a great way to present your restaurant exactly how you want to be presented,” she said in a statement. “Being able to scroll down our page and see our own photos and updates that we posted makes us look a lot better on Yelp and is helpful for our guests to see. Plus, I like that I can set expiration dates for my posts, especially for holidays and events so I can set it and forget it.”

Yelp Connect is a new paid section of Yelp Business page, which restaurant owners can claim for free.  A paid subscription for Yelp Connect costs $199 a month, but will be available to early adopters for $99 a month for a limited time, Yelp said.

Waitlist, which Yelp acquired in 2017 when it was called Nowait, allows diners to put their name on a virtual wait list before arriving at the restaurant.

Notify Me enables diners to schedule a reminder for joining a restaurant’s wait list on a future visit. A push notification is sent to diners when the restaurant’s Waitlist becomes active. 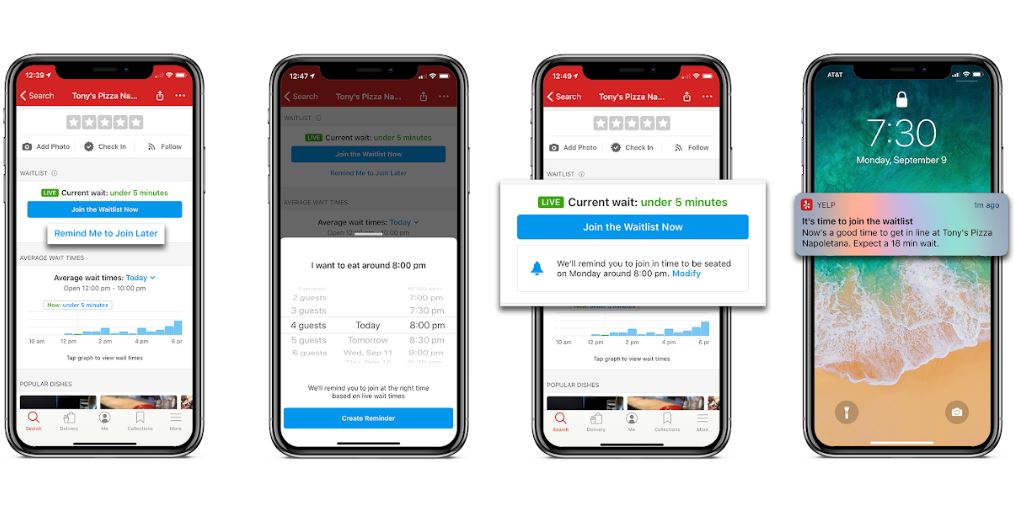 “It completely changed the dynamics for us, especially on the weekend with the busy brunch. We're not having as many walkouts. People hang on longer,” he told Nation’s Restaurant News.

He said he’s optimistic that Notify Me will give Lighthouse Café, created by the founder of Southern California-based chain Ruby’s Diner, a competitive edge because it will keep the restaurant "top of mind" with diners.

“To me, it's like spoon feeding the guest the opportunity to come to me,” Belshe said.

The new features are free for Waitlist subscribers. Fees start at $249 a month, Yelp said.

Waitlist and Yelp Connect are part of Yelp's growing arsenal of tools aimed at connecting users with businesses. The San Francisco-based company has made efforts over the years to evolve from being a discovery only platform to a one-stop destination that caters to both consumers and businesses. The company is particularly focusesd on serving restaurant owners, who often have mixed feelings about the power of Yelp and its users.

“We’re focused on helping restaurants build stronger relationships with customers by extending our products across the diner journey — everything from finding a restaurant, getting seated, writing reviews, and staying connected afterwards," Devon Wright, general manager of Restaurant Marketplaces at Yelp, said in a statement.

Yelp declined to comment on the article, which cited unnamed sources.