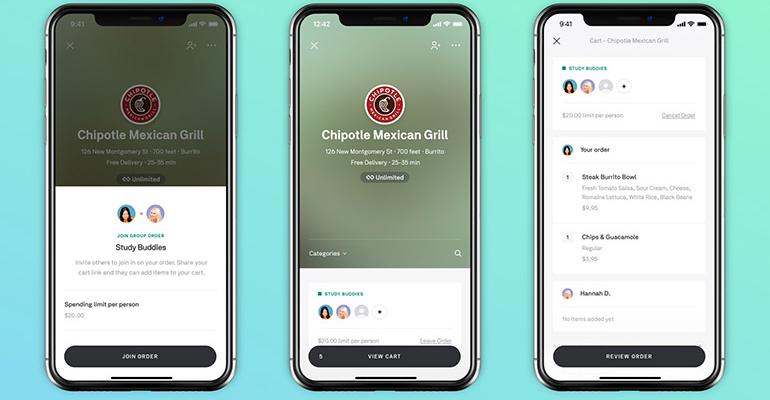 Uber Eats on Thursday said it is adding group ordering, a feature that rival delivery operators Postmates and DoorDash already have.

In a short blog announcement, the third-party delivery operator said it is adding a “Start Group Order” button on restaurant menus. It is, however, only available on the Uber Eats' website, not the app. Uber Eats said restaurants benefit because group orders “streamline individual ordering” which allows opertors to focus more time with guests.

A company representative said both consumers and restaurants have shown high interest in having a group order function. The option is available for restaurants at no additional cost to chains or independents.

Group ordering is not new to third-party delivery. DoorDash, the nation’s largest delivery operator in terms of market share, has offered group ordering through its website for four years. Group orders have been available on the app since 2017. Postmates began offering group orders through its app in late August. Grubhub has a group order function but it is tailored for workplace meals, not consumers.

Underscoring the fierce delivery battle in the U.S., this week San Francisco-based Postmates said it is ending its operations in Mexico City so it can focus on growth in the U.S.

“We continually review our business to ensure that staffing is aligned with current business needs and have made small adjustments as a result," the company said. “We will support the affected employees in their transition and thank them for helping us establish ourselves over the past two years in Mexico City.”

In other Postmates news, TGI Fridays added the company as a delivery partner.

The Dallas-based casual dining chain is the latest brand to expand its delivery footprint by working with multiple last-mile operators.

Postmates’ "large national presence and reputation for reliable service made them an ideal partner” for TGI Fridays, CEO Ray Blanchette said in a statement.

The move comes as chains like McDonald’s and Applebee’s move away from exclusive delivery partnerships to reach more consumers. The industry is also pushing back when it comes to third-party delivery fees, and ownership of consumer data. Chains are using multiple delivery partnerships to negotiate favorable terms, while expanding their footprint amid the ever-growing on-demand economy. 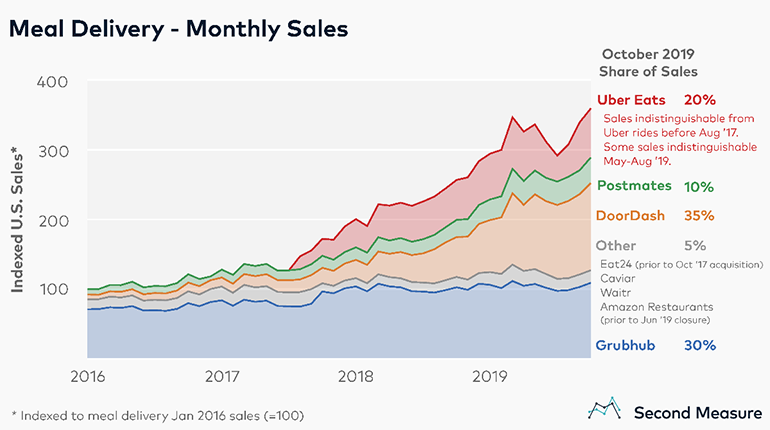 Tech Tracker keeps tabs on the industry’s top delivery operators, a crowded field whose main players are DoorDash, Uber Eats, Postmates and Grubhub. In terms of meal delivery sales, DoorDash is the industry leader with a 35% share in October, compared to 30% for Grubhub, according to Second Measure, a firm that analyzes U.S. consumer spending.

Though DoorDash continues to widen its lead over Chicago-based Grubhub, Second Measure said each company has strengths in different U.S. markets.

Grubhub and its subsidiaries is the most popular service in New York, Boston and Philadelphia. DoorDash, however, is dominant in Dallas-Fort Worth and Houston, Second Measure said in a November report.

Postmates has a strong foothold in Los Angeles and the Southwest.

Waitr, a boutique third-party delivery operator based in Louisiana, has been warned by Nasdaq that it could be delisted because its stock has remained below $1 per share for the last 30 consecutive business days.

According to a regulatory filing, Waitr said Nasdaq gave the third-party delivery operator until June 1, 2020 to comply. To regain compliance, the bid price of Waitr’s common stock needs to close at $1 or more per share for a minimum of 10 consecutive business days before the June 1 deadline, the company said.

Waitr differentiates itself by working with chains and independent restaurants in cities with populations ranging between 50,000 to 750,000. The company’s drivers are W-2 employees not contractors.

In its latest quarter, Waitr reported a net loss of $220.1 million and revenue of $49.2 million. Waitr also owns Bite Squad. 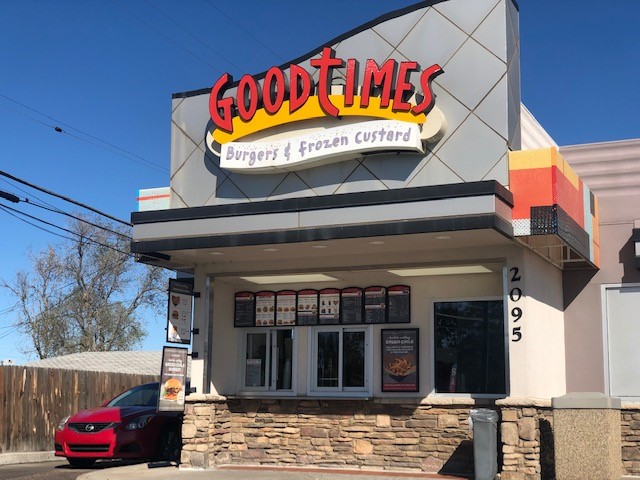 Valyant AI, a Denver-based startup specializing in conversational AI systems geared for quick-service drive through lanes, is trying out a new male counterpart to its female voice assistant, Holly.

The company has been testing Holly, a computerized voice bot, at Good Times Burgers & Frozen Custard in Denver. While the technology was working flawlessly to take orders at the drive-thru, Valyant said many customers still expressed a desire to talk to a “real” person.

Using recordings of a male voice, Valyant is now testing “Graham” at the drive-thru.

So far, customers are liking what they hear.

Carpenter’s company is at the forefront of conversational AI at the drive-thru, a niche area of focus for his company.

“Beyond augmenting human employees and helping out at the speaker, AI will one day be able to recognize each car's past orders or suggest recommendations based on time of day, weather or other factors. We believe AI will truly revolutionize the future of customer service across the QSR space,” Carpenter said.

McDonald’s has been testing digital menu boards that use AI for upselling. In September, the Chicago-based quick-service chain acquired Apprente, a two-year-old Silicon Valley startup that specializes in voice-based conversational technology.Chipotle is using voice assistants powered by machine learning to take phone orders at its 2,500 restaurants.

Editor’s Note: Tech Tracker looks at different technologies that are disrupting the industry and changing the way restaurants operate and interact with customers.

Got a story idea or tip? Contact Nancy Luna at [email protected]