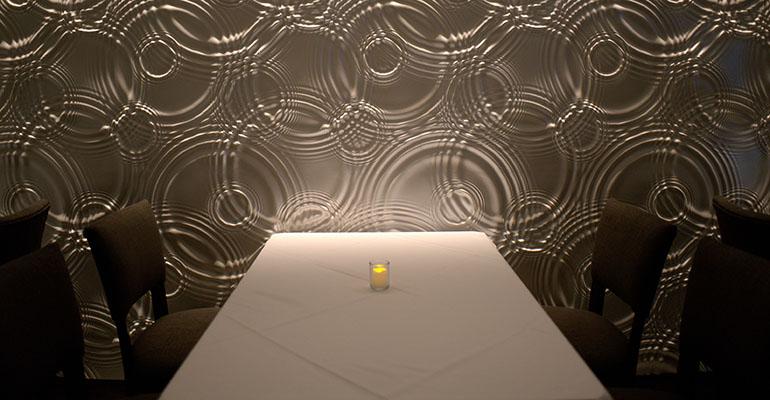 Candlelight and soft music have traditionally provided the ambience for many restaurants, but new audiovisual technologies have ushered in the potential for dazzling, experiential displays that promise to wow even the most jaded diners.

American Dreams Restaurant Group, based in Sarasota, Fla., has begun deploying some of these technologies in the forms of digital wall displays and tabletop animations.

“From the outset, an entertaining and dynamic environment was desired as component of our restaurants' ambience,” said Sean Abrams, project manager at American Dreams, which operates three restaurants in Sarasota. “We learned at our first restaurant, Duval's Fresh. Local. Seafood., the importance of movement in the ambience in order to entertain or keep guests occupied.”

While Duval’s employs windows, mirrors and sails to add motion to its environment, American Dreams uses high-tech systems that project moving images onto certain tables at Element, the company’s high-end steakhouse, and onto the walls at both Element and PBnT, the company’s fast-casual restaurant.

At Element, the company has licensed versions of the Le Petit Chef 3-D projection mapping feature from TableMation Studios. The technology, called Skullmapping, uses special projectors to display an animated scene — essentially a short cartoon that appears highly realistic — onto tabletops as diners prepare to eat.

The Le Petit Chef animation depicts a miniature chef who prepares a life-sized dish in front of diners, comically battling sea monsters and other obstacles.

In addition to the TableMation displays, which are used on two tables at Element, the restaurant also uses digital technology that appears to make the walls of the restaurant come alive with animated displays, according to Abrams. At Element, this is done via projection onto a special coating in the coves of the main dining room. At PBnT, a special digital overlay creates a random surprise on the walls for diners. “The ambience is no longer a static environment,” Abrams said. “What was displayed in the surroundings 10 minutes ago, or during a guest's previous visit, may not be there this time. Our hope is always to meet or exceed guests' expectations. Not only can we do that with our food and level of service, but with the very environment too.

The company also plans to install a TableMation tabletop display at Duval in the coming months.

John Platt, general manager at ADRG, said he sees the technology investments as part of the hard costs of design and build-out, and he said the technologies will provide a marketing advantage over time.

“As word spreads and guests continue to book reservations for those select tables featuring animations, it will be clear that the investment served its purpose,” he said.

Another type of audiovisual technology that has gained ground in Europe and is poised to gain traction in North America is the interactive tabletop.

“We're blown away with the technology,” Lloyd-Craig said. “Sure, you can get an iPad, put some technology behind it and pass it to a customer so they can place an order, but it's not as immersive as what Kodisoft showed me.”

In addition to providing a dynamic and interactive vehicle for customer ordering, the Kodisoft system allows diners to link their social media pages to the table and play games to entertain children.

“Being able to use that technology in a restaurant environment, whether it be visual cues for ordering or influencing a decision, or having the customer being able to scroll through a visual menu or buy something for the table beside them, that’s cutting edge,” Lloyd-Craig said. “Nobody is doing it.”

The tabletop technology will be a good fit for the tech campus, a 475,000-squre-foot warehouse for Internet start-up companies called Catalyst 137, which is under development. Ignite, which also owns a high-end restaurant called The Berlin in Kitchener, Ontario, will operate multiple fast-casual and grab-and-go concepts in a food-court-style venue within Catalyst 137.

Lloyd-Craig is looking at having as many as 20 Kodisoft tables in the space.

“During the day, [the building] will have 2,000 people who are developing products that will lead the future in terms of technology,” he said. “So why not provide them with an environment that has the same technology that they're helping develop?”

Dan McCann, president of Kodisoft, said the company has several independent and chain prospects in North America, and seven customers in Europe and globally.

Platt of ADRG said the future is bright for advanced audiovisual technologies in foodservice.

“I’m certain more restaurants will adopt similar technologies in the future to stay fresh and relevant, and offer guests different dining experiences than they have had before,” he said.