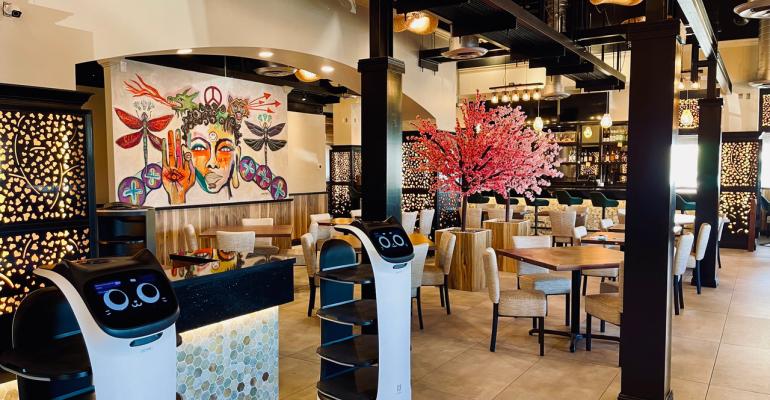 Dragonfly Brands
This New Jersey-based operator is planning an NFT sale to create a loyalty program for multiple brands under one roof.
Operations>Technology

Dragonfly to launch new twist on NFT as loyalty club

The founder of a multiconcept restaurant in New Jersey is launching an NFT project that has an innovative spin on the loyalty club trend.

Dragonfly Brands, based in Linden, N.J., has operated the Asian casual-dining concept Dragonfly for about a decade with two units — until the pandemic forced the restaurants to close and the company to rethink the model.

“This was our chance to say, okay, we’re on the brink of failure. But now it’s time to experiment,” said founder Ching Ho.

And experiment they did.

First, the company completely reworked the sit-down concept, layering in six to eight additional menus that can be ordered both in restaurant but also exist as stand-alone virtual brands for delivery out of the same kitchen.

Among the new brands are Hibachi Express, Voodoo Burger, Poke Express, Monster Mac Factory (mac and cheese), and others, including taco and barbecue offerings.

But, because operating up to eight brands under one roof is a complex operation, the next step was to streamline and reduce labor costs, said Ho.

Dragonfly Brands turned to automation on a number of fronts, bringing cute cat-themed robots into the dining rooms to help with hosting, food running, bussing and other tasks. In the kitchen, robotics assist with deep frying, for example.

The moves have allowed the restaurants to roughly double sales, said Ho. Dragonfly and sister concept Dragonfly Kitchen in nearby Woodbridge, N.J. were each doing about $2 million to $2.5 million before the pandemic. Now they are doing $10 million to $11 million in volume together, he said, and the company is looking to expend to more locations.

The next step is the Dragonfly NFT project, which is currently in pre-sale as the company prepares for a public launch.

The company’s 250 Dragonfly tokens, currently available for 1 Ethereum (which on Wednesday was worth about $1,945) offer entry into a loyalty club of sorts where members receive $100 in monthly credits to the company’s restaurants and virtual brands. A higher-tier Supper Club token also offers special access to exclusive in-real-life events, in addition to the monthly credit.

The model is similar to the private dining club membership offered by Flyfish Club, a New York City venue expected to open next year. “But you can utilize this today, rather than a Flyfish Club that hasn’t been built,” noted Ho.

A consumer buying the Dragonfly token will likely break even in about two years, assuming they use their monthly $100 credit — which would not be difficult with 14 brands available for delivery and two physical locations.

“You’re building a very loyal customer that will return more than one time per month,” said Ho.

Sale of the NFTs also generates income for the restaurants, of course, adding in another layer of revenue. And an NFT holder can resell the token, which also generates royalty income.

After testing with their own brands, Dragonfly plans to reach out to other restaurant companies to see if they would like to join in, giving Dragonfly NFT holders access to more brands beyond the 14 within the group.

“If we add 10 more restaurants, or even add grocery, the value of the token will grow,” said Ho.

Dragonfly is also planning to build on the community aspect of NFTs, with a Discord community for token holders to interact on that platform.

The past few weeks have been a volatile time for cryptocurrency holders with Ethereum losing about half its value.

Ho sees it as a bubble about to pop, which will “drive out the bad operators and scam artists,” leaving those who are “trying to use the technology as intended.”

In the restaurant world, he predicts more companies will move toward more utility-based NFT offerings, like this. “This is not vaporware,” he said. “Most NFTs are quite scammy out there.”