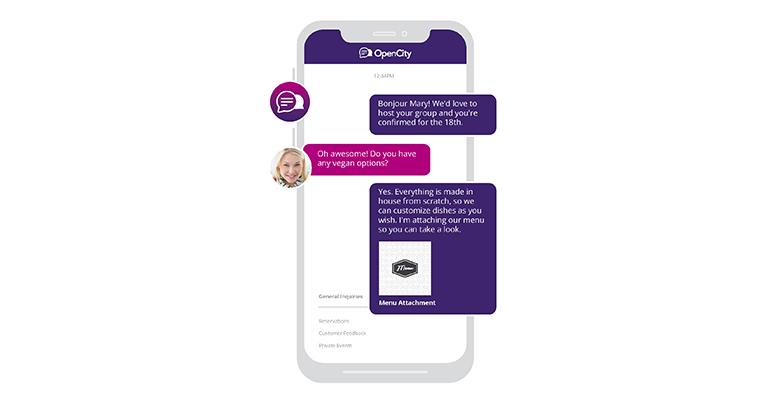 Google caused a stir in May when it introduced a new artificial intelligence system that can carry out real-world tasks over the phone, like calling for restaurant reservations.

Meanwhile, in the restaurant industry, tech companies are working to perfect chatbots that will eliminate phone calls altogether.

“Nobody wants to talk on the phone. Ninety percent of consumers want to send a text message,” said Nick Belsito, CEO of business chat service OpenCity, based in Boston. “If you’re in an office, you might not want people overhearing you. If you’re on the subway, you can’t have a conversation. You just want to text.”

For restaurants, answering the phone is time consuming, said Dave Arthurs, OpenCity’s chief technology officer. There are accents and language barriers to overcome, and restaurants can be noisy, so it can be difficult to hear. And the same questions are asked over and over.

OpenCity offers an alternative, which is a virtual assistant, or chatbot, that can answer questions 24/7 through messaging via Facebook, SMS texting or through a chat widget that can stand at the ready on a restaurant’s website.

At the 48-seat restaurant Frenchie in Boston, owner Sandrine Rossi pays $99 per month for a customized chatbot service that answers common questions through various messaging platforms. “We get so many requests online about parking and small things, like where are your eggs from, or where does your produce come from,” she said. “Now there’s a bot answering the questions for us. We don’t have to type an answer; it’s automatic. And it can answer anything we want. It’s customizable.”

The phone still rings, of course, but less often, and that frees up Frenchie’s staff to focus on guests. Rossi said the restaurant is getting more requests for private parties through the chatbot, partly because the response is immediate. Guests looking for private party space typically don’t want to wait for the operator to write a specific answer.

“They just want to know if it’s available quickly before they get into the details,” she said.

Arthurs said restaurants have the option of having questions answered by humans or by a bot — or potentially both. The conversation can start with the bot, but if questions get too challenging, a human can jump in and take the wheel, he said.

“If it’s a question about something having to do with allergies, we prefer answering that ourselves to make sure it’s handled properly,” Rossi said.

Rossi and a manager at Frenchie both get notifications when guests are messaging through the various platforms. When guests search for the restaurant through Google Search, a button also pops up that allows them to message any question directly, which Rossi said has boosted traffic.

OpenCity is working to make sure the interaction is natural and reflects the personality of the restaurant, Belsito said. For instance, Frenchie’s bot greets guests with “bonjour,” rather than “hello.”

Within a few months, the technology will evolve to allow chatbots to answer more detailed questions about the menu, like which dishes are vegan or gluten free, Arthurs said.

It’s more sophisticated than the familiar “decision tree” chatbots that consumers know from phone calls to the bank or their phone carrier, in which options are listed or answered by yes or no questions — “if you would like the sales department, press five.”

With OpenCity’s service, the user may not know they’re messaging with a bot, Arthurs said, but the bot is programmed not to engage in small talk.

“If you try to small talk with the bot, it will escalate to a human,” he said.

OpenCity’s virtual assistant officially launched earlier this year, but it was in test with live customers for about a year.

Meanwhile, another startup called Guestfriend has raised $5 million in seed funding from an investor group led by Bo Peabody, co-owner of Mezze Restaurant Group, according to TechCrunch.

Guestfriend is also developing restaurant chatbots that use more natural language to handle the range of questions that come up. The goal is to also create chatbots that can speak, using Amazon Alexa or Google Home.