Bear Robotics
Servi, a food assistant robot created by Bear Robotis, is expanding its deployment by the thousands thanks to a partnership with Softbank.
Operations>Technology

Penny, the food assistant robot, rebrands as Servi as widespread adoption is announced in Japan; demand in U.S. and abroad has surged amid COVID-19 crisis; a top national casual-dining chain is latest to test robot helpers

After months of battle-testing its food assistant robots in restaurants and casinos in the United States and Japan, Bay Area-based Bear Robotics and key investor SoftBank have announced plans to scale and rebrand the robot formerly known as Penny.

The autonomous food runner, which first hit the market in 2018, is now called Servi. Demand for the robot, which is used to help servers and food runners, has grown 10 times since the onset of the COVID-19 pandemic. That's prompted creator Bear Robotics to accelerate the mass production of Servi in partnership with SoftBank Robotics Group.  In Japan, the SoftBank robotics division announced early Monday morning that Servi will be deployed in hundreds of restaurants including more than 200 Denny’s diners in Japan, as well Yakiniku King  a popular all-you-can-eat barbecue chain.

Next up is widespread adoption in the U.S. as Bear Robotics plans to announce in the coming weeks the deployment of Servi in a “very well known” casual dining restaurant chain, co-founder and chief operating officer Juan Higueros told Nation’s Restaurant News.

Adoption by a known industry player will generate potentially thousands of new orders for the robot in the U.S., Higueros said. 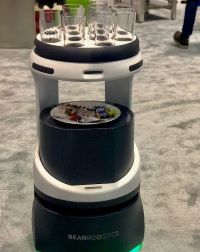 The robot acts as a food runner and can help servers clear tables.

Servi is currently being used at Amici's Pizza in Mountain View, Calif.; the Google campus in Silicon Valley; The Gardens Casino and the Boathouse Asian Eatery at The Graton Resort & Casino, both in Hawaiian Gardens, Calif.; restaurants and cafes throughout Tokyo, Japan and Seoul, South Korea and ghost kitchens in California.

“We're hoping that next year we can expand more into the Pacific Northwest. But we're trying to build our infrastructure,” Higueros said.

To accommodate demand, which began to spike at the onset of the coronavirus pandemic, Bear Robotics opened a new manufacturing facility in South Korea in April.

“We expect that the U.S. is going to probably lead in terms of robot orders and demands in 2022,” he said.

SoftBank’s interest in Bear Robotics came before the pandemic. The company led a $32 million round of Series A funding of Bear Robotics in January, expanding its investments in disruptive technologies.

Bear Robotics, however, is partnering with the company’s SoftBank Robotics Group. That division is working to develop and commercialize service robots such as Whiz, an AI-enabled vacuum-cleaning robot; and Pepper, a humanoid robot that can recognize basic human emotions and conduct conversations with people.

Both Bear Robotics and SoftBank Robotics are betting big on Servi’s ability to revolutionize the food service workforce. The self-driving robot is designed to assist, not replace, servers by tackling repetitive tasks such as delivering drinks and food to dining room tables.

Bear Robotics debuted the robot, then called Penny, at the 2018 National Restaurant Association trade show in Chicago. Since then, the company has improved the robot’s functionality including engineering it to better navigate a busy dining room. It can maneuver easily around obstacles including servers taking orders while delivering pizzas, burgers and beverages.

“Servi’s agility and object detection put its safety in a class of its own,” both companies stated in a joint press release.

Bear Robotics said Servi has shown in testing that restaurants can maximize their operating efficiency and improve customer service by deploying the robot assistant, which is available via a monthly subscription price.  In testing, for example, Servi  has helped servers to spend on average 30% to 40% more time interacting with customers.

The AI-powered navigation system allows Servi to squeeze through spaces as little as 25 inches wide.

“That’s the beauty of it. It's like a running back,” Higueros said.