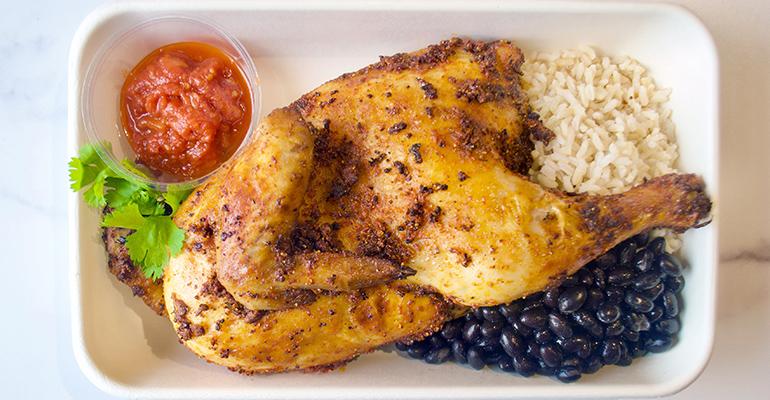 Lily Brown
The modern, comfort-food menu includes items such as a Carnitas Flatbread and a Chicken Dinner.
Operations>Technology

A new attempt at an old idea was launched in New Jersey last month with the debut of Automat Kitchen.

This is not your grandparents’ automat.

Like the automats of old, Automat Kitchen in Jersey City, N.J., features comfort food dishes dispensed through a wall of cubbyholes. But the 2021 version is operated via a sophisticated online system rather than sliding doors opened with the insertion of nickels, dimes and quarters.

Joe Scutellaro, principal owner of Automat Kitchen, first discussed the idea of rejuvenating the automat concept with a handful of partners about 15 years ago, but decided at the time that the technology they envisioned using was at that point too expensive.

“Fifteen years ago, the idea was great, but the technology wasn’t there yet,” said Scutellaro.

He and his partners did get some patents for the technology, however, and kept their idea on the back burner. Scutellaro is an accountant who works with several restaurant companies, and follows the industry closely.

About five years ago, he came across an article about Eatsa, another technology-driven automat-style restaurant that had opened in San Francisco in 2015. That led Scutellaro and his partners to take another look at their original concept to see if it might be viable today, given the evolution of the technology over the last several years.

Eatsa had expanded to several markets before closing its restaurants in 2019 to focus on becoming a supplier of technology to other restaurants. Customers of the technology include Bao Wow and Mac’d, which have deployed Eatsa’s systems to facilitate order pickup.

Unlike Eatsa, which said it had always envisioned being a supplier of foodservice technology, Scutellaro said his goal is to be a multi-unit restaurateur first, not a technology company. He said he has, however, discussed the possibility of applying the technology in institutional settings such as college campuses, airports and rest areas.

Scutellaro said he wants customers to experience the convenience of the automat of old, enhanced with the latest technology and a sleek, modern design. In the early to mid-1900s, automats were a popular foodservice trend, particularly in the Northeast, offering coin-operated vending of sandwiches and other foods. 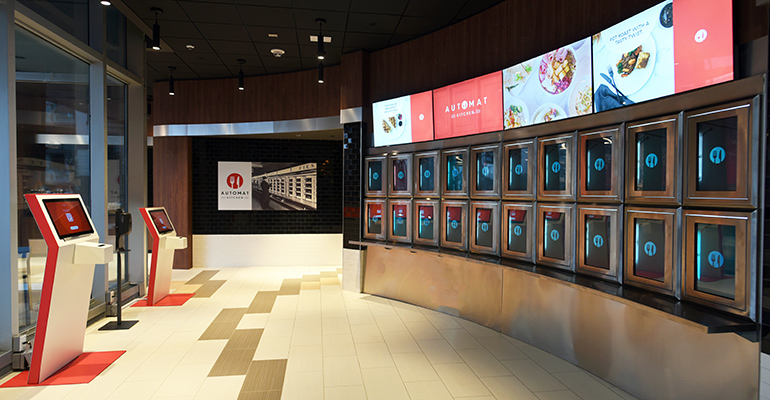 The Automat Kitchen doors open automatically when customers enter a digital code they receive via text.

To update the concept for today’s consumers, Scutellaro enlisted operational and culinary expertise from around the country, including Austin, Texas-based Philip Speer, a James Beard Award-nominated chef and restaurateur, who consulted on the project and developed the on-trend, comfort-food menu.

Breakfast menu items include the Breakfast Taco for $2.99, Pull-Apart Cinnamon Beignets for $7.99, and a Waffle Sandwich for $9.99, the latter of which has been the most popular item in the first few days since the concept opened, Scutellaro said. It includes breakfast sausage, scrambled egg and maple syrup between two waffles.

The lunch offerings include salads and sandwiches, such as the Chicken Parm Sandwich, made with pulled rotisserie chicken, marinara, mozzarella, toasted breadcrumbs, baby spinach, and fresh basil on toasted focaccia, priced at $11.99; and the vegan BB&J Toast, an open-faced sandwich made with all-natural peanut butter, banana, granola and apple butter on toasted marbled rye, priced at $8.49.

Small plates include a Mac and Cheese for $5.99 and Miso Roasted Broccoli for $6.99, while dinner entrées run from $12.99 for the Chicken Pot Pie, to $14.99 for the Massaman Curry Pot Roast and $16.99 for the Atlantic Salmon dinner plate. Beverages include coffee, fountain drinks and smoothies.

Dishes are prepared to order in the kitchen behind the Automat wall and placed by Automat staff in the appropriate compartments, where they can then be unlocked by consumers who enter a code they receive via text when their order is ready. Customers can also schedule their order for pickup at a specific time, or can order on-site via touchscreen kiosk. A QR code on-site also allows customers to connect to the menu and the ordering system. 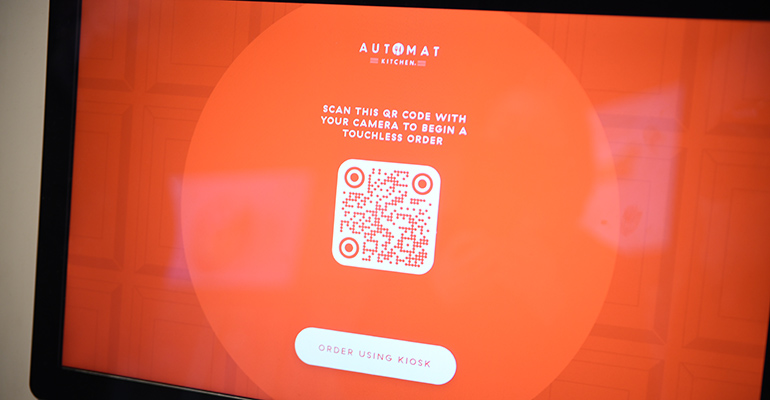 The Automat Kitchen site, located on the ground floor of a large commercial building and near a busy commuter subway station in a densely populated area just outside lower Manhattan, measures about 2,000-square feet, with indoor and outdoor seating for about 30. The site, which had previously been a Scottrade location, was outfitted with a new, modern kitchen, Scutellaro said.

Scutellaro’s son, Steve, who operates a marketing services firm in New York, has also been involved with the project, and helped secure the site, which was selected long before the pandemic hit, they said. They anticipate that the location will attract not only local workers for breakfast and lunch, but also commuters on their way home from Manhattan who preorder their dinner by phone to have it ready for pickup.

The restaurant could also drive foot traffic from the neighborhood, and from the nearby Newport Center Mall. Plans call for promoting Automat Kitchen via social media at first, and possibly with ads in commuter stations at some point.

Although the concept seems tailor-made for serving third-party delivery firms, that was not what the Scutellaros and their partners had in mind when they created the concept. During the pandemic, however, while many of the area’s commuters are working from home, the company is now considering adding delivery, particularly for the dinner daypart, to reach area residents.

“We are exploring delivery options, and we'll most likely use one of those one or more delivery services, but really that is the antithesis of what we were trying to do, which was trying to give people an in-restaurant experience, with the automat and the technology,” said Scutellaro.