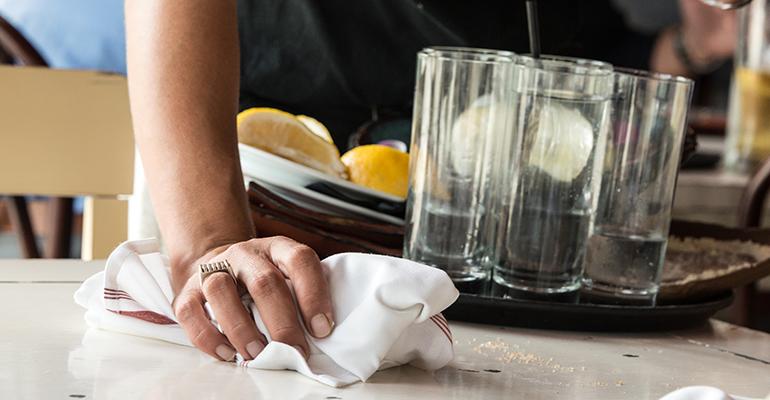 The U.S. Department of Labor on Thursday rescinded prior guidance known as the “80/20 rule” that has long prohibited employers from using the subminimum wage for non-tipped side work.

The department updated a 2009 opinion from then-acting wage-and-hour division administrator Alexander Passantino that sought to clarify the field operations handbook that explains the wage-and-hour regulations under the federal Fair Labor Standards Act.

The letter essentially eliminates an Obama-era interpretation known as the “80/20 rule,” which said tipped employees who spend more than 20 percent of working hours on non-tipped duties — like rolling silverware or prepping salads — could not be paid the subminimum wage for that time.

Many in the restaurant industry see the 80/20 rule as a nightmare, forcing them to keep track of worker hours spent on tipped versus non-tipped tasks. The issue had also become a growing source of litigation for restaurant employers.

The new interpretation, however, essentially walks back the 80/20 rule, eliminating the legal argument used by plaintiffs attorneys in such cases, said wage-and-hour attorney Eric Magnus, of Jackson Lewis in Atlanta.

With the updated opinion, the labor department recognized there are still “dual jobs,” for which workers could be paid differently.

“So if you’re a server and your employer has you come in before your shift, when no customers are there, to clean the restaurant, that’s a dual job, for which the DOL would say you should be paid the full minimum wage,” said Magnus.

But the opinion also recognizes that restaurant servers perform both tip-generating and non-tip-generating duties during the course of a shift, and it would be difficult for employers to account for the precise amount of time spent on each task.

“We do not intend to place a limitation on the amount of duties related to a tip-producing occupation that may be performed, so long as they are performed contemporaneously with direct customer-service duties,” the opinion letter said.

In other words, it doesn’t matter whether a server spends 19 percent of working hours on non-tipped work or 25 percent, said Magnus. “You can still use the tip credit.”

The Restaurant Law Center, an arm of the National Restaurant Association, which sued the labor department earlier this year to challenge how the rule was enforced, on Thursday hailed the opinion as a victory.

Angelo Amador, executive director of the Restaurant Law Center, said the new opinion was in line with both the realities of front-of-the-house restaurant work and the intent of the FLSA.

“We feel that today’s opinion letter reflects the department’s willingness to establish a clear definition of ‘related’ and ‘unrelated’ work regarding the 80/20 rule,” he said in a statement. “This is a win-win, both for tipped workers and employers alike, and will help curb the onslaught of frivolous lawsuits resulting from the current illegal and arbitrary interpretation.”

Magnus, however, noted that the issue must still play out in court. In two circuits, courts have supported the 80/20 rule and those cases will likely have to be overturned at some point, he said.

Roy Salins, a labor attorney and partner in law firm Davis Wright Tremaine in New York, said many employers will still be subject to 80/20 laws at the state level.

New York, for example, has an even stricter 80/20 rule that forbids employers from using the tip credit for an entire shift if a worker performs non-tipped tasks more than 20 percent of the time.

Even for employers in states without an 80/20 rule that allow use of a tip credit, Salins recommended that employers hold off on making any changes to pay structure.

“It could be risky to change the way you structure compensation solely because of this opinion letter,” he said. “A new administration could come in and issue a different opinion,” potentially opening up restaurant companies to class-action lawsuits down the road.

“I would wait to see how it plays out in the courts or the legislature,” said Salins.

How independent operators can compete with deeper pocketed chains (and consumer apathy)
Jan 05, 2021